Hong Kong’s logistics businesses are struggling as the Sino-US trade dispute has led to a reduction in exports. Local expert, Ken Chung Hung-hing, suggests some possible solutions to Dai Kaiyi, including creating an ‘information alliance’ and carving a new route off a key trade corridor on the mainland. 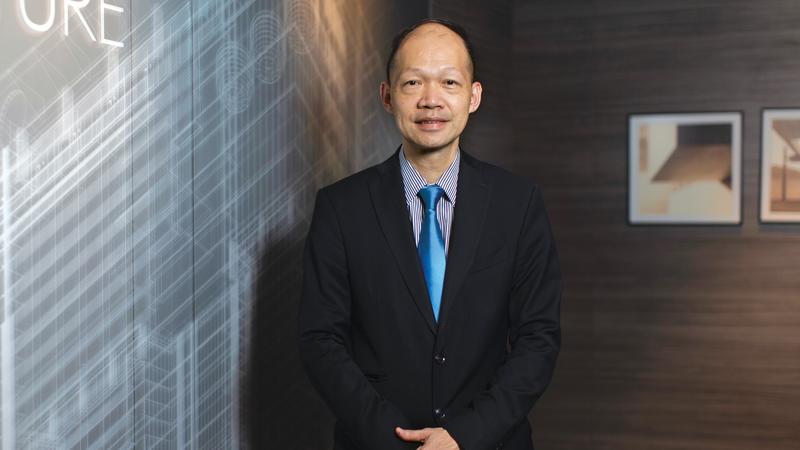 Chairman of the Chamber of Hong Kong Logistics Industry, Chung Hung-hing, foresees challenges lying ahead of Hong Kong’s logistic industry, but believes that opportunities from the Bay Area will keep it afloat. (ROY LIU / CHINA DAILY)

As ever-evolving technology reshapes global industries, having an abundant source of supplies to ship to industries is the key to getting Hong Kong’s traditional logistics industry back on track, an industry official said.

Logistics — one of Hong Kong’s four pillar industries, alongside finance, tourism and trade — has been slipping toward a less-solid footing, according to Ken Chung Hung-hing, chairman of the Chamber of Hong Kong Logistics Industry.

One problem has been the disruptive trade dispute initiated by the United States, a move by the world’s biggest economy that has derailed investment worldwide, he said.

The city felt the pinch as its April exports dropped by a worse-than-expected 2.6 percent year-on-year — the sixth month in a row they had fallen.

It’s true that logistics per se doesn’t contribute to the GDP of a region, but the potential vibrancy it could bring to all the other existing industries is immense...

In the first four months of this year, exports declined 2.5 percent over the same period in 2018, while imports fell 3.7 percent, leaving a trade deficit of HK$154 billion (US$19.6 billion).

These issues, coupled with lackluster corporate financial results, have led to mega mergers between several Hong Kong’s biggest players in the field in an attempt to cap the pressure from declining business volume.

Weathering the unexpected storm has not been easy for Hong Kong.

Having an immense scale of logistics demand, the Chinese mainland can catch up in automation infrastructure such as conveyor belts. But Hong Kong, with its shortages of land, resources and labor, is lagging behind on technology.

In addition, the constant relocation of logistics plants has also made large-scale hardware facilities less of a given, considering the collateral costs incurred with moving.

Land-use changes and rent increases occur frequently, meaning logistics plants move from their original locations to new sites every two to three years, Chung said, citing this as a reason that the industry has been reluctant to invest in R&D and the application of information technology.

Shaking off a deep-rooted mindset of reliance on hardware, Chung’s suggested way out is to establish a city logistics “information alliance”, encompassing intelligence such as warehouse stocking and resource alignment both at home and abroad.

By doing so, Hong Kong could be a bridge connecting domestic and overseas destinations by leveraging its prodigious amount of information, he said.

Formerly known as the Southern Transport Corridor, it is a trade and logistics passage jointly built by western mainland provinces and ASEAN countries under the framework of the China-Singapore (Chongqing) Demonstration Initiative on Strategic Connectivity.

The link serves as a bridge between the Silk Road Economic Belt and the 21st Century Maritime Silk Road. It connects Chongqing to Beibu Gulf in the Guangxi Zhuang autonomous region in the south by rail, and from there to Singapore and beyond by sea.

The vision, as far as Chung is concerned, could largely resolve the problem of a dwindling source of shipping goods to Hong Kong, contributing immensely to the logistics volume of the city.

Looking forward, the industry in the city is not without its challenges. Having few local industries with a logistics demand is one challenge, while increasingly expensive airport cargo transportation in the city is another, Chung said.

Air export X-ray screening will increase progressively by phases from 1 percent to 100 percent by 2024, according to the new policy of the International Civil Aviation Organization.

If everything goes according to plan, air export from Hong Kong is expected to become increasingly costly. Chung believes that in the coming years, a tremendous amount of goods, instead of going through Hong Kong, will be shipped straight through airports in Guangzhou and Shenzhen, two leading cities on the mainland side of the Guangdong-Hong Kong-Macao Greater Bay Area, as the enterprises attempt to cap costs for exporting overseas.

To resolve this issue, Chung said, a more specific alignment plan should be rolled out to align overall air transportation between airports in the southern economic powerhouse, steering clear of potential disorder or chaos among them.

In addition, the core leverage to the Hong Kong logistics industry is the capability of integrated services — its edge of interconnecting and optimizing everything from hardware, to the source of goods, to transportation via air, land and sea.

It makes sense, especially for the Chamber of Hong Kong Logistics Industry, as its members include representatives of air, land and sea transportation, epitomizing what the city is capable of when leveraging all its tools.

Also, with its sprawling scale of members in the region, the chamber knows how to use its clients’ data, on the premise of no leaked private information, to optimize distribution time and cost, lifting the overall efficiency of logistics operations.

It’s true that logistics per se doesn’t contribute to the GDP of a region, but the potential vibrancy it could bring to all the other existing industries is immense, and many of the partners-to-be on the mainland understand its advantages, Chung said.

The industry doesn’t always ignore technology and its power, as the advancing applied science did come into play in one particular area — handling and processing private documents via blockchain-powered systems.

A large number of documents have to be handled in an integrated manner, such as those in the “cold chain” — a temperature-controlled supply chain for a wide range of products, including frozen seafood, photographic film and chemicals, Chung said, elaborating application scenarios of new technologies such as blockchain.

The openness to new tech is another way the industry can survive. With the expertise gathered from years of operation and difficult to duplicate, the city’s logistics industry could lead its mainland counterparts forward by leaps and bounds. The mainland, in return, offers huge potential for Hong Kong.

Hong Kong officials earlier pledged that the special administrative region will pump HK$1 billion into an existing matching fund — the Dedicated Fund on Branding, Upgrading and Domestic Sales (BUD) — to subsidize companies boosting their brands and upgrading their products for sale abroad.

Upon submitting the BUD Fund application, the chamber has paid visits to cities in the Bay Area such as Zhuhai, Zhongshan and Macao, and is planning to cover more in the coming months in a bid to discover applicable technology that could be transferred to Hong Kong’s logistics industry.

“Our visit to the mainland cities is also an attempt to push the industry to keep track of technology advances,” said Chung, adding that as a member of Hong Kong Logistics Development Council and Hong Kong Trade Development Council, he hopes he can narrow the gap between the government and the businesses in a bid to facilitate a more efficient ecosystem.

If there is something that led Ken Chung Hung-hing to where he is today, it’s his vision and perseverance.

The Hong Kong-born logistics pioneer belongs to part of a generation that knows what a pre-e-commerce world was like.

The birth of e-commerce nearly two decades ago coincided with Chung’s admission to the University of Royal Melbourne Institute of Technology as a logistics management major.

With individual business setting up their own online shops, moving part of their business onto the internet and delivering goods with a primitive model of distribution compared to today’s, conditions left much to be desired.

Due to the absence of any centralized authority for the business-to-customers model — such as the kind that Alibaba’s Taobao has in place today — more often than not, goods ordered online by customers either were sent late or even got lost en route, leading to low credibility of online delivery.

Today, sellers have to pay a deposit to an online retailor in the first place just in case of fraud, greatly lowering the possibility of that occurring however tremendous the volume is. Likewise, the logistics infrastructure can always catch up with a digital-powered, diversified distribution model.

But right before the dawn of this brand new e-commerce era, Chung had to survive the darkest hours without knowing what had to happen to the industry, and he made it through with perseverance.

“The traditional type of logistics is doomed to be replaced,” said Chung, who knew long time ago that the logistics management expertise alone is not enough, which is why he kept his finger on the pulse of a tech-savvy era in hopes of experimenting how the ever-advancing technology could merge with the traditional industry.

Having experienced the earliest e-commerce, Chung witnessed how its O2O (online-to-offline) business model morphed into solely an offline model, given the insufficient logistics infrastructure to support deliveries of internet orders at the time.

All the background in the past 20 years has equipped Chung to be where he is today. As a bridge himself that connects the government and the businesses, he’s a strong candidate to bring the game to the next level.