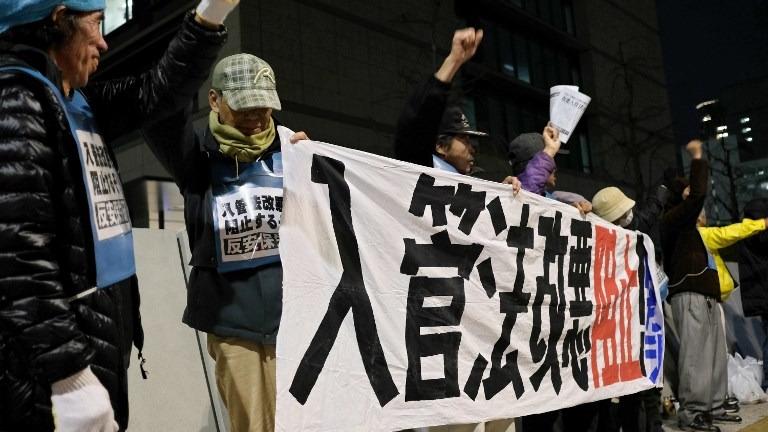 People stage a rally against a bill to allow more foreign workers in front of parliament in Tokyo on Dec 7, 2018. (KAZUHIRO NOGI / AFP)

TOKYO — When a young Vietnamese woman found out late last year that she was pregnant after arriving in Japan on a “technical trainee” visa, she was given a stark choice: “Have an abortion or go back to Vietnam.”

But returning home would leave her unable to pay back the US$10,000 she borrowed to pay recruiters there.

“She needs to stay to pay back her debts,” said Shiro Sasaki, secretary general of the Zentoitsu (All United) Workers Union, who has advocated on her behalf and said such threats were common.

Buoyed by hopes of higher wages but burdened by loans, Vietnamese youth - the fastest-growing group of foreign workers in Japan - will be among those most affected by a new scheme to let in more blue-collar workers that kicks off in April.

“Trainees from China have been declining as wages there rise with economic growth, while in Vietnam, unemployment is high for youth with high education levels, so many young people want to go abroad to work,” said Futaba Ishizuka, a research fellow at the Institute of Developing Economies, a think tank.

The technical trainee program is widely known as a back door for blue-collar labor in immigration-shy Japan. Reported abuses in Japan include low and unpaid wages, excessive hours, violence and sexual harassment. In Vietnam, unscrupulous recruiters and brokers often charge trainees exorbitant fees.

Such problems will persist and could worsen under the new system, aimed at easing a historic labor shortage, according to interviews with activists, academics, unionists and trainees.

Prime Minister Shinzo Abe, whose conservative base fears a rise in crime and a threat to the country’s social fabric, has insisted that the new law, enacted in December, does not constitute an “immigration policy.”

“In fact, Japan is already a country of immigrants. But because they say it is not an ‘immigration policy’ and the premise is that people will not stay, they only take temporary steps,” said Japan Civil Liberties Union director Akira Hatate. “The needs of society are not met, and the needs of the workers are not met.”

The trainees system began in 1993 with the aim of transferring skills to workers from developing countries. But persistent abuses developed early on, experts say.

Those issues were spotlighted last year during debate over the new law.

Among the high-profile cases was that of four companies’ using trainees for decontamination work in areas affected by radiation after the March 2011 Fukushima nuclear disaster. Two firms, also accused of not paying appropriate wages, were banned from employing trainees for five years; the others got warnings from the justice ministry.

A labor ministry survey published in June showed more than 70 percent of trainee employers had violated labor rules, with excessive hours and safety problems most common. That compared to 66 percent for employers overall.

The Organization for Technical Intern Training (OTIT), a watchdog group, was set up in 2017. This month, it issued a reminder to employers that trainees are covered by Japanese labor law. It specifically banned unfair treatment of pregnant workers.

Harsh conditions led more than 7,000 trainees to quit in 2017, experts say, many lured by shady brokers promising fake documentation and higher-paying jobs. Almost half were from Vietnam.

Because trainees are not permitted to switch employers, leaving their jobs usually means losing legal visa status. A few go to shelters run by non-profit groups or get help from unionists; many disappear into a labor black market.

“The situation is completely different from what they were told back home,” said Shigeru Yamashita, managing director of the Vietnam Mutual Aid Association in Japan. “They have debts they cannot repay with their salaries at home, so the only option is to flee into the black market for labor.”

The new law will allow about 345,000 blue-collar workers to enter Japan over five years in 14 sectors such as construction and nursing care, which face acute labor shortages

The new law will allow about 345,000 blue-collar workers to enter Japan over five years in 14 sectors such as construction and nursing care, which face acute labor shortages. One category of “specified skilled workers” can stay up to five years but cannot bring families.

A second category of visas - currently limited to the construction and shipbuilding industries - allows workers to bring families and be eligible to stay longer.

Nguyen Thi Thuy Phuong, 29, left her husband and elementary-school-age child home in Vietnam to work as a trainee in a knitwear factory in Mitsuke City in northern Japan.

The textile industry was not included in the new visa program after coming under fire for the high number of labor violations in its trainee programs.

Now she wishes she could bring her family and stay longer than three years.

“Life in Japan is convenient, and the air is clean,” she told Reuters in careful Japanese during a break from work.

For-profit employment agencies and individuals can register as liaisons between recruiters and employers. These “registered support organizations” will not need licenses.

Immigration authorities will provide oversight of the new foreign workers; the labor ministry’s immigration bureau will become an agency on April 1, a bureaucratic distinction that gives it more clout.

On Friday, the justice ministry issued fresh rules for the new system, including a requirement that foreign workers be paid at least as much as Japanese employees.

But Sasaki said the agency’s focus would be residence status, not labor conditions.

Some companies have woken up to the risk of losing investors if they or their suppliers violate workers’ rights, said Japan Civil Liberties Union’s Hatate.

But the rush to implement the new law has left local authorities worried that too little has been done to support and integrate more foreigners.

“If there is not a proper framework to accept them and they are thought of as purely a way to fill the labor shortage, for certain there will be major problems,” Yuji Kuroiwa, governor of Kanagawa Prefecture near Tokyo, told Reuters.

Takashi Takayama, whose Vietnamese name is Cao Son Quy, fled Vietnam as a refugee in 1979. He recalled how foreigners were laid off in droves after the 2008 global financial crisis and fears a similar scenario when demand for labor eases after the 2020 Tokyo Olympics.

“When the Olympics are over, I think a tragic event will occur,” Takayama said at a Vietnamese New Year celebration at a Catholic church outside Tokyo. “I don’t want to see that.”