The Legislative Council on Tuesday approved a funding proposal to inject as much as HK$5.45 billion ($700 million) into Hong Kong Disneyland Resort for its expansion despite the park reporting losses since 2015 amid a drop in visitors from the Chinese mainland.

A tourist expert, however, suggested the government should diversify its tourism products as the market matured.

The expansion of Disneyland, one of the city’s two main theme parks and tourism sites, would bring as much as HK$41.6 billion in revenue to Hong Kong, Secretary for Commerce and Economic Development Gregory So Kam-leung said after the Finance Committee of LegCo approved the proposal with a vote of 30 for and 24 against.

The expansion would create between 5,000 and 8,000 job openings once completed.

The Walt Disney Company had originally asked the government to shoulder 53 percent of the estimated HK$10.9 billion expansion cost, while the entertainment giant would pay 47 percent. After negotiation, the government agreed to invest with a funding cap of HK$5.45 billion, half the budget.

According to the expansion plan submitted to the city’s legislature, the theme park will launch at least one new attraction almost every year from next year to 2023, including a brand-new Frozen-themed area, using the beloved character and scenes from blockbuster Frozen.

The park tallied a loss of HK$148 million for 2015 after a 700,000 drop in visitor numbers from 2014. Last year losses grew to HK$171 million and visitor numbers fell a further 10 percent as mainland arrivals declined. 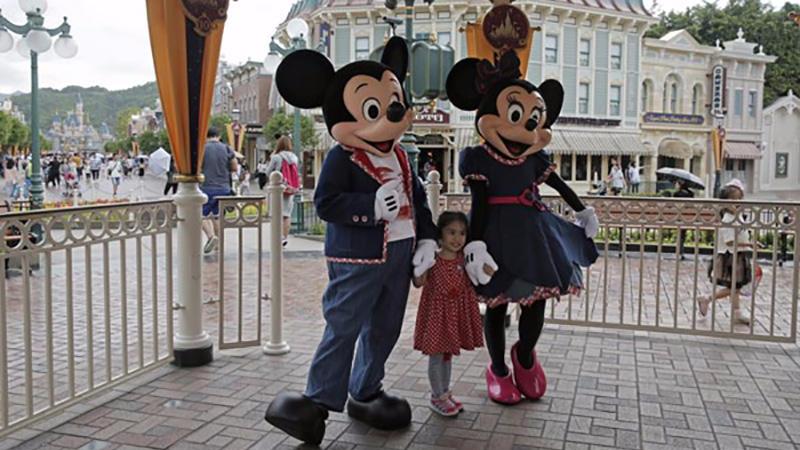 In this June 10, 2016, file photo, a girl poses with Mickey and Minnie Mouse at the Hong Kong Disneyland in Hong Kong. (AP Photo/Kin Cheung, File)

Adding to the woes, in June last year the first Disneyland theme park on the mainland opened in Shanghai, drawing away the major proportion of Hong Kong’s target visitors.

Disneyland was not the only tourist site to suffer. Hong Kong’s home-grown theme park – Ocean Park – last year announced the biggest deficit it has suffered in the past three decades, spilling HK$240 million in red ink amid the decline in mainland tourist numbers.

Professor Song Haiyan, associate dean and chair professor at the School of Hotel and Tourism Management at Hong Kong Polytechnic University, said the expansion of Disneyland would have a positive impact on the city’s tourism industry but he stopped short of giving the extent of the positive impact.

For example, Song proposed Hong Kong to put more effort into building the city as a destination for culture and art lovers, inviting internationally renowned bands and artists to perform in the city to attract music lovers as well.

"The tourists are maturing and we should solicit visitors from all over the world and diversify our target tourists as well,” said Song.

Shopping and the existing tourist sites have already lost their charm; South Korea and Japan are becoming new destinations for mainland and Asian tourists, he noted.

Willa Wu contributed to the story.