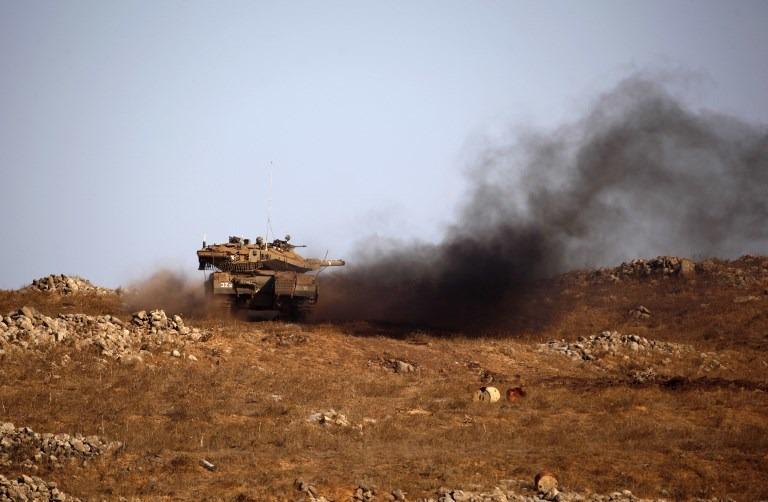 An Israeli army tank manuevers during a military exercise simulating conflict with Lebanese movement Hezbollah, in the Israeli annexed Golan Heights, near the Syrian border on Sept 6, 2017. (JALAA MAREY / AFP)

JERUSALEM — Israeli Prime Minister Benjamin Netanyahu said on Wednesday that exposure of a Hezbollah unit in Syria's Golan Heights was just "the tip of the iceberg," sending a threat to the Shi'ite group over its alleged efforts to entrench itself in the country.

The remarks came after the Israeli army said that intelligence suggested that Hezbollah has built a unit called the "Golan File" along the cease-fire line in the Syrian Golan Heights.

READ MORE: Netanyahu threatens to use 'lethal force' against Hezbollah

Speaking in a video statement, Netanyahu said that the unit "was part of Iran's aggression against Israel."

He warned that Israel will take actions against Iran and Hezbollah.

"We will continue to use all means ... to block Iran's efforts to use Syria, Lebanon, and Gaza as forward bases for attacking Israel," he said.

Israel seized part of the Golan Heights during a war in 1967. It later annexed the territory, claiming it as part of Israel, in an act never recognized internationally.

The announcement came amidst renewed efforts by Netanyahu to achieve recognition from the US of Israel's acclaimed sovereignty over the Golan.

The last round of full-fledged war between Israel and Hezbollah took place in southern Lebanon in 2006. The 34-day war ended with a fragile truce.