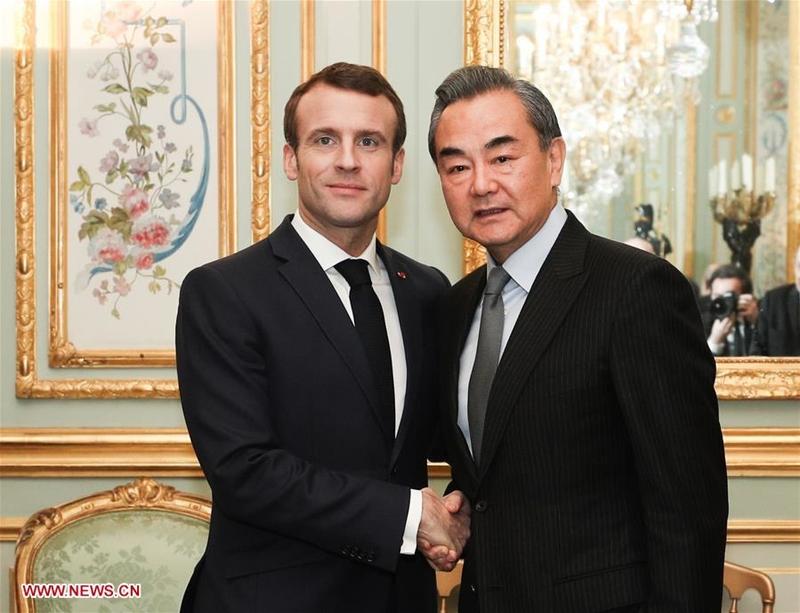 China and France have pledged to strengthen coordination in international affairs to safeguard multilateralism while promoting bilateral ties as they celebrate the 55th anniversary of their establishment of diplomatic relations this year.

In talks with visiting State Councilor and Foreign Minister Wang Yi at Elysee Palace in Paris on Wednesday, French President Emmanuel Macron said his country considers relations with China to be of great importance. He also said his country hopes to take advantage of the 55th anniversary of their diplomatic relations to promote high-level exchanges between them.

France stands ready to deepen cooperation with China in such fields as trade, investment, nuclear energy and aviation as well as enhancing cultural, educational and youth exchanges, he added.

Macron said France welcomes Chinese companies and is willing to intensify communication and coordination with China in international affairs and jointly safeguard multilateralism.

READ MORE: Macron calls for cooperation with China on multilateralism

Wang was on a visit to France for the 18th session of the consultation of the coordinators for the China-France Strategic Dialogue with the French president's diplomatic adviser, Philippe Etienne.

Wang recalled Macron's state visit to China last January, and said the consensus reached between the two presidents during the visit has been implemented as cooperation has generated positive outcomes.

All these factors demonstrate the high-level development of the China-France Comprehensive Strategic Partnership as well as the vast potential for cooperation, he added.

Wang told Macron that China is willing to intensify cooperation with France in such fields as nuclear energy and innovation as well as within the Belt and Road Initiative.

China remains committed to deepening communications and cooperation with France on multilateral agendas including climate change, and to working together to safeguard rules-based multilateralism as well as the international system with the United Nations at the core, he added.

Wang said China's door will open wider, and the country is willing to provide a good business environment for foreign companies, including France's.

There is a great deal of space for China and France to develop strategic cooperation given the rising uncertainties of Europe's political situation and the profound changes in the international landscape, observers said. That is particularly so given that both are permanent members of the UN Security Council, they said.

History has proved that when China and France join hands, they can change the world, Zhai said. At a time when multilateralism is being challenged, the world needs a strong and ambitious Sino-French relationship, he said.