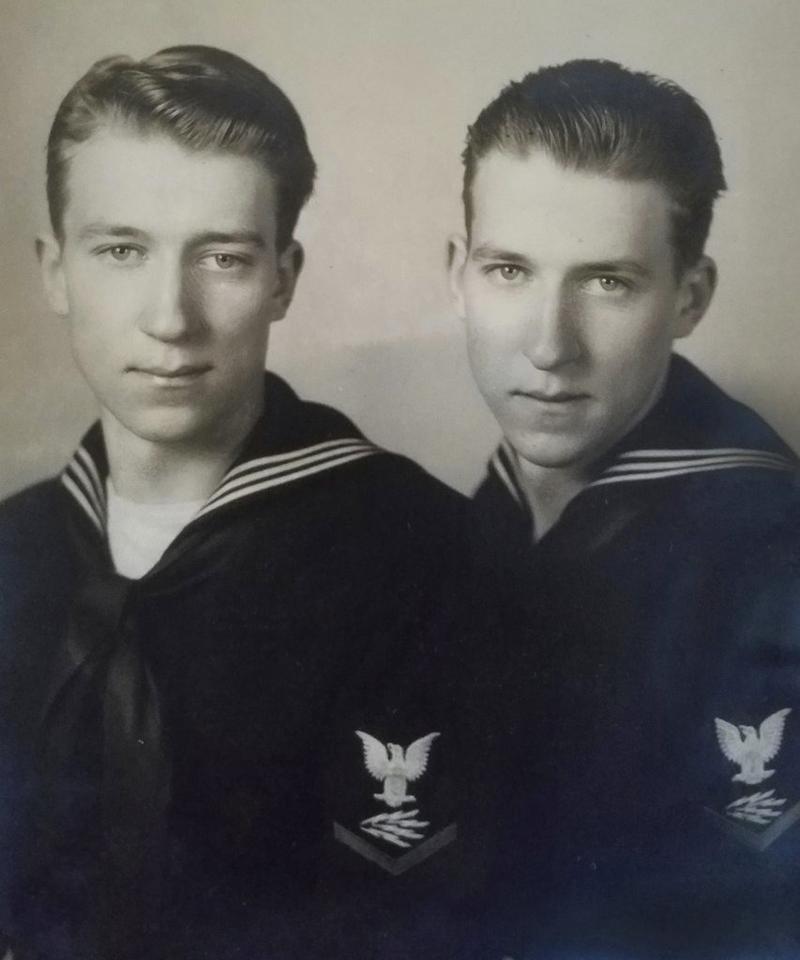 COLLEVILLE-SUR-MER, France - For decades, he was known only as Unknown X-9352 at a World War II American cemetery in Belgium where he was interred.

On Tuesday, Julius Heinrich Otto "Henry" Pieper, his identity recovered, was laid to rest beside his twin brother in Normandy, 74 years after the two Navy men died together when their ship shattered while trying to reach the blood-soaked D-Day beaches.

The two 19-year-olds from Esmond, South Dakota, died together on June 19, 1944, when their huge flat-bottom ship hit an underwater mine as it tried to approach Utah Beach, 13 days after the D-Day landings.Six Navy officers in crisp white uniforms carried the flag-draped metal coffin bearing the remains of Julius to its final resting place, at the side of Ludwig Julius Wilhelm "Louie" Pieper at the Normandy American Cemetery and Memorial.

While Louie's body was soon found, identified and laid to rest, his brother's remains were only recovered in 1961 by French salvage divers and not identified until 2017.

A lone bugler played taps as the casket was lowered in an end-of-day military ceremony attended by a half-dozen family members, closing a circle of loss. Each laid a red rose on the casket and two scattered American soil over it.

The Pieper twins, both radiomen second class, are the 45th pair of brothers at the cemetery, three of them memorialized on the Walls of the Missing at the cemetery. But the Piepers are the only set of twins among the more than 9,380 graves, according to the American Battle Monuments Commission.

The cemetery, an immaculate field of crosses and Stars of David, overlooks the English Channel and Omaha Beach, the bloodiest of the Normandy landing beaches of Operation Overlord, the first step in breaching Hitler's stranglehold on France and Europe.

"They are finally together again, side by side, where they should be," said their niece, Susan Lawrence, 56, of Sacramento, California. 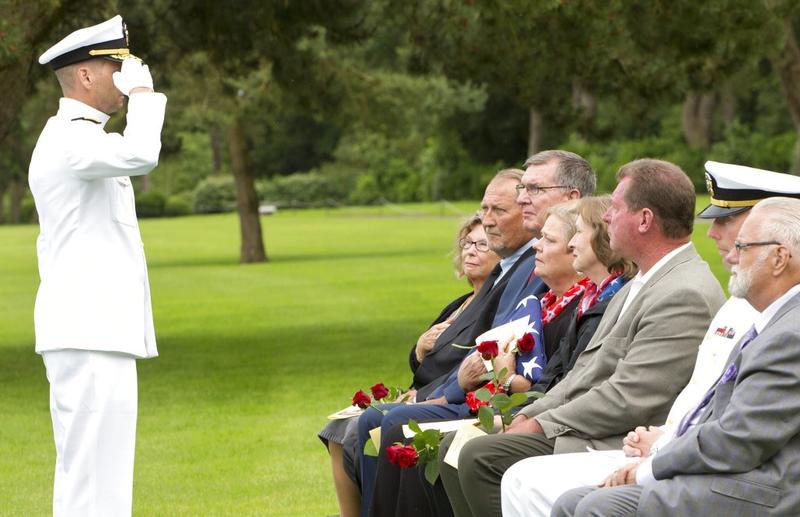 A US Navy sailor salutes the family of WWII US Navy sailor Julius Pieper during a reburial service at the Normandy American Cemetery, Colleville-sur-Mer, France, June 19, 2018. (VIRGINIA MAYO/ AP)

The story of how the twins died and were being reunited reflects the daily courage of troops on a mission to save the world from the Nazis and the tenacity of today's military to ensure that no soldier goes unaccounted for.

The Pieper twins, born of German immigrant parents, worked together for Burlington Railroad and enlisted together in the Navy. Both were radio operators and both were on the same unwieldy flat-bottom boat, Landing Ship Tank Number 523 (LST-523), making the Channel crossing from Falmouth, England, to Utah Beach 13 days after the June 6 D-Day landings. 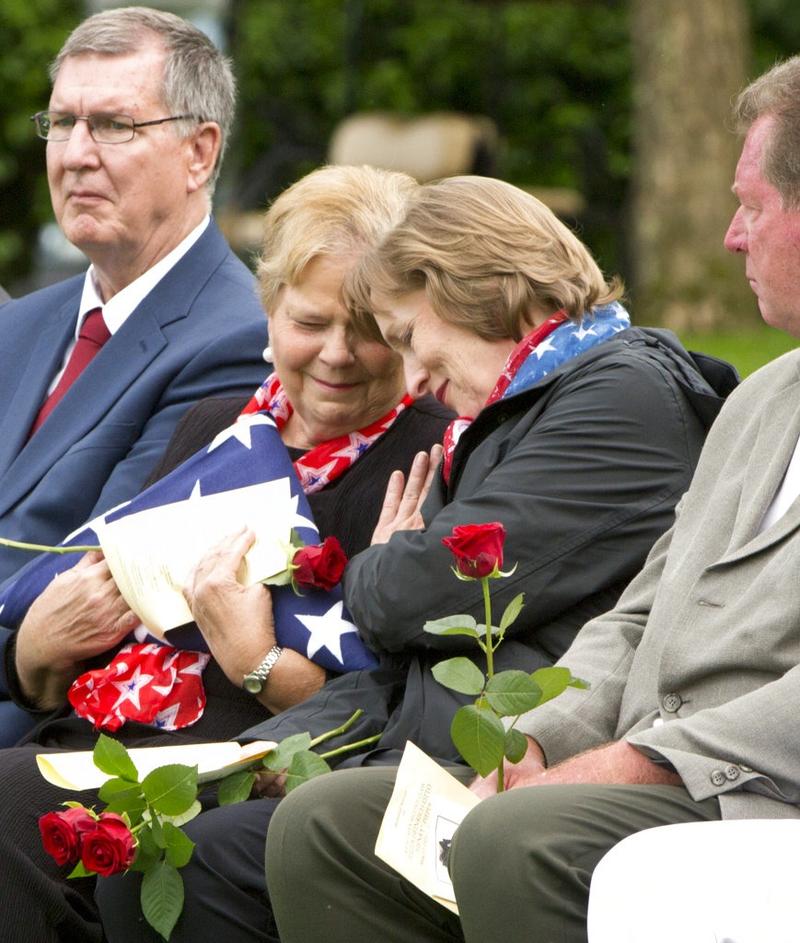 The LST-523 mission was to deliver supplies at the Normandy beachhead and remove the wounded. It never got there.

The vessel struck an underwater mine and sank off the coast. Of the 145 Navy crew members, 117 were found perished. Survivors' accounts speak of a major storm on the Channel with pitched waves that tossed the boat mercilessly before the explosion that shattered the vessel.

Louie's body was laid to rest in what now is the Normandy American Cemetery. But the remains of Julius were only recovered in 1961 by French divers who found them in the vessel's radio room. He was interred as an "Unknown" at the Ardennes American Cemetery in Neuville, Belgium, also devoted to the fallen of World War II, in the region that saw the bloody Battle of the Bulge. 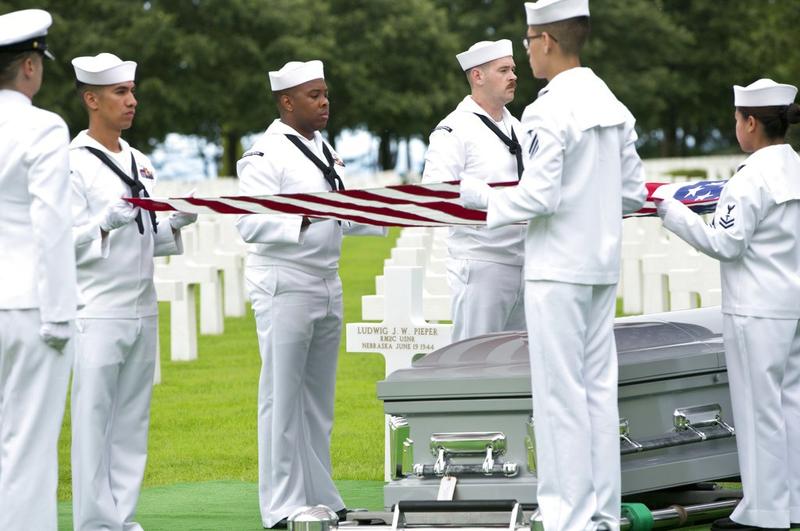 US Navy personnel hold the American flag over the casket of US WWII Navy sailor Julius Pieper during a reburial service at the Normandy American Cemetery, Colleville-sur-Mer, France, June 19, 2018.  (VIRGINIA MAYO / AP)

Julius' remains might have stayed among those of 13 other troops from the doomed LST-523 still resting unidentified at the Ardennes cemetery. But in 2017, a US agency that tracks missing combatants using witness accounts and DNA testing identified him.

Lawrence, the niece, said the brothers had successfully made the trip across the English Channel on D-Day itself, and "they had written my grandparents a letter saying, do not worry about us we are together."

"My grandparents received that letter after they got word that they (their sons) had passed away," she said.

In this photo taken on June 15, 2018, school children walk by the grave of 13 men from the Navy ship LST-523 who were never identified by name and are now buried at the Ardennes American Cemetery in Neupre, Belgium, June 15, 2018. (VIRGINIA MAYO/ AP)

The Pieper family asked that Louie's grave in Normandy be relocated to make room for his twin brother at his side.

The last time the United States buried a soldier who fought in World War II was in 2005, at the Ardennes American Cemetery, according to the American Battle Monuments Commission. 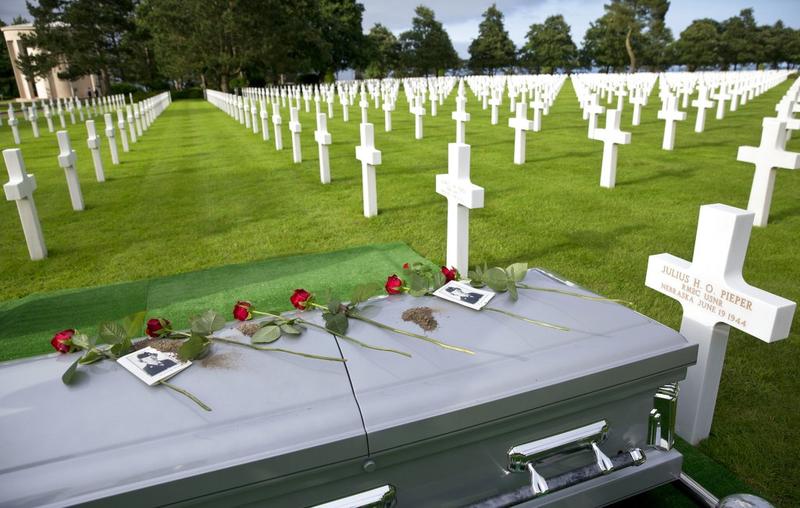 The casket of US Navy sailor Julius Pieper, right, lays next to the grave of his twin brother Ludwig, left, during a reburial service at the Normandy American Cemetery, Colleville-sur-Mer, France, June 19, 2018. (VIRGINIA MAYO/ AP)