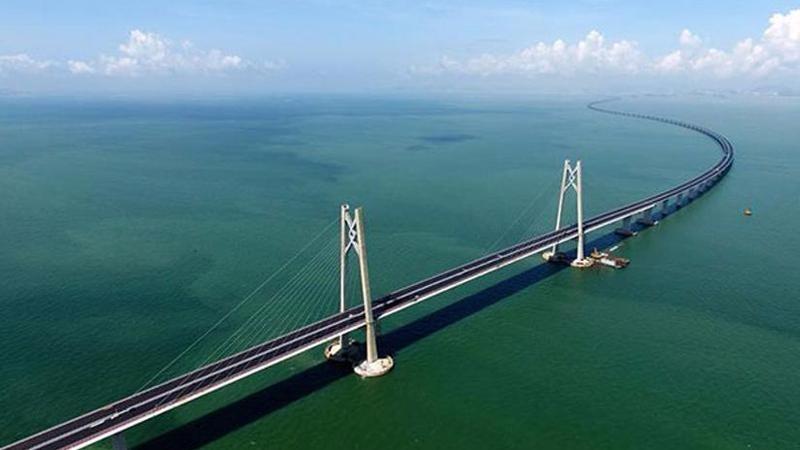 This photo shows a section of the Hong Kong-Zhuhai-Macao Bridge. (PHOTO / XINHUA)

Cross-sector leaders in Hong Kong said on Tuesday they believe the upcoming blueprint for the Guangdong-Hong Kong-Macao Greater Bay Area will lead to brighter prospects for the city.

Their remarks came after Chief Executive Carrie Lam Cheng Yuet-ngor announced the outline development plan for the Guangdong-Hong Kong-Macao Greater Bay Area would be released within days; this will be followed by an official conference in Hong Kong on Feb 21 to publicize the plan.

The plan will set out development priorities for the area — and key tasks for each city. In this way, Hong Kong could have a clearer direction for future development

Jonathan Choi Koon-shum, chairman of the Chinese General Chamber of Commerce in Hong Kong, said he believed the outline would help achieve mutual development without fierce competition among cities.

He also noted that Hong Kong had the edge in attracting international talents and providing world-class professional services. This was something important which Hong Kong can contribute to the development of the Bay Area, Choi added.

Choi belongs to one of the leading business chambers in Hong Kong — with nearly 6,000 members from the business and trade sectors.

Structural biologist Zhang Mingjie, chair professor at the Division of Life Science at the Hong Kong University of Science and Technology, said he had high expectations of the outline. Zhang believes it will benefit Hong Kong’s science and technology development.

He also anticipates a plan to further connect technology sectors of Hong Kong and the mainland. This will facilitate more career opportunities for local talents, as well as offering a larger market for knowledge transfer.

Tam Yiu-chung, the sole Hong Kong member of the Standing Committee of the National People’s Congress, the country’s top legislature, believes the plan will set out development priorities for the area — and key tasks for each city.

In this way, Hong Kong could have a clearer direction for future development, Tam said.

Song Sio-chong, professor of the Research Center of Hong Kong and Macao Basic Law at Shenzhen University, hopes the outline can bring solutions to barriers between Hong Kong, Macao and the mainland. These barriers often result from different institutional systems.

A key issue is the policy for cross-boundary traffic on the Hong Kong-Zhuhai-Macao Bridge, Song said. He said the mega infrastructure needs more flexible policies in regard to its customs and immigration arrangements, and more support facilities. This will help it to attract more traffic.

This is crucial to future cross-boundary exchanges across the Bay Area, Song stressed.

Stephen Cheung Yan-Leung, president of the Education University of Hong Kong, said the university was happy to discuss the advantages they can offer education institutions in the Bay Area. These include educating children, special education programs and training headmasters, he added.