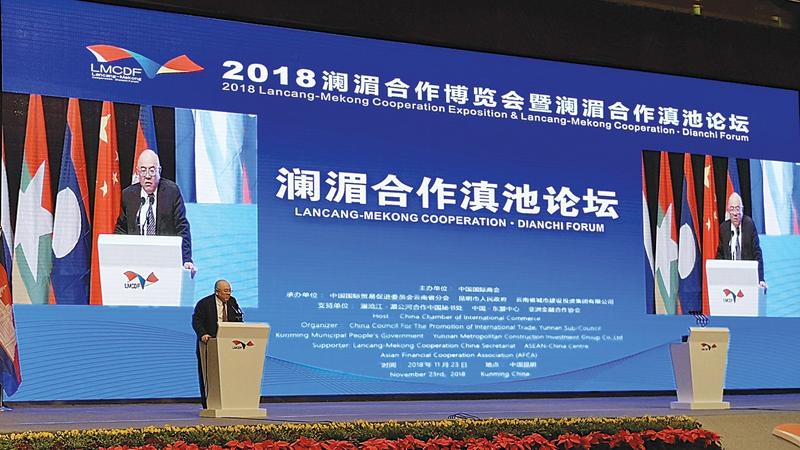 Liu Guangxi, president of the Yunnan Sub-Council of the China Council for the Promotion of International Trade, speaks at the opening ceremony of the Lancang-Mekong Cooperation Dianchi Forum in Kunming, Southwest China’s Yunnan province, on Nov 23. (PHOTO BY WEN ZONGDUO AND SHI WENZHI / CHINA DAILY)

China’s assistance and investment are tapping the growth potential of this relatively less developed region and turning it into a large market.

During the 2018 Lancang-Mekong Cooperation Exposition and Lancang-Mekong Cooperation Dianchi Forum, on Nov 23-27 in Kunming, capital of Southwest China’s Yunnan province, a number of joint projects were clinched in infrastructure, industries, finance and trade. And business, academic and administrative circles see more opportunities for a sustained and shared future.

The increasing connectivity should be addressed as paths of friendship

Speaking at the event, Ren Junhao, vice-governor of Yunnan province, encouraged all sides to jointly build up platforms and expand mechanisms to upgrade the region’s competitiveness, via enhancing programs of cooperation such as industrial parks and smart logistics, improving the business environment and speeding the flow of production elements.

He urged further improvement not only of infrastructure such as roads, aviation, water and web networks, but also software and the environment. Moreover, there should be more people-to-people exchanges — cultural, and in tourism and education, he said.

Officials from Laos and Cambodia spoke of the opportunities provided by the expo for regional endeavors in development. The region’s multifactor cooperation with China is cultivating a large-sized market while laying the groundwork for future development, noted Vice-Minister of the Planning and Investment Department of Laos, Khamchan Vongsengboun, at the opening ceremony.

Chhuon Dara, secretary of state of the Ministry of Commerce of Cambodia, said that trade, investment and people-to-people exchanges are building a new type of international partnership across the river valley. He also highlighted the prospects of cross-border connectivity in commerce, logistics, investment and tourism under the China-led Belt and Road Initiative. 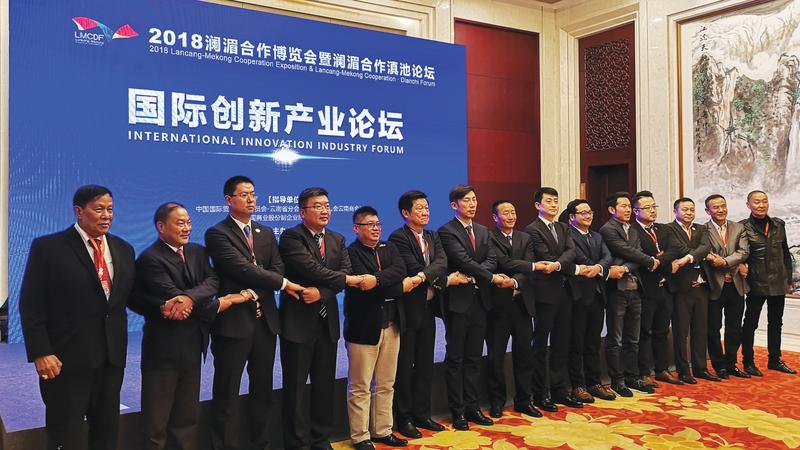 Chen Dehai, secretary-general of the ASEAN-China Centre (ACC), noted the Lancang-Mekong mechanism for cooperation has shortened development gaps among the economies and sped up regional integration. ACC, as a bridge between them, can serve as a one-stop information and activities center to promote sustained and in-depth regional cooperation, he said.

Wang Guoping, deputy secretary-general of the Asian Association for Financial Cooperation, said the six economies are in the key process of industrialization and urbanization and will take off thanks to policy support and business exchanges.

Preventing financial risks requires all six countries to join hands, Wang said. The economies need to break systematic barriers and better coordinate in all fields, as economic take-off is set to be supported by financial cooperation.

Liu Guangxi, president of the Yunnan Sub-Council of the China Council for the Promotion of International Trade, noted the region has refreshed its cooperation after the adoption in January of its five-year action plan.

He said the region has moved to upgrade its chains of industries, logistics and production value, apart from increasing interconnectivity. The sub-council co-organized this event with the Kunming government and Yunnan Metropolitan Construction Investment Group Corp.

President of the Thai-Chinese Friendship Association Korn Dabbaransi also saw potential of the six developing and emerging economies. He said there is “one belt, one river” as the Lancang-Mekong is the river of peace and harmony.

Dabbaransi, also former vice-premier of Thailand, said it is important for people of the six developing nations to come and sit together and work out mutually beneficial solutions to regional problems. The increasing connectivity among them should be addressed as “paths of friendship”, he said.

Hean Vanhan, secretary of state at Cambodia’s Ministry of Agriculture, said his country is listing sustainability into special goals and indices and promoting rural cooperatives to reduce poverty. The use of farm machinery rose from 73 percent in 2013 to 94 percent in 2017.

Oudet Souvannavong, president of the Lao National Chamber of Commerce and Industry, said that due to relatively weak infrastructure, businesses in Laos, mostly small and medium-sized, are having to catch up in industries, agriculture, tourism and logistics. 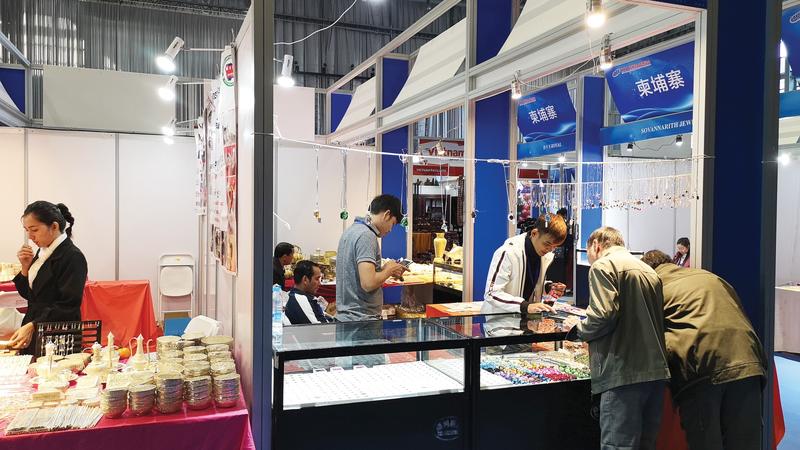 China’s former vice-minister of commerce Chen Jian suggested the region should work more on practical but not necessarily large projects, with sound feasibility studies, taking into consideration the benefits for all parties involved. He urged businesses to assume social and environmental responsibilities for the public good of the region.

Sutee Satanasathaporn, speaking for Thailand in the Greater Mekong Subregion Business Council, noted that to lift cross-border trade flow, there should be in place multilateral norms for common development. He said Thai policies on innovation, logistics and varied means of transport are in line with the Belt and Road Initiative and conducive to creating a better environment and more exchanges of talented people, goods and cultures.

Liu Guangxi added that regional connectivity paves the way for joint industrial capacity-building between the nations and he encouraged the industrial parks of different nations to coordinate their operations. The six parties along the river should shape new chains of industries, logistics and added value, he said.

“The three chains will be key to relieving poverty among local peoples, raising the economic level of ASEAN’s poorest nations and balancing their positions in the region,” Liu said in concluding remarks, making reference to the Association of Southeast Asian Nations.

During the five days in Kunming, apart from the main exposition there were also promotions held for Laos, India, and international innovation industries.

Spike Lu, executive president of the Yunnan Provincial Association for Promotion of Industrial Development in Southeast Asia and South Asia, which hosted the forum, said the delegates also discussed roles for Yunnan in connecting development of the region.

Pan Song, founding partner of QiGoal Capital, briefed a seminar on bright prospects for business in India, where e-commerce is expected to rise sharply in the coming years as diversified consumption picks up.

Exhibitors put up farm produce, packaged foodstuffs, handicrafts and textiles from Mekong River nations, plus jewelry from India and Cambodia, jade from Myanmar and Afghanistan, fine wood and furniture from Vietnam, Pakistan and Myanmar, woolen produce from Mongolia, fur clothing from Russia, automobiles from Japan and its joint ventures, and cosmetics and health products from Thailand, Indonesia and South Korea. The Mekong River is known in China as the Lancang.

Organizers of the expo and the Kunming city government adopted flexible measures including waiving entrance fees to address exhibitors’ concern over slow flow of visitors. While some exhibitors did worry about returns, many more were delighted at the exposure received by their brands and products.

Shi Wenzhi helped with this report.