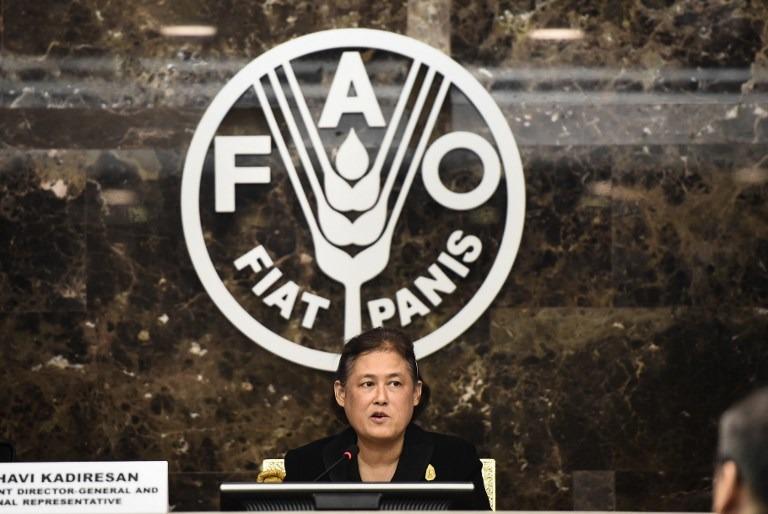 Princess Maha Chakri Sirindhorn, the second daughter of the late Thai King Bhumibol Adulyadej, speaks during the Asia-Pacific regional observance of World Food Day by the Food and Agriculture Organisation of the United Nations (FAO), in Bangkok on Oct 17, 2016. (LILLIAN SUWANRUMPHA / AFP)

DENARAU ISLAND, Fiji - Senior officials from 46 FAO members in the Asia-Pacific region have agreed that the countries within the region have made great progress in the food and agriculture sector and reduced poverty and hunger.

According to a press release by Fiji's Department of Information on Thursday, the general consensus had been reached by the senior officials who concluded their meeting on Wednesday of the 34th United Nations Food and Agricultural Organization (FAO) Regional Conference for Asia and the Pacific (APRC) on the Denarau island near Fiji's third largest city of Nadi with meaningful decisions and recommendations for the future.

Kundhavi Kadiresan, assistant director-general and FAO regional representative for Asia and the Pacific, said at the closing of the meeting that the senior officers' conference had provided an excellent opportunity to interact with members and understand their views, concerns and priorities under different agenda items.

"Our deliberations covered some of the most complex issues on the food and agriculture sector of mutual concern in a constructive and result-oriented manner in the traditional spirit of understanding and respect for different views and opinions," she said.

Meanwhile, the FAO also hailed on Wednesday 40 years of close on-the-ground presence and support to 10 of its members in Asia and the Pacific.

Between 1977 and 1979, 10 countries such as Bangladesh, India, Indonesia, Myanmar, Nepal, Pakistan, the Philippines, Sri Lanka and Vietnam agreed to host FAO representation offices in their capitals.

During a side event at the 34th Session of the FAO Regional Conference for Asia and the Pacific, FAO Director-General Jose Graziano da Silva thanked all 10 countries for welcoming FAO to their lands as a trusted partner on the ground and assured them that FAO would continue to work closely with them to ensure the future of agriculture and the safety and sustainability of food production.

In the Asia-Pacific region, FAO has prioritized improvements to nutrition and has taken action to ensure food security in the face of challenges posed by climate change and natural disasters, he said, adding that the development and implementation of Country Programing Frameworks (CPFs) have given greater focus to their technical and policy expertise, ensuring that country programs are closely aligned with government priorities.

The 34th session of FAO's regional conference for Asia and the Pacific (APRC) kicked off here on Monday with the participation of government ministers and delegates from members of the FAO.