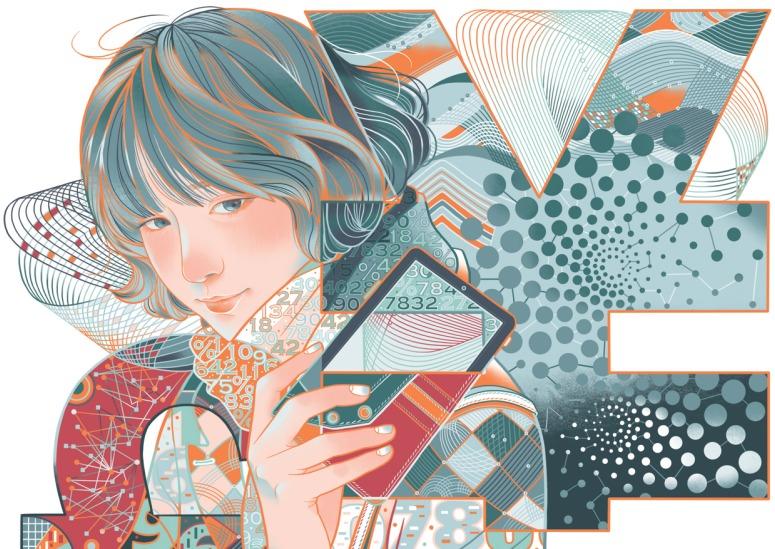 Different forms of currency have been used over the ages — such as seashells, wampum and metal coins — and in more recent times, bank notes made from paper and plastic are in wide circulation.

Nowadays, the digital era is set to redefine the features of money and the ways in which it is used.

Almost overnight, the world has started to talk about stablecoins, a new form of digital currency fully backed or collateralized by a country's fiat currency — money that the government declares to be legal tender.

Stablecoins can also be viewed as an electronic version of fiat money, or e-money, as defined by the International Monetary Fund. Different from their predecessor bitcoin, which first appeared a decade ago, their value is linked to a pool of assets that can ensure a stable price for these "coins".

Experts said that compared with bitcoin and other cryptocurrencies, stablecoins may be more capable of acting as a means of payment and for storing value.

Tobias Adrian, financial counselor and director of the IMF's Monetary and Capital Markets Department, said their value is stable compared with fiat currencies and transactions are convenient, nearly cost-free and faster than card payments.

Emoney is better integrated into our digital lives, and often issued by companies that fundamentally understand user-centered design and integration with social media

"Emoney is better integrated into our digital lives, and often issued by companies that fundamentally understand user-centered design and integration with social media," Adrian said.

Given these advantages, not only privately owned technology companies, but also government officials worldwide are rushing to announce that they will soon introduce their own form of stablecoins.

In China, residents have already accepted electronic payments, and just by carrying a smartphone can transfer money through scanning QR codes with apps such as Alipay or WeChat. IMF research showed that by May, electronic payments via WeChat Pay and AliPay had reached US$18.7 trillion, more than all the transactions handled worldwide by Visa and MasterCard combined.

This may make it easier for Chinese consumers to use digital fiat money, as the payment process could be similar, according to experts.

Observers at home and overseas have said that the People's Bank of China, the country's central bank, could be the first of the major central banks to issue its own digital currency, and customers in the country may be able to use the electronic version of the yuan before too long.

Mu Changchun, director-general of the PBOC's Institute of Digital Currency, said in the summer that after more than five years' study, the Chinese version of a central bank digital currency, or CBDC, might be introduced soon, either to create tokens based on blockchain technology or to offer accounts to the public.

"In the future, this central bank digital currency may be traded between individuals and businesses through an app on a cellphone, acting like an electronic wallet," Mu said.

Making payments with the fingertips may sound attractive, but at the same time, this unconventional type of money raises concerns related to customer protection, safety of the payments system, and financial stability.

Referring to the Chinese version of government-backed stablecoins, Mu said making a transaction could be as convenient as using cash, and will benefit the circulation and internationalization of the yuan.

"We need to ensure anonymity for both sides of the transaction, as well as meet antimoney laundering, anti-terrorist financing and anti-tax evasion requirements." The balance between anonymity and regulatory needs should be achieved, he added.

PBOC officials refer to the forthcoming digital yuan as "digital currency and electronic payment", or DC/EP, which will act as a replacement for paper bank notes, but not as a substitute for bank deposits or credit instruments.

According to official explanations, DC/EP providers act as a type of public-private partnership — the central bank has the issuing authority and the system also encourages competition between institutional and commercial providers, which can even come from the private sector.

Adrian, from the IMF, said: "If such providers can keep client funds as central bank reserves, and if these are protected from other creditors, then, by proxy, e-money users can hold, and transact in, a central bank liability. Isn't that the very definition of a central bank digital currency?"

Liu Yan, assistant general counsel with the IMF Legal Department, told China Daily earlier in an exclusive interview: "There is no one-size-fits-all solution for central bank digital currency. Benefits and risks will have to be fully weighed by each country independently. End-user demand will vary with the relative attractiveness of other forms of money."

Most of the "first generation" of crypto assets, mainly created based on blockchain technology — with Bitcoin being the best-known — have served investors more as a highly speculative asset. Since Bitcoin was introduced in 2008, accounts in this form of currency now account for more than 60 percent of the total of cryptocurrencies' market value, according to a study by the Cheung Kong Graduate School of Business, headquartered in Beijing.

Bitcoins cannot match the features of stablecoins, as the former are created by a process known as "mining", where transactions are verified and added to the public ledger, and their price fluctuates without being linked to any valuable assets.

But the recently announced Libra, the blockchain digital currency proposed by Facebook is much more like stablecoins as it is connected with a portfolio of underlying assets.

Jean-Michel Godeffroy, president at JMG Consulting and a former official with the European Central Bank, said central banks had not reacted so nervously to Bitcoin as they had to Libra, as it is much more likely that the latter could become a real currency.

Issues related to Libra mainly concern cross-border payments. However, this appears to have created a legally complex organizational and technical model under which Facebook and its associates receive customer funds, manage money and process transactions, experts said.

Godeffory said that to some extent, Libra may challenge monetary sovereignty — the power of a state to exercise exclusive control over its currency — especially for developed countries.

"But there is no doubt that digital currency is the currency of the future, and it should be managed under some regulatory frameworks," he added.

Liu, from the IMF, said: "Digital currencies still have a relatively small footprint and limited links to the rest of the financial system. Even so, authorities should remain vigilant. Digital currencies such as Libra have the potential to have a significant effect on the world financial system, particularly those that quickly reach a global scale."

Since stablecoins were first mooted, technology innovators and financial regulators have been asking if they can really remain stable.

It is a requirement that they be backed by a central bank and can be transferred at any time into a fiat currency to ensure that the issuance of digital money cannot fuel inflation.

Wang Yongli, former president of Bank of China, said on Saturday that to achieve stable prices, central banks should not follow Bitcoin in using "mining" to create new CBDCs.

Mu, the central bank official, said China's CBDC regulatory and policy frameworks are expected to remain "technology-neutral", and innovation is encouraged in different types of institutions. Technology and financial companies, as well as monetary sovereignty, are playing a role in the innovation of stablecoins.

Former PBOC governor Zhou Xiaochuan said on Saturday that financial regulation has to follow in the footsteps of global economic and financial innovation.

"Currently, the world is experiencing an unprecedented period of opportunity driven by technological development, which can rebuild global financial infrastructures and connections," he said.

According to a report by the G7 nations, as different countries may have various arrangements for stablecoins, this could raise crossborder transaction charges, including banking fees, foreign exchange and telecommunication costs.

Payment service providers may also struggle to operate among themselves due to a lack of standardization, implying a fragmentation of the international payments system, the report said.

Godeffory, from JMG Consulting, said that the issuance of stablecoins by central banks may also depend on users' requirements.

Persuading customers to switch from physical cash to digital currency may be another key problem."Thus, many central banks, especially those in Europe, will wait and see," he said.

"Thus, many central banks, especially those in Europe, will wait and see," he said.