In this March 19, 2019 photo, Hameed Rafi, brother of the late Rahila, shows his sister's watch, during an interview with the Associated Press at the Rahila library, in Kabul, Afghanistan. (RAHMAT GUL / AP)

KABUL, Afghanistan — A teary-eyed Hameed Rafi said he'll never forget the day he joined a panel of civilian war victims and family members and spoke about the suicide bombing in Kabul that killed his sister last August.

Afghanistan has experienced some 40 years of continuous wars and the center has divided them into periods, starting with the former communist regime from 1978-1992

Sharing his story with them in March at the Afghanistan Center for Memory and Dialogue, Rafi recalled how all of the wounded in the attack had been taken to hospitals, so he began searching lists of wounded hanging on hospital walls. But he couldn't find the name of his sister, 18-year-old Rahila, who had been studying in an education center for her college entrance exam when the attack happened.

Then, a doctor suggested Rafi also search lists of those killed.

"That shocked me, I had never considered that my sister wouldn't be alive anymore," he said. But as he learned later, Rahila had perished, he told those who attended the panel discussion.

Rafi's chance to share his story is at the heart of the memory center's mission. Launched in February by the Afghanistan Human Rights and Democracy Organization, it seeks to salvage, protect and share memories and stories of civilian victims of the country's four decades of war.

The center, located in a small basement of a rental house in west Kabul, contains exhibits reminding visitors of the years of carnage and loss, including drawings, garments, photos and toys with accompanying personal information such as names, places and causes of death or injury.

In this March 16, 2019 photo, Afghans look at the belongings of war victims stored in Memory center established by Afghanistan Human Rights and Democracy Organization, in Kabul, Afghanistan. (RAHMAT GUL / AP)

But the center is also a safe space for family and friends of civilian victims like Rafi to share their stories and preserve the memories of their loved ones. Each family has its own story, but when they listen to the narratives of others they realize they're not alone in their pain.

Afghanistan has experienced some 40 years of continuous wars and the center has divided them into periods, starting with the former communist regime from 1978-1992, which led to the 1979 invasion by the former Soviet Union to support the government and Afghanistan's subsequent spiral into war.

That period was followed by the civil war in the Islamic State of Afghanistan, from 1992-1996. During these years, many of the warlords, who were later returned to power by the international community in 2001, waged a brutal war against each other for power, killing 50,000 people in Kabul alone.

The Taliban regime, the Islamic Emirate of Afghanistan, ruled the country from 1996-2001. The years 2002-present represent the current period that followed the collapse of Taliban rule.

More than 2 million civilians are estimated to have been killed in the fighting in Afghanistan between 1978 and 2001, with thousands more killed and wounded in the past 17 years, since the US-led NATO intervention.

The center grew out of the concept of the "memory box," in which survivors or family members would bring favorite items of victims and put them in boxes of different sizes and materials, many of them ornately decorated. As they met other victims' family and friends, they began to exchange stories.

Later, the center asked survivors to write letters to their lost loved ones and to the larger Afghan community to let them know about their pain. This took place over about eight years, during which hundreds of memory boxes were constructed with more than 4,000 personal objects and stories.

Strolling through the memory center, visitors see in one exhibit a Barbie doll and accompanying make-up table that belonged to a young girl named Saima, who was killed in a suicide car bomb attack near the former parliament building in April 2015.

In another exhibit, a wristwatch still shows the time for visitors, but not its owner, who is unidentified. The watch belonged to the victim of suicide bombing attack in Kabul that killed and wounded dozens. Center organizers were unsure of the date of the attack. 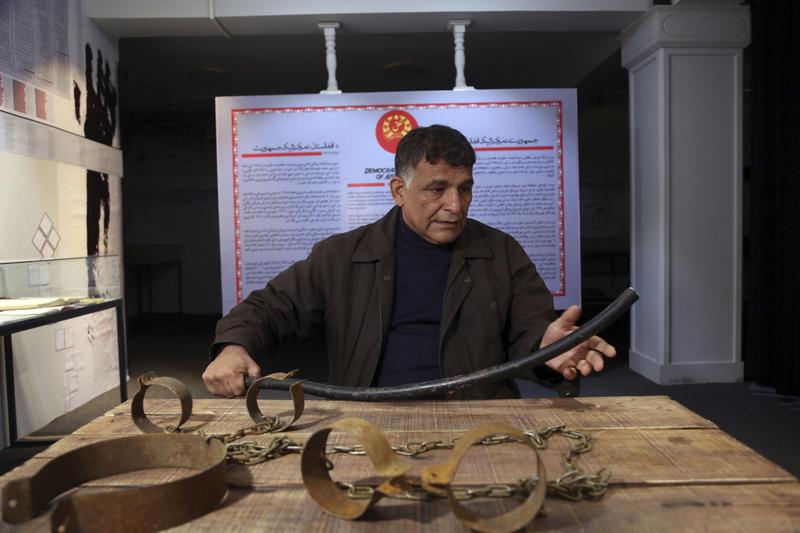 In this March 26, 2019 photo, Naik Mohammad Sharif, 58, a survivor and victim of war crimes, speaks during an interview with The Associated Press in the Afghanistan Center for Memory and Dialogue, in Kabul, Afghanistan. (RAHMAT GUL / AP)

In yet another exhibit, a small piece of paper has a handwritten note from a prisoner to his family, who has not seen or heard from him in decades. Family and friends still hope he will return home one day.

"Unfortunately, in Afghanistan there was not a policy of remembrance for thousands of war victims that we have in this country," said Hadi Marifat, the human rights organization's director.

The memory center is "a tribute to the war victims and it is for them (and survivors) to come here and share their stories and to, of course, at the same time get acknowledgement, which is very, very important in a context like Afghanistan," Marifat said.

Rafi, whose sister was one of 50 students killed in the Islamic State group's suicide attack on the Mawood Educational Center in western Kabul, understands the need to pay tribute to the lost.

Upon returning home a day after Rahila's burial, he went through her diary and discovered her love for books and education. In a short note, she writes that education is the only way out of the crisis in Afghanistan.

The note inspired Rafi to establish a library on Oct 25 in Dasht-e Barchi neighborhood in west Kabul, not far from where Rahila lost her life, to encourage a culture of reading and studying among youths. The Rahila Library has more than 7,000 books with a separate reading space for visitors. So far, more than 4,000 people have visited the library since it opened.

"We lost Rahila, but we hope Rahila's name and kindness will be remembered by people through this library," he said.