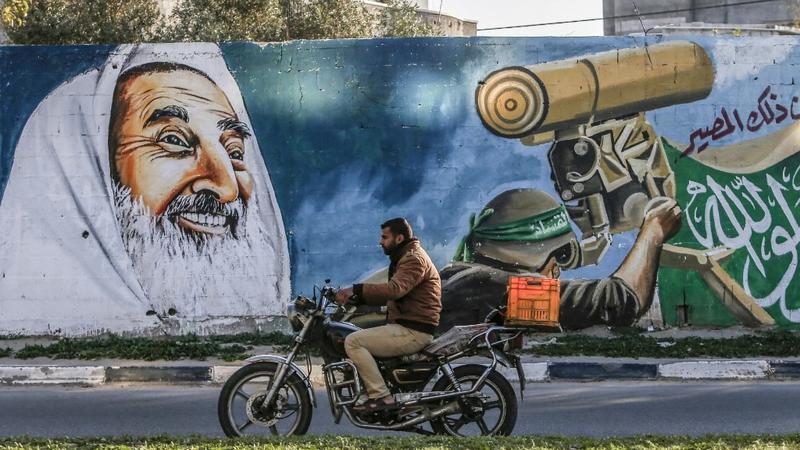 A Palestinian man drives a motorcycle past a mural depicting late Hamas spiritual leader Sheikh Ahmed Yassin and a masked fighter of the Qassam Brigades, the armed wing of the Hamas movement, manning a turret alongside a street in Rafah in the southern Gaza Strip on March 14, 2019. (SAID KHATIB / AFP)

GAZA - Islamic Hamas movement announced on Monday that it decided to intensify its electronic fund-raising of Bitcoin, calling on the world to support the movement and its armed wing al-Qassam Brigades.

Abu Obeida, spokesman of the al-Qassam Brigades, said his group plans to send hundreds of millions of messages to the cell phones of millions of Arabs, Muslims and "the people of the free world."

The messages will be in eight different languages, including Russian, Turkish, Indonesian and Malaysian, he added.

"These messages aim at facilitating the process of electronic fund-raising (Bitcoin) of the resistance group. We call on everyone to deal with these messages, share it and publish it everywhere," Obeida noted.

The Hamas armed wing launched a campaign on Jan. 29 to earn financial support for the first time through the currency of Bitcoin "to fight Israel's attempts to prevent all kinds of support for the movement."

ALSO READ: US fails to win enough support at UN to condemn Hamas

Hamas has been going through a financial crisis for several years which it blames on an almost 12-year Israeli blockade on the Gaza Strip.