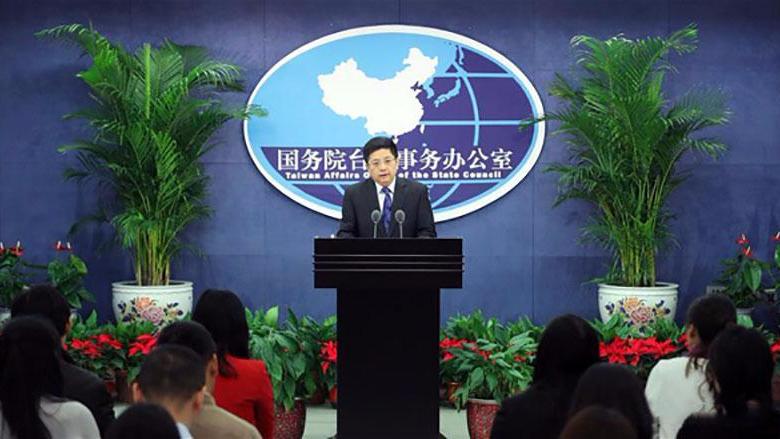 This Nov 30, 2016 photo shows Ma Xiaoguang, spokesperson for the Taiwan Affairs Office of the State Council, speaking at a regular press conference in Beijing, capital of China. (CAI YANG / XINHUA)

BEIJING – Adhering to the one-China principle is a norm of international relations and a universal consensus of the international community, as well as the political foundation of China-US relations, said a spokesperson Wednesday.

Isn't it embarrassing for the US officials to publicly adopt 'double standards' by accusing a sovereign state of establishing diplomatic relations with China?

Ma Xiaoguang, spokesperson for the State Council Taiwan Affairs Office, made the remarks when responding to a question about some US officials' comments after the Solomon Islands broke its so-called "diplomatic ties" with Taiwan authorities and established diplomatic relations with China.

"Isn't it embarrassing for the US officials to publicly adopt 'double standards' by accusing a sovereign state of establishing diplomatic relations with China?" Ma said.

Since 2016, Taiwan's Democratic Progressive Party (DPP) has refused to acknowledge the 1992 Consensus, pursued "Taiwan independence" activities, instigated hostility, caused confrontation and deteriorated relations across the Taiwan Strait, a fact that seems to have been ignored by some US people, Ma said.

He urged the United States to abide by the one-China principle and clauses and commitments laid out in the three China-US joint communiques, and properly handle Taiwan-related affairs to avoid severe harm to China-US relations and peace and stability across the Strait.

Taiwan's participation in activities of international organizations must be based on the one-China principle, said Ma.

He made the remarks in response to the DPP authority's claim that it failed to attend the International Civil Aviation Organization (ICAO) Assembly held in Canada due to "pressure" from the mainland and that Taiwan's aviation safety could be affected.

"Our position is consistent and clear that the issue about Taiwan's participation in activities of international organizations including the ICAO must be handled in accordance with the one-China principle," he said.

Ma stressed that the mainland has always paid attention to the demands of Taiwan compatriots in the civil aviation field.

Taiwan has open channels for access to standards, suggestions and relative materials from the ICAO and has flights to many cities in the world, he added.

"Facts have proven that Taiwan's aviation safety and its flights to and from other regions have no connection with whether the DPP authority participates in the ICAO assembly.”