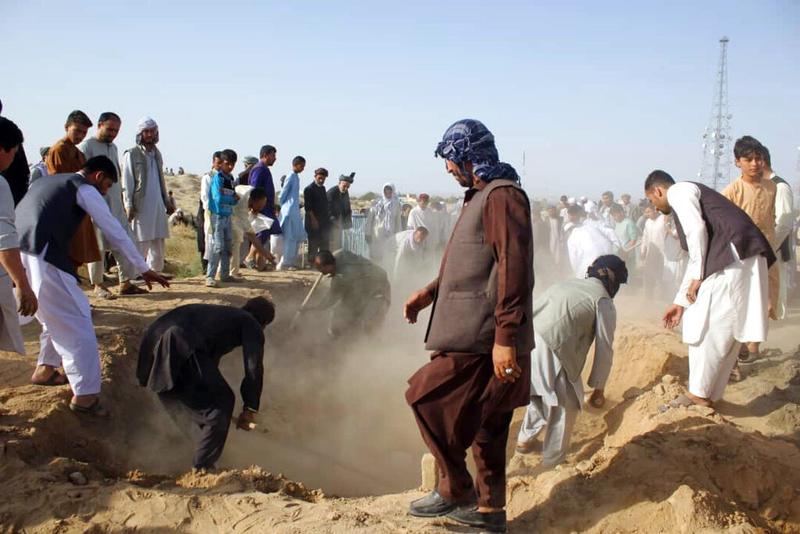 KABUL, Afghanistan — A US envoy has met with the Afghan president in the capital, Kabu, to brief him on the latest round of talks with the Taliban as a deal nears on ending America's longest war, an official said Monday.

President Ashraf Ghani's spokesman, Sediq Sediqqi, confirmed Sunday night's meeting at the presidential palace shortly after envoy Zalmay Khalilzad arrived from Qatar, where the ninth round of talks ended without a final agreement.

Khalilzad over the weekend said the US and the insurgent group are "at the threshold of an agreement" — even as the Taliban attacked the capitals of Kunduz and Baghlan provinces in the north.

"We are on the verge of ending the invasion and reaching a peaceful solution for Afghanistan," said the Taliban spokesman in Qatar, Suhail Shaheen.

The Taliban also blocked the two main highways heading north from Puli Khumri as gun battles continued, he said. The situation inside the city was calm but residents remained fearful of attack, he added.

At least 47 wounded people had been taken to hospitals since the attack began on Sunday morning, said Jawed Basharat, spokesman for the provincial police chief. He said around 50 Taliban had been killed by security forces. He confirmed there were casualties among security forces but could not say how many as sporadic fighting continued.

Separately on Sunday night, six pro-government soldiers were killed and three were wounded when Taliban fighters ambushed their patrol in Qarabagh district of eastern Ghazni province, said Arif Noori, spokesman for the governor.

The Taliban have stepped up attacks in recent months to strengthen their negotiating position while the United Nations and others say civilians have suffered , often caught in the cross-fire as government forces, backed by the US, have pursued the militants with airstrikes and raids. Afghanistan was the world's deadliest conflict in 2018.

A US-Taliban agreement on ending nearly 18 years of fighting is expected to be followed by intra-Afghan talks that include the Afghan government, which so far has been sidelined from the negotiations

ALSO READ: Taliban: US, Taliban deal will not stop attacks on Afghan forces

A US-Taliban agreement on ending nearly 18 years of fighting is expected to be followed by intra-Afghan talks that include the Afghan government, which so far has been sidelined from the negotiations. The Taliban have refused to talk with the Afghan government, calling it a US puppet, but have expressed openness to speaking with Afghan officials in their personal capacity.

The insurgent group is at its strongest since the US-led invasion to topple its government after the Sept. 11, 2001 attacks on the US The Taliban now control or hold sway over roughly half of Afghanistan.

The Taliban want all of the estimated 20,000 US and NATO forces to leave the country and already portray their departure as the insurgents' victory. For its part, the US seeks Taliban assurances that Afghanistan will not be a safe haven for extremist groups to plan and launch global terror attacks. A cease-fire also has been discussed.

READ MORE: US, Taliban close to deal as fighting intensifies

Few details have emerged from this latest round of US-Taliban peace talks, adding to the uncertainty as violence increases.

The agreement with the Taliban "will reduce violence and open the door for Afghans to sit together to negotiate an honorable & sustainable peace and a unified, sovereign Afghanistan that does not threaten the United States, its allies, or any other country," the Afghan-born Khalilzad said on Twitter before his Kabul arrival.

A US official with the negotiation team added that "any potential peace deal will not be based on blind trust, but will instead contain clear commitments that are subject to our monitoring and verification." The official spoke on condition of anonymity because they were not authorized to discuss the matter with the media.

The official added that "if and when we are able to announce an agreement, the process will pivot to intra-Afghan negotiations where the Taliban will sit with other Afghans and together they will commit to a permanent and comprehensive cease-fire."