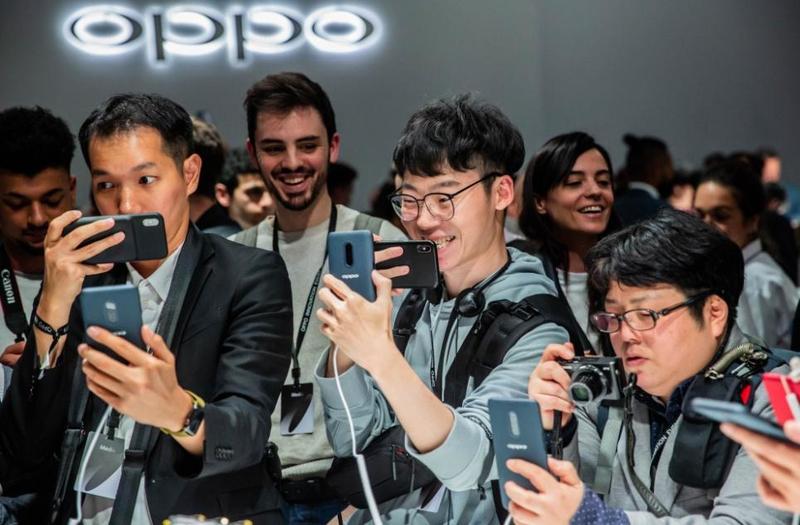 In this undated photo from February 2019, attendees at an Oppo launch event take photographs of an Oppo 5G smartphone model ahead of the Mobile World Congress Barcelona in Spain. (PHOTO / BLOOMBERG VIA CHINADAILY.COM.CN)

Chinese smartphone maker Oppo is making a strong push into overseas markets, after it strengthened its position as the second-largest player on its home turf.

The Guangdong-based company believes that its 10 years of experience in exploring foreign countries, and its growing pool of patents and international talent, will help it to go global in a better way.

Two days ahead of the Feb 25-28 Mobile World Congress Barcelona, the largest annual telecommunications gathering in Spain, Oppo unveiled its first 5G smartphone and announced that four foreign telecom carriers are to be among the first to sell the 5G model.

Four carriers－Swisscom, Australia's Telstra and Optus, and Singapore's SingTel －will sell the yet unnamed 5G Oppo phone first, which is scheduled to be launched in the second quarter of this year

Four carriers－Swisscom, Australia's Telstra and Optus, and Singapore's Singtel －will sell the as yet unnamed 5G Oppo phone first, which is scheduled to be launched in the second quarter of this year.

Shen Yiren, vice-president of Oppo, said the four overseas carriers are rolling out the 5G networks rapidly, so the company chose to first sell its 5G smartphones in Europe. Its partnership with Swisscom is the fastest.

The move marks the latest step by Oppo to build itself as an innovative brand in Europe, trying to lure consumers with cutting-edge products and design.

This is also proof of the company's determination to conquer more developed markets after its products became available in more than 40 countries and regions.

In June 2018, Oppo launched its high-end smartphone model Find X in Paris, marking its official foray into Europe. As of January, it had entered nine European markets, including Italy, Spain, and the United Kingdom.

Wu Qiang, who is in charge of Oppo's overseas business, said the company is not adopting an aggressive strategy in overseas markets. Instead, it strictly follows CEO Chen Mingyong's principle of "eating rice bite by bite".

"We will only enter the next market after doing a good job in existing markets," Wu said.

From September to December of 2018, smartphone shipments in China plunged almost 10 percent year-on-year, according to data from market research company International Data Corp or IDC.

Though Oppo outgrew the industry average to achieve an annual expansion rate of 1.5 percent in that time-frame, there is still a pressing need to look for new opportunities, Wu said.

"About 100 million units of handsets are sold in Europe every year. We must build a presence there."

Other Chinese smartphone makers, including Huawei, Xiaomi and Vivo, are also looking beyond their home turf for growth. In this context, Oppo believes it has an edge over others as it first started its international journey as early as in 2009 in Thailand, much before others jumped on the going-global bandwagon.

In the fourth quarter of 2018, Oppo outcompeted Samsung to become the largest smartphone vendor in Thailand with a market share of 22.2 percent, growing about 70 percent year-on-year, according to the market research company Canalys.

Its products and services are also well received in other South Asian and Southeast Asian countries, including India, and African countries such as Kenya.

In 2018, Oppo shipped 113 million units of smartphones worldwide, garnering a global market share of more than 8 percent, according to IDC data

In 2018, Oppo shipped 113 million units of smartphones worldwide, garnering a global market share of more than 8 percent, according to IDC data.

But Wu admitted that it is not easy to crack open the hard nut of European smartphone market where most handsets are sold in large retail chains and by local telecom operators.

Although Oppo is a well-known brand among European telecom industry professionals, awareness about it among the consumers is not high.

"It takes time to build a brand, with careful consideration needed to decide what forms of marketing and product communications are appropriate. We are working hard to know the specific characteristics of each market," Wu said.

Xiang Ligang, director-general of the Information Consumption Alliance, said if Chinese smartphone makers want to truly grow into global brands, they cannot just stay in China or Southeast Asia or Africa. They need to establish a presence in more advanced markets such as Japan, Europe and the United States.

"They had made significant technological advancements as well as product designs in recent years. They are now in a relatively good position to venture out into the advanced battlefields," Xiang said.

Even as Oppo steps up expansion in Europe, it has filed over 33,000 patent applications worldwide as of January.

It has also inked a multi-year global patent license agreement with Swedish telecom equipment giant Ericsson. Under the deal, the two sides will also collaborate on a number of business projects.

The deal is the latest in a series of patent license agreements with key industry partners such as Qualcomm, Dolby and Nokia. This strategy is expected to clear the patent obstacles for Oppo to better serve global consumers in the 5G era, said Fu Liang, an independent telecom analyst.

"Talent is what we are in dire need of, to explore overseas market," Wu said.

Oppo aims to have 90 percent of its Europe-based staff sourced from the local talent pool, so as to better tap into the design and art scholars from local universities.

The company said it currently has over 40,000 employees globally, with 10 manufacturing facilities and six research institutes across the world.

Its mobile operating system ColorOS commands 250 million users worldwide. To expand its reach, Oppo has also set up over 400,000 points of sale worldwide.