Performed on a bare stage with no props, Theatre de la Feuille’s retelling of a classic Chinese story in L’Orphelin 2.0 is an open-ended play that stimulates the mind, writes William Chang. 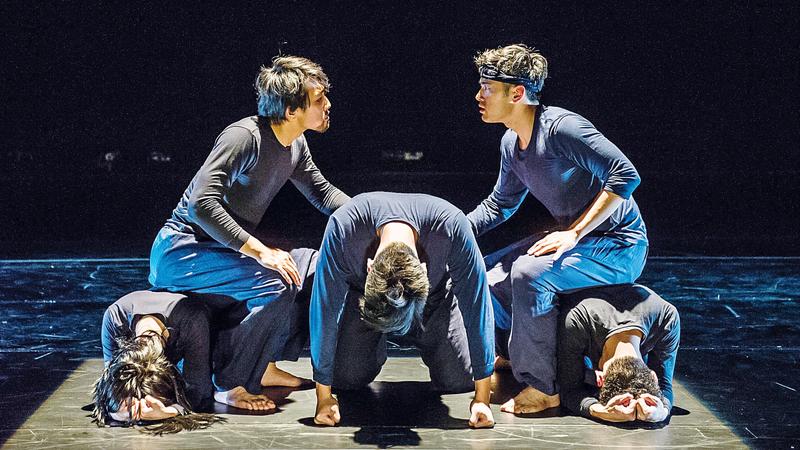 Performed in a black box theater with no props or a set, with only drums by way of musical accompaniment and minimalist costumes, Theatre de la Feuille’s L’Orphelin 2.0 is as bare-bones as it could possibly be. The play relies heavily on physical movement and elements of pantomime inspired by French performer Jacques Lecoq, in which actors use action and body movements to convey the story.

L’Orphelin 2.0 is inspired by The Orphan of Zhao, a play by the 13th-century dramatist Ji Junxiang and the first Chinese play to be translated into an European language (a French translation by Joseph Henri Marie de Premare was published in 1731). It recounts the story of the Zhao family and how its members go to extreme lengths, trying to protect the youngest child of the clan, Zhao Shuo, after their rival, Tu’an Gu, orchestrates the slaughtering of the entire family.

Theatre de la Feuille first staged the play in 2010. Soon after completing the run, director Ata Wong Chun-tat discovered that there were many versions of the story. That’s what prompted him to create L’Orphelin 2.0. “I think it’s good to be able to tell different versions of this story (to our audiences),” he says.

The piece itself is abstract, with actors performing mind-boggling physical feats. In one scene, an actor carries a fellow actress on his shoulders with her shirt covering his face to symbolize a pregnant woman and the child in her womb. These transformations, while curiously mesmerizing, sometimes border on comedic as the four-person cast frequently switch roles — a grown adult in one scene, and suddenly a crying baby in the next — all while maintaining a dramatic gravitas. The play is highly physically demanding, producer Lei Yuen-hung notes. “There are some actions that are dangerous… and there are a lot of tasks that require the actors to have good physical fitness.” 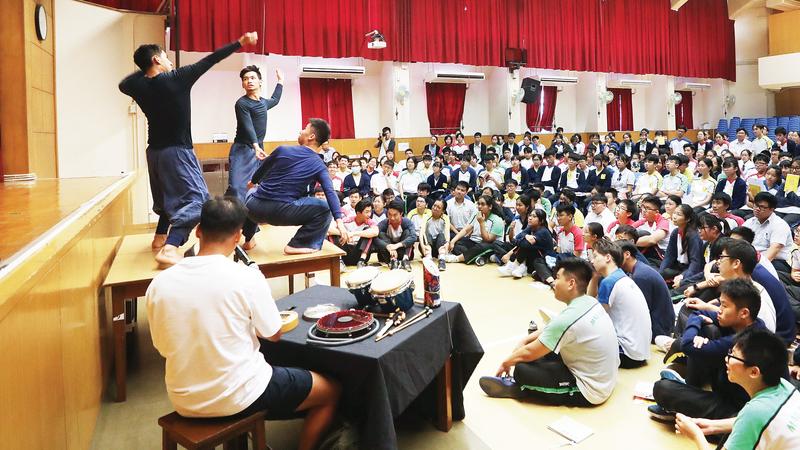 L’Orphelin 2.0 was staged as part of the Jockey Club New Arts Power festival around the end of 2019. The production has also been touring Hong Kong schools as part of the festival’s School and Outreach Programme.

At Buddhist Mau Fung Memorial College, for example, L’Orphelin 2.0 was met with nothing but warm praise. The pre-show consisted of games, such as charades, which brought delighted uproars from the crowd whenever a student was brought on stage as a participant. Throughout the play, students remained fascinated by the subjects of the performance, gasping in awe each time an actor executed something physically strenuous. As the play appeared to end, a shocking twist was revealed when one of the characters confessed that the story just told was not the real one. The others made many attempts to silence him, ultimately dragging him away and throwing him out the stage door.

After the actors took their final bows, Wong came on stage and asked the audience which version they thought was the real one. Many students believed it to be the last one, with one of them explaining that he thought so as the character trying to reveal the truth was shown as being suppressed.

“Different schools react differently to the play. Some are more serious and others are more enthusiastic,” says Lei, the play’s producer. “We thought it might be difficult for young students to understand a very physical performance. To our surprise, most of the students, both primary and secondary, were able to comprehend the messages behind the play.”

Theatre de la Feuille just concluded a run of another of their projects,  titled The Happy Poor Guys. The interactive mobile theater piece dramatizes the story of the Hong Kong flea market Tai Tat Tei. People with memories of the market during its heyday in the 1960s and ’70s took audiences on a nostalgia trip through vivid storytelling, aided by performances by the actors.

Displaying an impressive flexibility with the theater medium, Theatre de la Feuille continues to keep their audiences immersed in their shows, no matter how experimental their productions get.