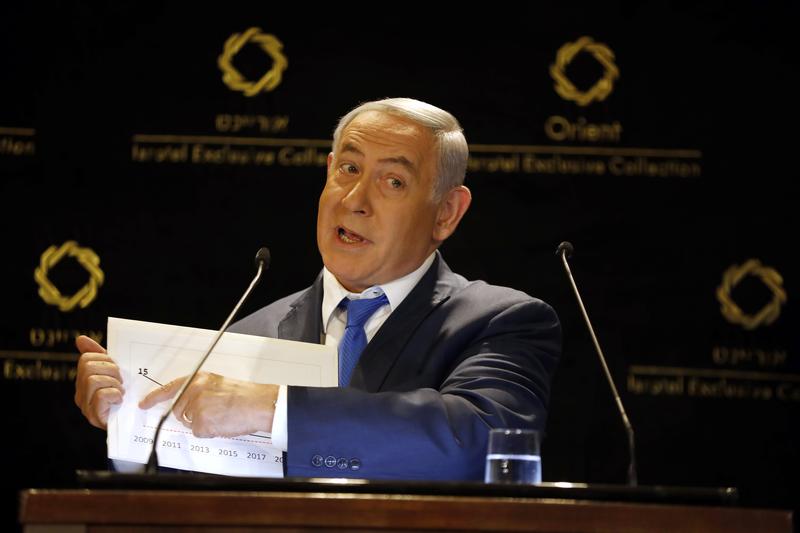 In this May 30, 2019 file photo, Israeli Prime Minister Benjamin Netanyahu gives a statement to the press in Jerusalem. (ARIEL SCHALIT / AP)

JERUSALEM — After narrowly failing to oust Prime Minister Benjamin Netanyahu in April elections, the long-time Israeli leader's opponents now have a rare chance for a "do-over" in a snap vote in September.

The 69-year-old Netanyahu's apparent victory against long odds seemed to seal his aura of invincibility in the eyes of many Israelis, with some resigning themselves to living under many more years of his rule. But various political machinations in Israel's unwieldy parliamentary system have created an unprecedented repeat election and another chance for Netanyahu's rivals to finally topple him after a decade in power.

Netanyahu, who has been prematurely eulogized countless times over the years, still has many things playing in his favor. In April, tens of thousands of favorable votes were lost when they were cast for smaller allied parties that did not win enough support to enter parliament. That's unlikely to happen again, as efforts are being made to unite the various factions.

Netanyahu also got a boost by folding the economics-focused Kulanu party of Finance Minister Moshe Kahlon into his ruling Likud party. With tensions building with Syria on the northern front, a potential conflict could also lift his standing among voters who see him as Mr Security. And, of course, his close friend US President Donald Trump, who has made it clear whom he prefers, could always lend a helping hand.

"Bibi got elected. Now, all of a sudden, they're going to have to go through the process again until September? That's ridiculous," Trump said Sunday in Washington, referring to Netanyahu by his nickname. "Israel is all messed up with their election."

Initial polls have put Netanyahu ahead once again, with the best chance of forming another coalition government. But several factors could deliver a different result in the fall.

After 13 years overall in power, Netanyahu has accumulated his fair share of haters, even among those in his ideological camp.

His dramatic failure to secure a parliamentary majority was the result of a traditional ally, Avigdor Lieberman, refusing to bring his Yisrael Beiteinu faction into the coalition.

The reason was ostensibly over Lieberman's insistence that legislation be passed mandating young ultra-Orthodox men be drafted into the military, like most other Jewish males.

But there was already bad blood between the two. In the wake of the crisis, Netanyahu excoriated Lieberman, accusing him of betraying his voters, abandoning his right-wing ideology and selfishly carrying out a personal vendetta against him. Lieberman in turn criticized the "cult of personality" around Netanyahu and questioned the mental health of his family. Polls still show Netanyahu reliant on Lieberman for a parliamentary majority, but it's very hard seeing them ever working together again.

Netanyahu burned more bridges Sunday by abruptly firing a pair of powerful hawkish Cabinet ministers, Naftali Bennett and Ayelet Shaked, in a humiliating fashion. The two, who failed to be re-elected in April, are planning on running again and hold a long grudge against Netanyahu and his wife.

The prime minister still seems to enjoy strong support within his own Likud party. But that could fade if he starts being blamed for the current impasse. The most likely candidate to challenge him from within appears to be former Cabinet minister Gideon Saar.

Angered by the passage of a controversial law that defined Israel as the nation-state of the Jewish people, and Netanyahu campaign tactics they consider racist, many of Israel's Arab minority sat out the April elections. The low turnout, as well as divisions between small Arab parties, contributed to a poor showing in the election.

Arabs make up about 20 percent of Israel's 9 million citizens, but have historically had a lower turnout than Jews.

With a rare opportunity to fix their mistakes, Arab leaders are now talking about unifying their parties and pressing their constituents to vote in higher numbers.

Netanyahu's right-wing base considers the Arab minority disloyal, and the prime minister has played on those fears before. In 2015, he famously tried to mobilize supporters by warning that Arab voters were heading "in droves" to the polls.

The parliamentary arithmetic could change dramatically if they actually do this time.

Netanyahu's legal woes were well known before the April vote and didn't appear to influence his popularity, but he is far more vulnerable now.

Before the April election, Netanyahu vowed not to seek formal protection from prosecution. But assuming he had won, Netanyahu's allies then quickly began drafting a contentious bill aimed at granting him immunity and were looking to push legislation limiting the power of Israel's Supreme Court.

Now that his hand has been revealed, and he seems mostly invested in his own survival, some of his more moderate supporters may be scared off.

Together with a general repulsion over what is generally seen as an unnecessary election, and the meddling of his wife and son in state affairs, the elusive "Bibi fatigue" that opponents have waited for could perhaps start settling in.

Even if Netanyahu wins the election, it is unlikely he will be able to form a government and lock down the required political support for an immunity deal before an expected indictment. That would force him to stand trial, and in turn put heavy pressure on him to step aside.

Netanyahu got the nod to form a coalition because he had more supporters in parliament. But with a few more months of experience under his belt, Gantz presents the most formidable opponent of Netanyahu's career. The tall, telegenic ex-general looks the part of an Israeli prime minister and flaunts a strong, diverse list of candidates behind him.

On the political left, the small Labor and Meretz parties are looking to unite and could give Gantz a parliamentary boost, while those tired of Netanyahu could also find themselves drawn to Gantz's military aura.

"We have a second chance. It doesn't happen often in life. A second chance to form a national unity government led by Benny Gantz," his deputy, Yair Lapid, said Monday. "We have to win these elections. If we don't then we won't have a democracy. The fate of our children depends on it."