Half of China babies born to second time parents Jan-Aug 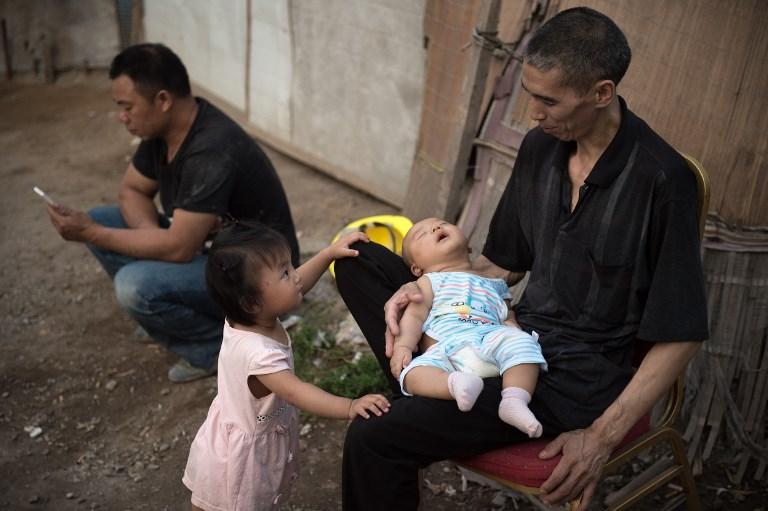 In this picture taken on June 20, 2017, a man (right) holds a baby in front of his daughter on a street in a migrant village on the outskirts of Beijing. (NICOLAS ASFOURI / AFP)

BEIJING - In the first eight months of 2017, more than half of China's newborn babies were the second child in the family, according to a health official.

From January to August this year, about 52 percent of the 11.6 million babies born have an older sibling, said Wang Peian, deputy head of the National Health and Family Planning Commission (NHFPC), in a demography forum Monday in Beijing.

About 52% of the 11.6 million babies born Jan-Aug have an older sibling, the deputy head of the National Health and Family Planning Commission said

Figures provided by the NHFPC showed that 18.5 million babies were born in hospital in 2016, the highest since 2000 and 1.3 million more than 2015, and about 45 percent of them had an older sibling.
READ MORE: Online companies entice staff with child care cover

In response to an aging population, since 2016 couples have been allowed to have two children, bringing to an end the one-child policy after almost 40 years. Wang also said that even with an increased average age of expectant mothers, newborn and maternal mortality have fallen.

There will be changes to policies in tax, social security, housing, employment and others, and more support for the second child policy, said Wang. In 2016, China allocated a total of 2.9 billion yuan (about US$440 million) for construction of maternity and pediatric hospitals at city and prefecture level.

By 2020, there will be around 89,000 new maternity beds in hospitals and 140,000 more obstetricians and midwives. More emergency centers for mother and child treatment will be set up across the country by the end of the year.
ALSO READ: Second-child policy will restore social balance