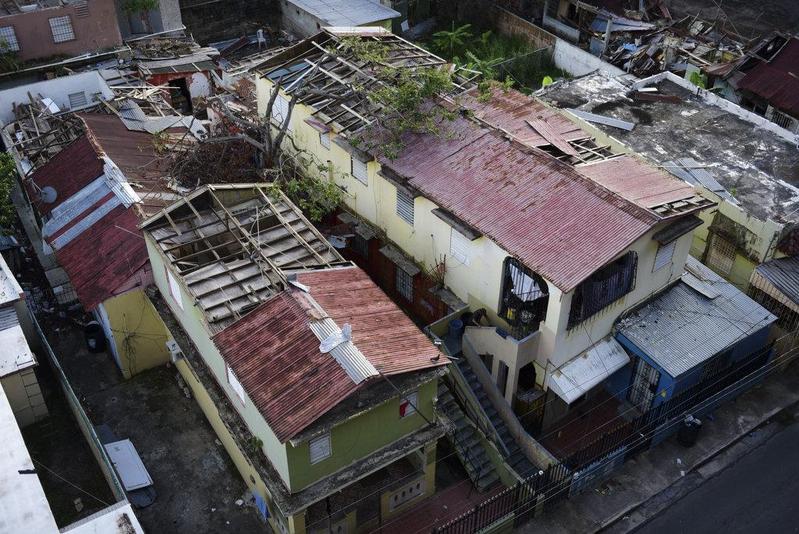 In this Nov 15, 2017 photo, some roofs damaged by the whip of Hurricane Maria are shown still exposed to rainy weather conditions, in San Juan, Puerto Rico. (CARLOS GIUSTI / AP)

SAN JUAN, PUERTO RICO - Thousands of police officers are calling in sick every day in Puerto Rico, partly to press demands for unpaid overtime pay for hurricane recovery efforts as concerns grow over people's safety in a US territory struggling to restore power.

"We have had an inordinate amount of absences that we haven't seen in years prior," she told The Associated Press, adding that while there has been a drop in major crimes this year, she is concerned that trend could reverse.

However, the administration of Gov. Ricardo Rossello on Wednesday rejected the idea of using the National Guard.

Normally, an average of 550 police officers are absent every day across Puerto Rico, which has one of the largest police departments under US jurisdiction with more than 13,000 officers overall. But recently, more than 2,700 officers on average have been absent daily.

Recently, more than 2,700 officers on average have been absent daily across Puerto Rico

Public Affairs Secretary Ramon Rosario said the government has already made nearly US$15 million in overtime payments since Hurricane Maria hit more than three months ago and US$6.4 million more will be distributed Saturday.

Hernandez estimated the government owes officers an additional US$35 million in overtime pay, but said the department is still tallying attendance sheets to determine the exact amount.

Authorities said part of the problem is that Puerto Rico's government has to wait for the US Federal Emergency Management Agency to reimburse it for overtime police pay and that it is a slow process.

The police chief said officers also are upset about other changes amid Puerto Rico's economic crisis, including smaller pensions and an end of payments for unused sick days. "They feel in a way cheated in the past 15 years in terms of benefits," Hernandez said.

The island is struggling to recover from the Category 4 storm that hit amid an 11-year-old recession, killing dozens of people and causing up to an estimated US$95 billion in damage.

Police officers worked seven days a week for 12 to 15 hours a day in September and October, said lobbying groups for the island's police officers, who are not allowed to unionize.

"The question is quite clear: Do they have the money to pay police officers?" said Carlos Morales, president of an association that represents more than 8,000 officers. "That's the biggest battle we face to help solve the problem."

He said in a phone interview said it is unfair to keep asking officers to work without paying them what is owed.

"Police officers can't take it anymore," Morales said. "They have their problems. They've lost their homes. They've lost a lot of things, and on top of it, they have to keep working."

As the number of absences grows, so do concerns about keeping people safe on an island where many communities remain without power because of hurricane damage.

"I don't want to wait until this gets out of control," Puerto Rico Sen. Axel Roque said in a statement Wednesday.

He said that one precinct had only three police officers to cover four towns on Christmas Eve and that another precinct recently had to ask a nearby one for more officers to help cover all shifts that day.

"Citizens are paying taxes and expect that the government fulfill its obligations to guarantee their security," he said.

Public Safety Secretary Hector Pesquera, whose department includes the police force and other emergency services, was not available Wednesday to discuss police absences, his office said.

In the mountain town of Morovis, where the majority of its 30,000 people don't have power, 13 of the town's 21 patrol officers recently called in sick, Sgt. Felix Rosario told AP. As a result, he said cases are piling up.

"We're facing limitations," he said, adding that the number of thefts, especially those involving generators, has increased since the hurricane.