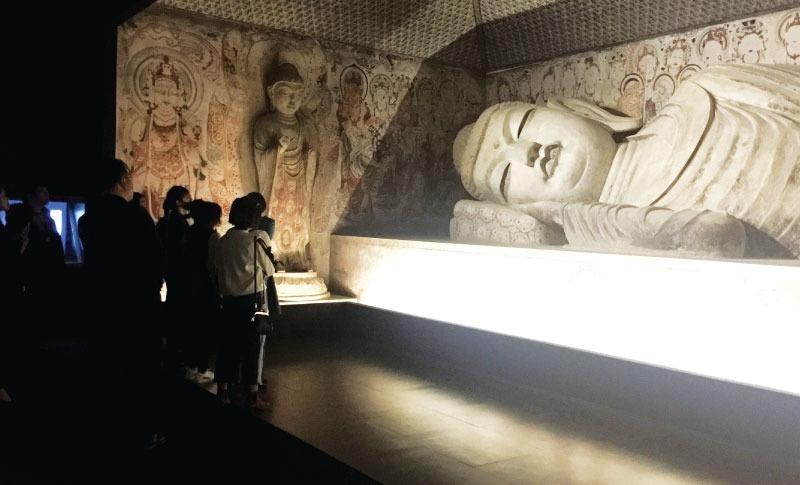 It is not possible for everyone to visit the Mogao Grottoes, home to the world’s largest collection of Buddhist artworks, in person.

But at a large-scale show in Shenzhen, South China’s Guangdong province, which features reconstructions of individual caves found at the heritage site, visitors can now appreciate the art in detail through an immersive experience that uses cutting-edge technology.

Launched at the end of December, Mysterious Dunhuang runs until March 30 and displays seven replica caves identical in size and appearance to the original caves in Dunhuang in Northwest China’s Gansu province.

More than 100 murals created by generations of artists copying the cave murals are on display. Most of the original murals have never been seen by visitors to Dunhuang as they have been kept in storage to preserve them.

The entire ceiling of the exhibition space, about the size of 10 basketball courts, has been transformed into an arch-like screen, with films projected onto them, telling stories from the murals in the caves.

Animated images of dancing and flying apsaras (supernatural entities in Hindu and Buddhist mythology) and videos introducing the Mogao murals are shown on separate stages. Audiences can relax on banks of cushions to observe the sky-like screen.

“It’s very rare for us to hold an exhibition of this scale out of the 100 or more shows we’ve held around the world,” said Song Shuxia, deputy director of the visitor reception department at the Dunhuang Research Academy. She brought a team of professional guides working at the caves to the show, offering English and Japanese guide services to visitors.

The academy held exhibitions in the United States and Britain last year and will present a show in Italy during January.

Song said the Dunhuang Research Academy’s first step is to protect vulnerable murals and research their origins, which span more than 1,000 years of Chinese art history, and involve the unbroken development of China’s folk culture, music and society. 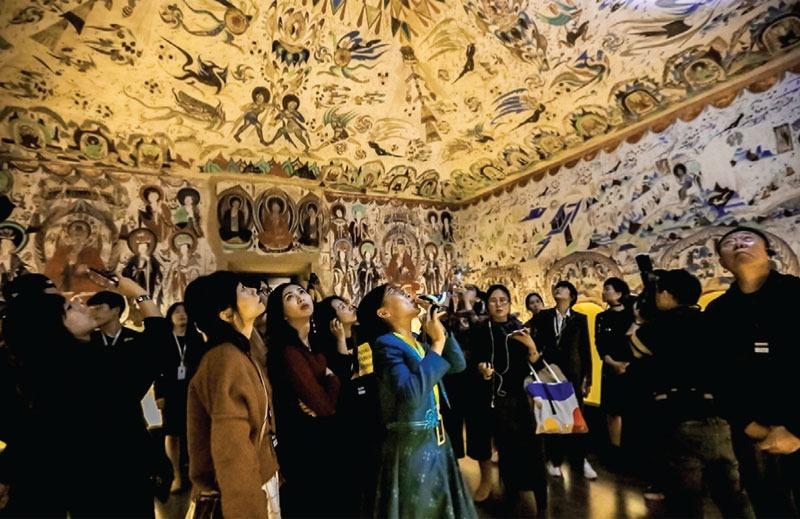 The next step is to spread knowledge about the art and culture of the caves by holding shows worldwide, said Song. She has worked at the academy for 20 years.

The Mogao Grottoes is China’s first UNESCO World Heritage Site. It hosts 735 caves containing 45,000 square meters of murals. It has been referred to as an “unmovable museum on walls”.

To protect the site and make exhibitions in other cities possible, artists have been copying the cave murals since the 1950s. To date, they have finished just 12 caves. All the colors, lines and patterns found in the murals have been faithfully re-created, including details such as colors that have faded or changed due to oxidation.

In some instances, it took an artist eight to 10 years to finish replicating paintings on a single wall because of the difficulties, such as dim light in the caves or the limited amount of time they were allowed to stay inside the cave for preservation purposes.

The seven copied caves on display allow audiences to take a close look at the murals and Buddhist sculptures, shoot photos and remain inside as long as they want - something not permitted at the original site.

Highlights of the exhibition include a 13-meter-long reclining Buddha from the Tang Dynasty (AD 618-907). Like other Buddhist sculptures on show, it was modeled and then painted by the artists.

The head of the Buddha weighs around 1 metric ton and needed 25 people to move it, said Dai An, art director at Blooming Investment, a local company that focuses on art and culture projects and the organizer behind the exhibition. It took more than one month to curate the show, said Dai. 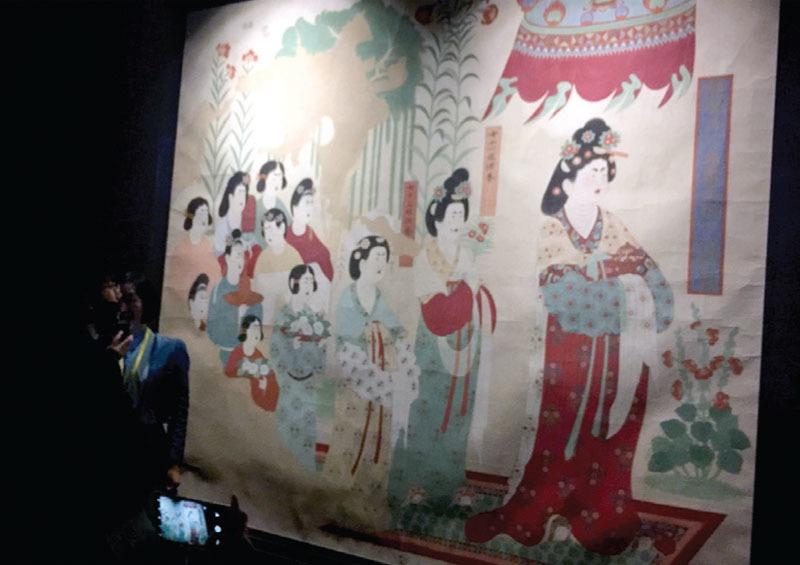 Yang Juze, founder of Blooming Investment, said his mission for the show was to share Dunhuang’s culture with as wide an audience as possible, especially younger people. This was the reason for introducing so many high-tech features in the exhibition, to make it more appealing to younger visitors.

“We all know that the Mogao Grottoes are gorgeous. But how we attract ordinary people with little knowledge of art or Buddhism has been the big question. I hope I have presented the show in a way that will allow more people to understand this culture,” said Yang.

He took some interesting Buddhist stories depicted in the murals and turned them into animations, such as one tale of a prince who sacrifices himself as food for hungry tigers.

Yang also worked with Chinese tech giant Tencent to produce a series of emojis based on the images of flying apsaras for the popular instant-messaging platform QQ. They also created online clothes and accessories from the murals for people to use on their avatars.

Yang admitted there have been disagreements with the Dunhuang Research Academy on how best to present the show. But the common aim of reaching more people remained the overriding mission of the exhibition.

“The caves are a great treasure in our culture. But we should change our traditional methods of communication, especially toward the young. I think using new technology or even featuring elements from the caves in the future games might be a better way to introduce culture to younger people,” Yang said.

“Speaking of Shenzhen, people usually associate the city with technology, but never with culture. I want to be a pioneer to satisfy people’s spiritual needs,” he said.