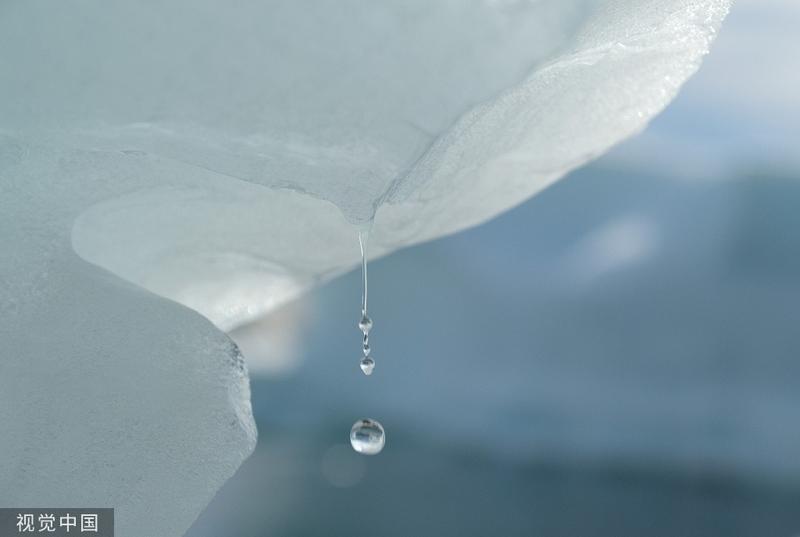 Water drips from ice in the Ilulissat Icefjord during unseasonably warm weather near Ilulissat, Greenland, on July 30, 2019. (PHOTO / VCG)

LONDON/GENEVA - Britain has officially had its hottest day on record.

The temperature was recorded Thursday and confirmed Monday after "quality control and analysis" by the Met Office.

Temperature records fell across Europe last week as a suffocating heat wave swept up from the Sahara.

The United Nations warned on Friday that the hot air that smashed European weather records last week looks set to move towards Greenland and could cause record melting of the world's second largest ice sheet. 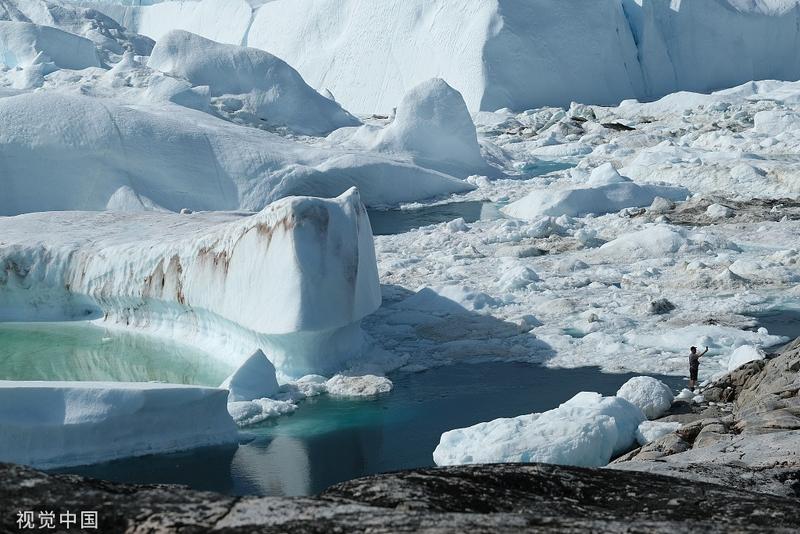 A visitor snaps a selfie while standing near free-floating ice near the Ilulissat Icefjord during unseasonably warm weather near Ilulissat, Greenland, on July 30, 2019. (PHOTO / VCG)

Clare Nullis, spokeswoman for the UN World Meteorological Organization, said the hot air moving up from North Africa had not merely broken European temperature records on Thursday but surpassed them by 2, 3 or 4 degrees Celsius, which she described as "absolutely incredible".

"According to forecasts, and this is of concern, the atmospheric flow is now going to transport that heat towards Greenland," she told a regular UN briefing in Geneva.

"This will result in high temperatures and consequently enhanced melting of the Greenland ice sheet," she said. "We don't know yet whether it will beat the 2012 level, but it's close." 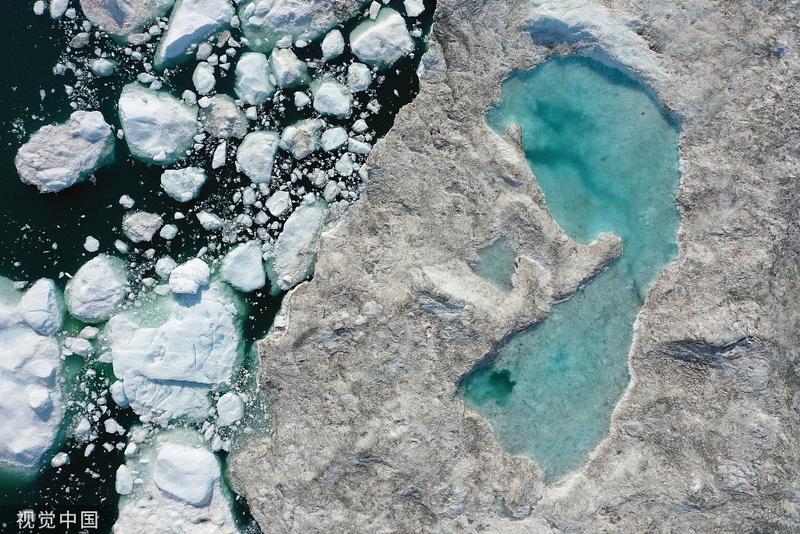 In this aerial view, melting ice forms a lake on free-floating ice near the Ilulissat Icefjord during unseasonably warm weather near Ilulissat, Greenland, on July 30, 2019. (PHOTO / VCG)

Nullis cited data from Denmark's Polar Portal, which measures the daily gains and losses in surface mass of the Greenland Ice Sheet.

"In July alone, it lost 160 billion tonnes of ice through surface melting. That's roughly the equivalent of 64 million Olympic-sized swimming pools. Just in July. Just surface melt - it's not including ocean melt as well."

The Greenland Ice Sheet covers 80 percent of the island and has developed over many thousands of years, with layers of snow compressed into ice. 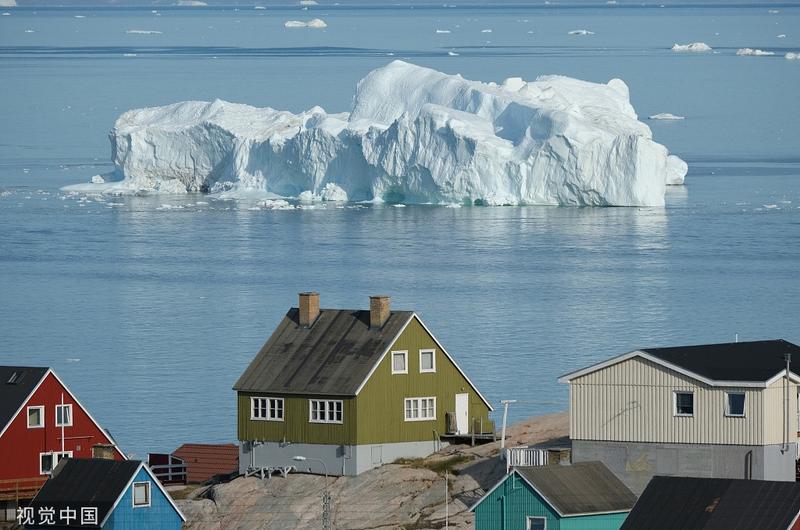 An iceberg floats in Disko Bay behind houses during unseasonably warm weather in Ilulissat, Greenland, on July 30, 2019. (PHOTO / VCG)

The dome of ice rises to a height of 3,000 meters and the total volume of the ice sheet is approximately 2,900,000 cubic kilometres, which would raise global sea levels by 7 meters if it melted entirely, according to the Polar Portal website.

Greenland had not had exceptional weather this year until June, but its ice had been melting rapidly in recent weeks, she said.

The warmer air also had implications for Arctic ice extent, which was nearly the lowest on record as of July 15, Nullis said.

She said increasingly frequent and intense heatwaves were linked to man-made climate change.

"What we saw with this one was that temperature records weren't just broken, they were smashed."

She cited a study by the Britain's Met Office which found that by 2050, record-breaking heatwaves would happen every other year. 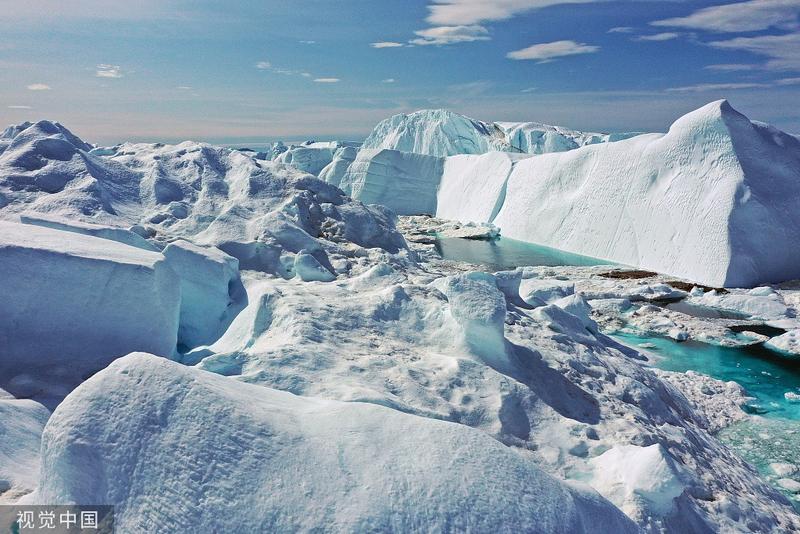 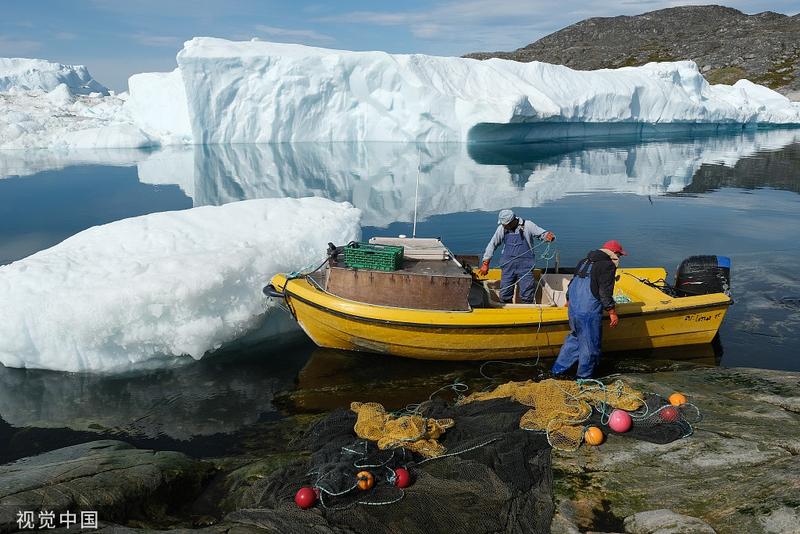 Inuit fishermen prepare a net as free-floating ice floats on still water (background) at the mouth of the Ilulissat Icefjord during unseasonably warm weather near Ilulissat, Greenland, on July 30, 2019. (PHOTO / VCG)