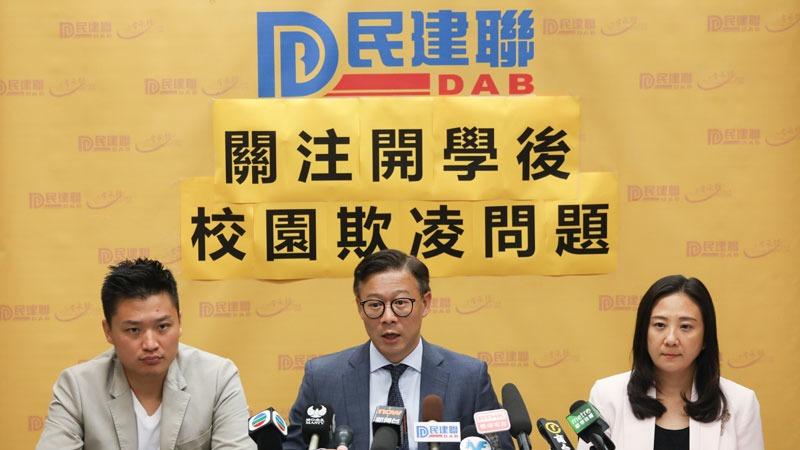 (From left)  Members of Democratic Alliance for the Betterment and Progress of Hong Kong, Vincent Cheng, Horace Cheung and Elizabeth Quat hold a press conference on school bullying at the Legislative Council building on Aug 20, 2019. (CALVIN NG / CHINA DAILY)

Cross-sector civic leaders in Hong Kong launched a concern group on Wednesday, aiming to keep “bullying, hatred and discrimination” off the city’s campuses.

As a new school year approaches, the School Bullying Concern Group was formed to address growing concerns among Hong Kong parents that their children might be subject to school bullying for having different political views from their classmates or teachers.

Since June, the personal information of more than 1,200 police officers and family members — including names, home addresses and appearances — have been leaked and circulated on the internet or posted in public places, according to Hong Kong police. The children of police officers have subsequently become targets of school bullying.

Some educators also became bullies. In one of the most notorious cases, Alvin Tai Kin-fai, an assistant principal of the Hong Kong Chinese Christian Churches Union Logos Academy, openly made derogatory comments about Hong Kong police officers. He claimed officers had used excessive force in handling recent protests. Tai said on social media he gave his “blessing” for officers’ children to “die before they were 7 years old”, and that he also hopes these children would “die an unnatural death”.

One of the conveners, Horace Cheung Kwok-kwan, said at a press conference on Wednesday the schoolchildren of police officers are among the most vulnerable in society and must be protected. The vice-chairman of the Democratic Alliance for the Betterment and Progress of Hong Kong said he had recently received reports of intimidating messages targeting these children.

Chan, also co-president at Federation of Hong Kong Guangdong Community Organisations, said the group has launched a website to help bullied students and their parents. The group will follow up reports of bullying with the Education Bureau and the schools involved. It will also work with social organizations providing mental health services to bullied students.

The group will also solicit public opinions and submit policy suggestions to the government over the issue, it said in a release. In doing so, the group aims to help students concentrate on their studies in a safe and friendly environment.

Students from the Chinese mainland are under great pressure, said Yeung Yiu-chung, president of the Hong Kong Federation of Education Workers. Many of them are children of mainland people working in Hong Kong, and are often attacked for speaking only Mandarin or poor Cantonese.

These attitudes are harmful to a city that wants to attract more talents, Yeung added.

One in three schoolchildren aged 12 to 18 in Hong Kong has been bullied during a six-month period, according to a 2018 survey by the Agent of Change Foundation.

According to a 2017 survey by the Organization for Economic Cooperation and Development, Hong Kong rated first in terms of the percentage of students who reported being bullied at least a few times a month. The survey covered 540,000 students from 72 countries and regions.