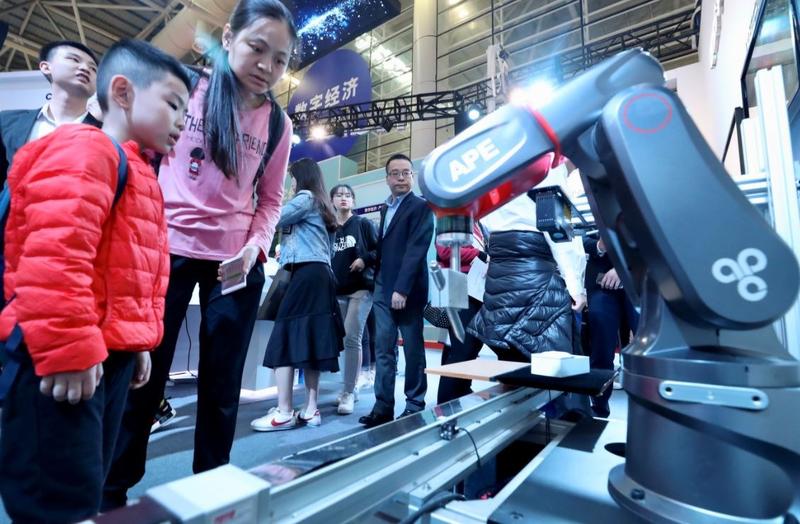 China is stepping up its efforts to develop the industrial internet to foster new growth drivers and promote high-quality economic development, officials from the Ministry of Industry and Information Technology said on Tuesday.

"The industrial internet, which serves as a key growth engine for the digital economy, will help give new impetus to industrial transformation and upgrading, foster smart industrial economy and further integrate the new generation of information technology with real economy," said Wang Xinzhe, chief economist with the ministry.

The industrial internet, which serves as a key growth engine for the digital economy, will help give new impetus to industrial transformation and upgrading, foster smart industrial economy and further integrate the new generation of information technology with real economy

The industrial internet, a new type of manufacturing automation that combines advanced machines, internet-connected sensors and big data analysis, is expected to boost productivity and reduce costs in industrial production.

"We will make a big push to develop the industrial internet," Wang said. "More efforts are needed to promote the exploration and use of data resources, cultivate multilevel industrial talents, explore solutions to boost the industry's innovative development and achieve international cooperation."

Wang made the remarks at a sub-forum during the ongoing second Digital China Summit in Fuzhou, Fujian province. The event opened on Monday and continues through Wednesday.

Li Ying, an official with the information technology and software division at the ministry, said as China's growing digital economy is expanding into industrial areas, industrial data has become a key asset in the digital economy.

In 2018, the value of digital industrialization amounted to 6.4 trillion yuan (US$946 billion) in China, accounting for 7.1 percent of the country's GDP, according to a new report released by the China Academy of Information and Communications Technology.

COSMOPlat, Haier's industrial internet platform, is designed to allow companies to customize products at speed and scale by collecting and analyzing data from consumers, suppliers and factories, while boosting productivity and cutting costs.

"We hope to establish a platform, which helps the digital transformation and upgrading of small and medium-sized enterprises. Based on the industrial internet platform, Haier has launched 11 internet-connected smart factories worldwide," said Zhou Yunjie, president of Haier.

So far, the platform has involved 330 million users and 43,000 enterprises, and connected 26 million units of industrial equipment. It has also been applied to 15 industries, such as electronics, textiles, equipment, construction, transportation and chemical engineering, in more than 20 countries.

Yuan Yisheng, executive president of Inspur Group Co Ltd, a major server maker and big data company, said the industrial internet has become a new driving force of building the country into a strong cyberpower and manufacturing power, and provided key support for the construction of a digital China.

"The enterprises should possess the capacities of supporting cloud and informatization services, as well as own rich experiences in the advanced manufacturing segment, as part of the greater push to build an industrial internet system and help boost the upgrading of traditional industries," Yuan said.