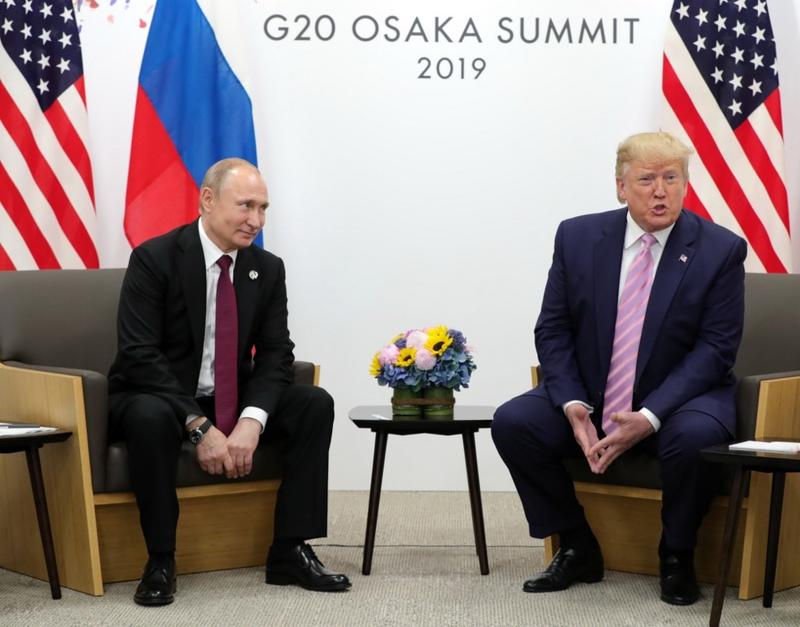 Russian President Vladimir Putin (left) and US President Donald Trump hold a meeting on the sidelines of the G20 summit in Osaka on June 28, 2019. (MIKHAIL KLIMENTYEV / SPUTNIK / AFP)

Moscow - Talks between Russian President Vladimir Putin and US President Donald Trump at the ongoing G20 summit in Japan covered multiple issues in a positive and constructive atmosphere despite their pressing differences, the Kremlin said Friday.

In general, the two countries demonstrated the mood to establish a dialogue on all issues, including the controversial

"In general, the two countries demonstrated the mood to establish a dialogue on all issues, including the controversial," Kremlin spokesman Dmitry Peskov was quoted by the RIA Novosti news agency after the meeting of the two leaders earlier in the day on the sidelines of the 14th Group of 20 (G20) summit held in Osaka.

He said that Putin and Trump discussed Syria, particularly the developments in Idlib province, and the position of Turkey in this context. They also spoke extensively on disarmament and strategic stability, according to the Tass news agency.

Peskov said that the time constraints did not allow an in-depth exchange of views, but the parties managed to state that the level of bilateral trade and economic relations did not match the potential of the two countries and "agreed to see what factors prevent the horizons of trade and economic exchange from expanding."

According to Peskov, the presidents agreed this discussion should be continued in a more specific vein between Russian Foreign Minister Sergei  Lavrov and US Secretary of State Mike Pompeo, as well as between Russian Finance Minister Anton Siluanov and US Treasury Secretary Steven Mnuchin.

Putin invited Trump next year to attend the festivities of the 75th anniversary of the end of World War II in Moscow, which the US president accepted, Peskov said.

Putin and Trump talked for about one hour and a half, according to media reports.

According to a White House pool report, the two leaders reviewed the state of the bilateral relationship and agreed that improved relations were "in each country's mutual interest and the interest of the world."