By Li Lei and Yang Zekun 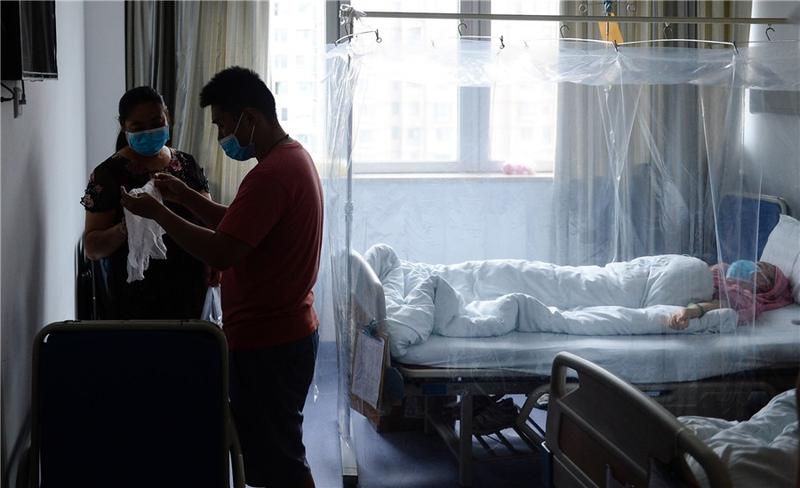 Zheng Yongtao (second left), 24, takes care of his wife Gong Xuejuan, 22, at the Yongding Hospital in Suzhou, Jiangsu province. Gong was diagnosed with leukemia in May last year, and needs to receive a stem cell transplant. Part of the cost of her treatment has been covered by crowdfunding on the internet. (JI CHUNPENG / XINHUA)

A crowdfunding effort aimed at paying the medical bills of Beijing cross-talk performer Wu Shuai has fueled a nationwide debate about how far websites should go in verifying the financial status of users seeking donations online.

The latest in many such campaigns involving limited disclosure of assets, the attempt has renewed concerns that requests for financial aid by individuals could easily become e-scams or e-begging if not monitored correctly.

The latest in many such campaigns involving limited disclosure of assets, the attempt has renewed concerns that requests for financial aid by individuals could easily become e-scams or e-begging if not monitored correctly

Wu, 34, a member of Beijing comic group Deyunshe and whose stage name is Wu Hechen, was hospitalized last month after he had a cerebral hemorrhage.

Early this month, his wife, Zhang Hongyi, launched a fundraising project on Shuidichou, one of China's most popular crowdfunding platforms, which is favored by financially strapped rural families, most of whom fall outside the social security net.

To demonstrate that her needs were genuine, Zhang posted Wu's personal details and medical records on the website. She set a target for 1 million yuan (US$145,500) to be raised, the highest sum that can be requested on the platform.

Public scrutiny began to intensify after netizens found that the Wu family, identified on Shuidichou as a registered impoverished family, owns a car and two apartments in Beijing, a city known for its high housing prices. It was also discovered that Wu was covered by health insurance.

Many people have accused the family of abusing Shuidichou for financial gain, while others blame the platform for failing to verify Zhang's financial status.

On May 4, Zhang said she would soon declare all her family's assets to prove her innocence.

She said the two apartments are held in the name of Wu's father and grandfather, and cannot be sold. She also relies heavily on the car, as she has to take care of Wu and her paralyzed father-in-law, who lives far from the hospital.

A statement released on May 5 by the Beijing Hubao Tech Co, which runs Shuidichou, said Zhang had asked two days earlier for the crowdfunding effort to be suspended.

The company said Zhang has not asked to withdraw the money that had been raised－147,959 yuan. It also said there was no legal procedure it could comply with to verify Zhang's claims.

Shuidichou, which began operating in 2016, has allowed millions of poor patients to seek financial aid. Users share stories about their difficulties, post their medical records, set a fundraising target, and are allocated a donation page that can be forwarded to social platforms such as WeChat. 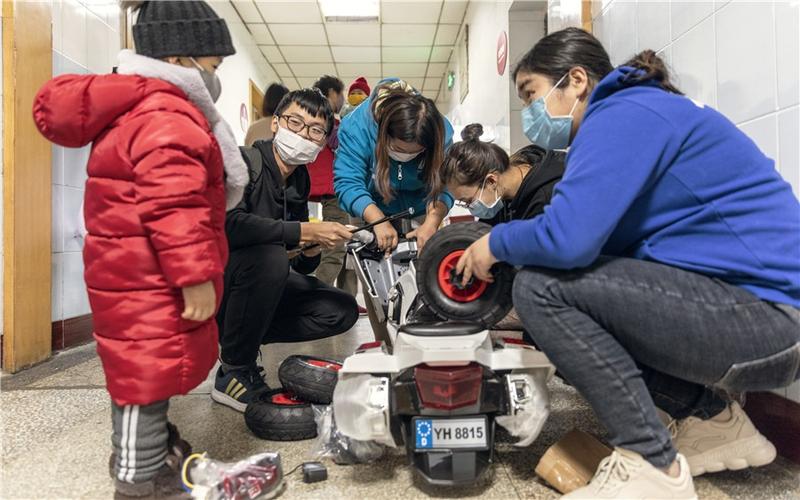 The controversy is the latest of many in recent years that have seen similar services criticized for their inadequate roles in verifying fundraisers' claims, and in detecting misuse of donations.

One of most discussed cases involves a mother in Henan province who raised money last year on Shuidichou and other platforms for her 3-year-old daughter who has eye cancer. However, the mother was suspected of using the funds to treat her son, who has a cleft palate. The daughter died later in the year.

Another case centered on a woman in the Guangxi Zhuang autonomous region who crowdfunded more than 250,000 yuan on Shuidichou for her sick daughter, but was later found to own a restaurant, an apartment and a car. The money was eventually returned to donors.

To add fuel to the fire, staff members from similar platforms were found to have offered guidance to users on their "narratives".

The recent findings come as the authorities have been working for years to restore the image of the charity sector, which has been tarnished by a number of scandals involving an established foundation and the government-backed welfare lotteries.

These endeavors saw the enactment of the Charity Law in 2016－a legal milestone for a country where public donations reached 75.4 billion yuan last year, more than twice as much as a decade ago, according to the China Association of Social Workers.

The law boosted the sector's credibility by centering the qualifications required for fundraising on a small number of charities with perfect credit records, making it compulsory for them to disclose how they plan to spend the money.

It also limits online fundraising activities to websites designated by the Ministry of Civil Affairs－which oversees the sector－in a bid to contain risks.

But the groundbreaking law does not apply to crowdfunding, as it differs greatly from fundraising projects by charities, which aim at the welfare of a group, rather than one or a few specific individuals.

Regulations introduced in 2017 by the ministry stipulated that platforms' duties go no further than alerting donors to the risk of fraud, and that those seeking donations should be held accountable for posting misleading information.

This means that crowdfunding is exempt from scrutiny under the newly enacted law that stresses transparency, which is crucial to combating embezzlement.

Experts said the rules on charities are extremely complex, and if applied to crowdfunding platforms that handle millions of requests for help, they could dramatically increase the time required and the cost, deterring people from seeking help in an emergency.

He Guoke, a lawyer with the Beijing Zhicheng Law Firm who specializes in charity-related disputes, said that under the current rules most platforms do what they are legally obliged to do.

"Codes of conduct for such platforms have been drawn up to encourage better oversight, but they lack legal force," he said.

To step up supervision of the sector, He said it is necessary to consider revising the charity rules in light of crowdfunding because of its "strong public nature".

Gui Yiwei, a lawyer with the Shanghai Alshine Law Firm who focuses on contract law, said crowdfunding platforms resemble information service providers, and are legally accountable for any misleading information posted on them.

"Publishing fake or illegal information could amount to an act of infringement and be punishable by law," he said.

Li Yinglu, a legal consultant with a private foundation, suggested more focus be placed on regulations covering online platforms, as problems stemming from crowdfunding "are shared by a number of internet-based companies".

"The internet, known for its speed and wide coverage, could magnify the impact of wrongdoing. Further revisions should (be made) to allow online platforms to take on more responsibility for what they publish," she said.

Huang Ximing, a researcher at the China Philanthropy Research Institute, said self-discipline within the sector also matters. "Laws are always the bottom lines. There's great room for platforms themselves to find out what their duties are," she said

Last year, major platforms signed a self-discipline agreement in an effort to improve transparency and verification of information.

This led to improvements that included the introduction of a system to report scams, along with a "wrongdoers' blacklist".

In a written response to a request for comment, the Ministry of Civil Affairs said it plans to guide revisions to the self-discipline agreement. 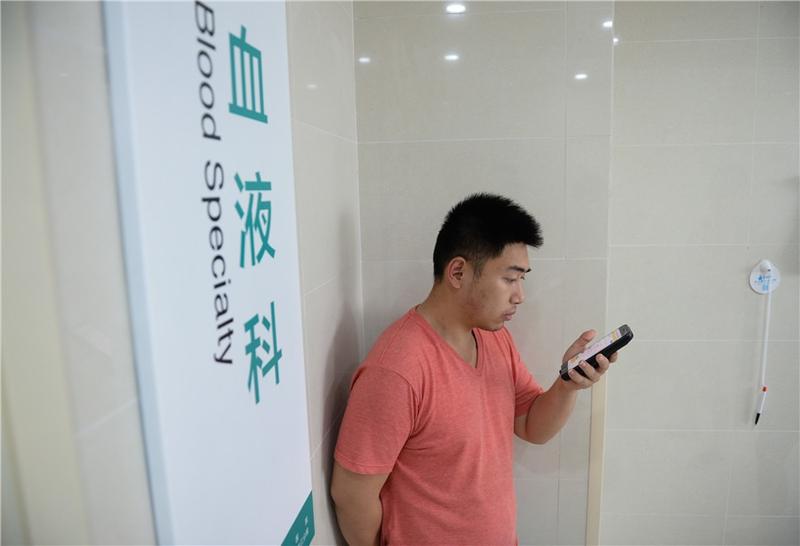 The crowdfunding sector has seen rapid growth in recent years.

This rapid growth comes in the wake of scandals involving established charities and welfare lotteries.

A case that triggered the erosion of public confidence in charity organizations involved a young woman named Guo Meimei, who in 2011 posted photos of her extravagant lifestyle online and claimed to work for the Red Cross Society of China－the country's main provider of humanitarian assistance.

Although it later emerged that she had nothing to do with the organization, an investigation exposed management flaws and a lack of transparency.

The 58-year-old Beijing native was the third of the center's directors to be investigated on such charges since 2017, following Chen Chuanshu and Bao Xuequan.

Huang, with the China Philanthropy Research Institute, said crowdfunding platforms are well-received after they are rolled out because they link donors directly to beneficiaries.

She added that their rapid growth may also be attributed to a knowledge gap among the public, as although legislators do not see crowdfunding as a charity activity in a legal sense, people regard every cent they spend as charitable funding.

"This has led to the public letting its guard down over crowdfunding, raising expectations over platforms' obligations," she said, adding that there is an urgent need to bridge the gap so that people can think twice before rushing to donate.

Gu Yan, a researcher at the National Development and Reform Commission's Academy of Macroeconomic Research, said "imperfect" social security coverage has created demand for such platforms, and is partly accountable for the fast-growing sector.

"In theory, the State benefit policy covers everyone, but the policy is still insufficient when it comes to certain individuals," he said.