HK-Zhuhai-Macao Bridge to open to traffic on Oct 24 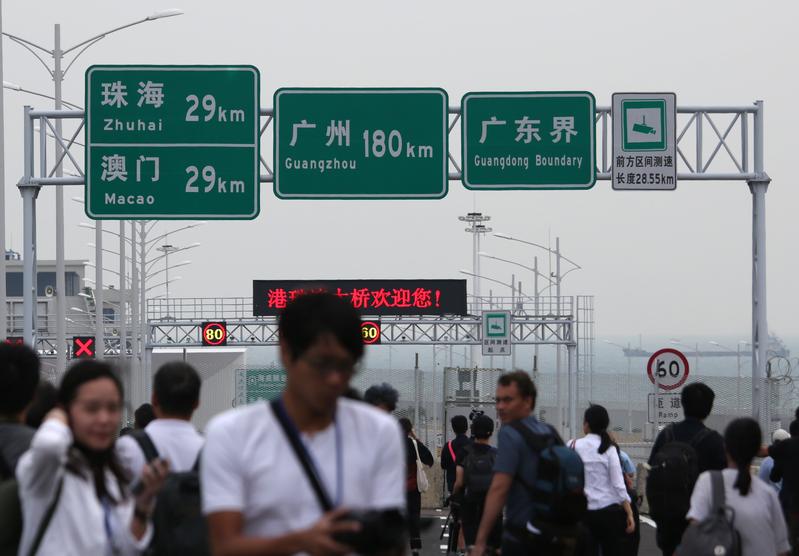 Journalists take photos on the Hong Kong section of the Hong Kong-Zhuhai-Macao Bridge during a press preview of the bridge on Oct 19, 2018. (PARKER ZHENG / CHINA DAILY)

HONG KONG – Hong Kong-Zhuhai-Macao Bridge will officially open to cross-boundary traffic at 9 am next Wednesday, a day after the bridge’s opening ceremony at the HZMB Zhuhai Port at 9 am on Tuesday, Secretary for Transport and Housing Frank Chan Fan announced on Friday.

Nine years in the making since December 2009, the 55-kilometer bridge is the first sea span across the Pearl River Estuary. Once operational, it will shorten the driving time between Hong Kong International Airport and Zhuhai from about four hours to 45 minutes, Chan told Hong Kong journalists during a tour of the bridge’s Hong Kong Port - which was open to the media for the first time.

It will serve as the focal point between Guangdong, Hong Kong and Macao, thereby further consolidating Hong Kong's position as a regional aviation and logistics hub

In light of the development of the Guangdong-Hong Kong-Macao Greater Bay Area, the bridge will be instrumental in enhancing the flow of people, goods and capital, as well as technological collaboration within the region, Chan added.

But Chan said that like many other infrastructure projects, the utilization rate of the bridge would increase gradually over time.

Since the Tuen Mun-Chek Lap Kok Link, an important road link connecting the artificial island of Hong Kong Port to the city’s urban roads, is not fully complete, all vehicles to the bridge need to share roads going to the HKIA, which is located next to the Hong Kong Port, Chan said.

The Tuen Mun-Chek Lap Kok Link is expected to be completed as soon as 2020, Chan said. As a result, the government will gradually release the quota for Hong Kong private cars to use the HZMB. This is in order to maintain the smooth operation of traffic around the airport and the Hong Kong Port at Lantau Island.

According to Su Yi, head of the Working Group on Cross-boundary Policy Research for bridge operator HZMB Authority, it is estimated that about 10,000 to 20,000 cars and 50,000 people will use the bridge every day in the first year of its operation.

By 2030, 12 years after the bridge opens, the number will rise to around 29,100 cars and 126,000 passengers a day, according to latest estimates from the special administrative region government.

Chan said the SAR government has invited the Airport Authority to submit a proposal on how to make the best use of the Hong Kong Boundary Crossing Facilities Island on Lantau Island. This is with a view to building an aerotropolis and creating synergies with the development of HKIA.

The latest Policy Address released on Oct 10 proposed “Lantau Tomorrow Vision ”, to enhance the functions of Lantau as a "double gateway" connecting the city to the world and other cities in the Bay Area.

Welcoming the bridge’s becoming operational, Teddy Chung Wai-tong, chairman of Hong Kong cross-boundary coach operator One Bus Hong Kong Macau, said the announcement was too close to the commissioning date. This left them little time to schedule their services for passengers.

Since the bridge opens on a weekday at short notice, Chung predicts the bridge’s passenger volume will not be satisfactory. He said his company will only operate three shifts of buses on the first day; tickets will be on sale on Monday.