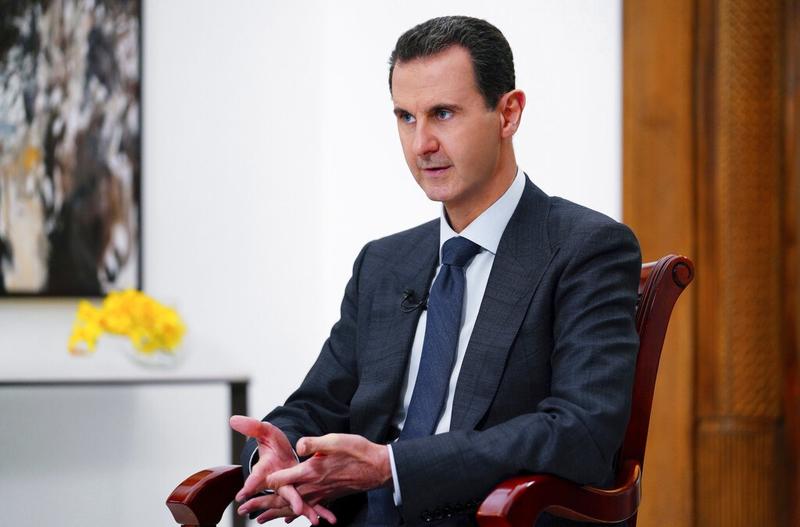 In this photo released on Nov 9, 2019 by the Syrian official news agency SANA, Syrian President Bashar Assad speaks during an interview with Italy's Rai News 24, in Damascus, Syria. (SANA VIA AP)

BEIRUT — Syrian President Bashar Assad said in an interview aired Monday that the global chemical weapons watchdog has faked and falsified a report over an attack near the capital Damascus last year "just because the Americans wanted them to do so."

Assad's comments to Italy's Rai News 24 came after the director-general of the Organization for the Prohibition of Chemical Weapons expressed confidence in the report into the deadly attack in Syria.

OPCW's chief Fernando Arias supported the report issued in March by a fact-finding mission from the watchdog that found "reasonable grounds" that chlorine was used in a deadly attack on the eastern Damascus suburb of Douma.

The mission wasn't mandated to attribute blame for the attack, but the US, Britain and France blamed Syria and launched punitive airstrikes. Syria denied responsibility.

Assad spoke in the week of a letter purportedly by a member of the OPCW team released by secret-spilling website WikiLeaks called its conclusions biased.

"That's what the OPCW organization did – they faked and falsified the report, just because the Americans wanted them to do so," Assad said, speaking in English. "So, fortunately, this report proved that everything we said during the last few years, since 2013, is correct."

"We were right, they were wrong. This is proof, this is concrete proof regarding this issue," Assad said about the leaks. He added that "again, the OPCW is biased, is being politicized and is being immoral."

The watchdog's chief, Arias, said two weeks ago that the report was written following careful consideration of all information. He added that he stand by the "impartial and professional conclusions reached by the fact-minding mission."

Arias said the Douma attack, which killed dozens, is among nine incidents being investigated by a new attribution mechanism set up by the OPCW called the Investigation and Identification Team.

Assad's office said the president gave the interview to RAI 24 on Nov. 26 and that both parties agreed that the interview would air on Dec. 2, on both Italian RAI News 24 and Syrian national media outlets.

It added that RAI asked that the interview be postponed twice and Assad's office said that it will broadcast the interview in full, on Monday which they did.

RAI later issued a statement saying the interview wasn't commissioned by any of the RAI news organs "thus it was impossible to agree in advance about a date to broadcast it."