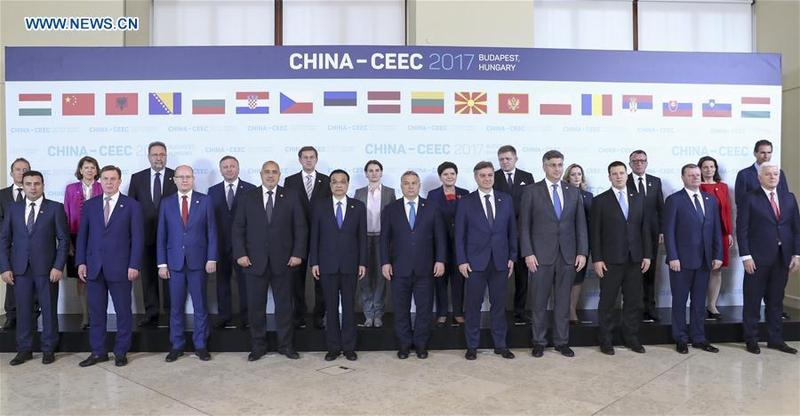 BELGRADE - With the ongoing sixth meeting of heads of government of China and 16 Central and Eastern European (CEE) countries in Hungary, experts agreed that China-CEE cooperation has boosted European development and China-European Union (EU) ties.

From the first 2012 meeting in Warsaw, Poland, all the way through Bucharest, Belgrade, Suzhou, Riga and Budapest, the China-initiated "16+1" cooperation mechanism has shown its vitality across the region.

Neven Cveticanin, a senior research associate at the Institute of Social Sciences of Serbia, told Xinhua in an interview that the 16+1 mechanism "led to an increase in economic cooperation between China and the area of Central and Eastern Europe."

Thanks to progressing bilateral cooperation, bridges, roads and railways have been and are being built with the assistance of China here in Serbia. The two countries abolished their visa regimes with each other and China's Hainan Airlines launched its first flight to Serbia's capital this September, he said.

Through strengthening of economic relations, diplomatic and political relations got stronger as well

"Through strengthening of economic relations, diplomatic and political relations got stronger as well," he added. In 2016, the two countries upgraded their relations to a comprehensive strategic partnership.

Experts from other countries of the region had similar things to say. Marton Schoberl, director of the Institute for Foreign Affairs and Trade in Hungary, described 16+1 as "a new chapter in their partnership."

Schoberl pointed out at a recent conference of China-CEE think tanks in Budapest that the 16+1 formation includes "measures and programs in economy, trade, infrastructure, finance, tourism, education, agriculture, and culture."

"In its stage of development, the 16+1 initiative has been very successful in attracting the attention of many politicians, media, social scientists and normal citizens," said Dr. Marek Hrubec, director of the Center of Global Studies of the Czech Academy of Sciences.

"The economic cooperation between governments and large companies is on its way and has been progressing in the last five years," Hrubec said.

"When it comes to people-to-people exchanges and mutual understanding, I think that this network, this cooperation works very well, and it is important that we can learn more about each other, meaning not only from China, but also from other CEE countries," she told Xinhua.

The CEE region is commonly seen as a new potential growth point for Europe. Against the backdrop of financial problems and growing bottlenecks in Europe, the 16+1 mechanism will no doubt inject momentum into the development of the region, which will also boost the development of Europe.

Chinese Ambassador to Serbia Li Manchang once told Xinhua in an interview that bilateral achievements between China and Serbia have set an example for China-CEE cooperation, which, to some extent, promotes the development of China-Europe ties.

Cveticanin quoted late Chinese leader Deng Xiaoping as saying that "it doesn't matter if the cat is black or white, as long as it hunts mice." He told Xinhua that "every type of cooperation is useful to both Europe and China, despite their occasional disagreements."

He believed that the CEE represents a link between China and Europe, which, in a strategic, geopolitical and diplomatic sense, strengthens the position of CEE countries.

Agnes Szunomar, a researcher at the Institute of World Economics of the Hungarian Academy of Sciences, viewed the China-CEE mechanism as a challenge and competition for both the EU and China.

"The challenge for the Union is to acknowledge that it has a competitive position. Competition is fundamentally good; competition is anticipated; and competition drives companies, firms and individuals to improve their services," Szunomar said.

Considering competition as a healthy thing, Szunomar also took this mechanism as an opportunity for China to strive for a harmonious relationship with the EU.

Some people doubt the basis and quality of China-CEE cooperation as some of the CEE countries are EU members while some are not. Regarding this, Pendrakowska said "this initiative is a long-term process, and the non-member countries are in the procedure of accession to the EU."

Nevertheless, the differences between these countries need to be taken into consideration.

"They have divergent interests and competing points of view when it comes to developing relations with China. Therefore, a key to strengthening these relations is the Chinese approach (attitude), concerning, for example, facilitating access to the Chinese market for enterprises from this region, as well as more importance put on the greenfield investments made by several '16+1' countries together and co-financed by China," said Marcin Przychodniak, an analyst at the Asia-Pacific program of the Polish Institute of International Affairs.

Cveticanin said the current cooperation is dominantly political and economic and expressed the hope that cooperation in areas of education and science could also be enhanced, so that all-round cooperation could be achieved.

To this end, Pendrakowska said "more political will was needed to bring the projects to the next level."