In step with modern life 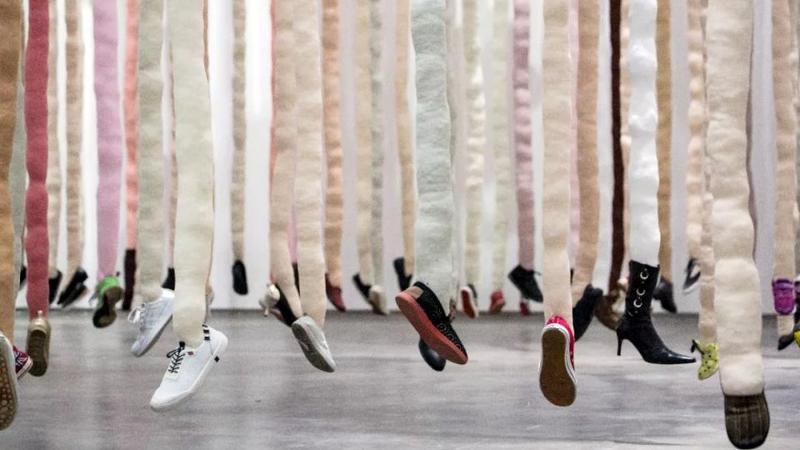 Beijing-based artist Yin Xiuzhen, 55, is known for utilizing everyday objects, such as used clothes of her own and those she collects from others, in creating her work, something that distinguishes her feminine sensitivity.

She used secondhand clothes of black, gray and white in a 6-meter-high installation, titled Trojan, which stood as the centerpiece of her exhibition at Pace Beijing earlier this year. The towering work depicts a figure braced-for-impact on an airplane, stirring discomfort and an unsettling feeling within the viewer. Conversely, people can walk into the installation via a door at the rear, and the spacious interior gives them a comforting sense of safety, like that of an unborn child in the womb. With this piece, Yin points to the loneliness, insecurity and anxieties that haunt individuals in our modern society.

Yin also made an artistic material from a river as a way to dwell on the relationship between humans and nature. In a performance piece from the 1990s, entitled Cleaning River, she gathered water from a polluted river in Chengdu, Sichuan province, and froze it into ice cubes. She transported them back to the riverside, and asked people to brush the ice clean.

Yin's work brings these unnoticeable materials, which often encapsulate private experiences and demands, to the public's attention. Her approach exposes people to the paradox that one takes delight in a highly developed, material world, yet, at the same time, cherishes the simplicity and peace of a lifestyle rooted in the past.

People will find a similar sentiment in Yin's recent presentation, Walking, Thinking, a beautiful, serene forest of 500 pairs of hanging shoes that occupy a whole exhibition hall at Museum of Contemporary Art Yinchuan in the Ningxia Hui autonomous region.

The single-installation exhibition is the seventh installment of the museum's "made in China" project - where it invites one artist to produce site-specific work using local materials - through which the museum hopes to encourage people to think about the truly valuable ideas of Chinese culture and philosophy.

Yin says she collects used clothes as a way to collect people's varied memories. For this exhibition, she and the museum launched a campaign among Yinchuan's residents months earlier to donate a pair of shoes they feel especially attached to.

Shoes are the bearers of people's bodies and experiences; they show a person's aesthetic views, as well as the choice of his or her life's path, Yin says.

Around 600 pairs of shoes were delivered to the museum, and Yin chose 500 of them. They are of men and women, the young and the elderly. Some have the patina of age upon them, like they're no longer being used, while others look fashionable and expensive. 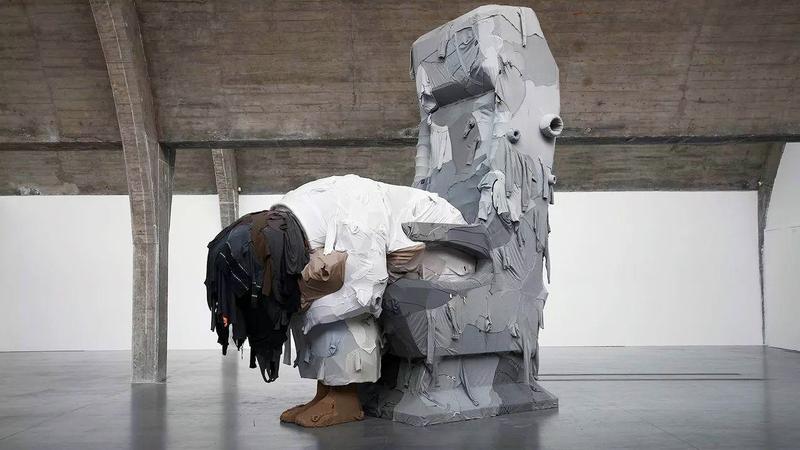 Yin uses clothing to create Trojan, an installation for her solo exhibition, Back to the End, at Pace Beijing earlier this year. (PHOTO PROVIDED TO CHINA DAILY)

The shoes were cleaned and dried, and each pair is suspended by a long fabric rope - which varies in color from white, pink, nude and brown and was tailor-made in Beijing and transported to Yinchuan.

"The ropes were produced to look like our legs," Yin explains, "but they are of exaggerated length to symbolize that, as we keep walking, our experiences grow."

People were asked to write the stories of the shoes they chose to contribute to Yin's work and, as visitors walk deeper into the forest of "legs", they will find a standing glass box in the middle of it. Inside, there are a selection of the notes written by the shoes' owners that Yin finds touching and thought provoking.

Li Yiman, 34, one of the footwear donors, wrote about how she tracked down a pair of girl's plastic sandals in the style of the 1980s. Li runs a coffee shop in the city of Wuzhong, a 40-minute drive from MOCA Yinchuan, which she frequents and where she first learned of Yin's project.

Li wanted to donate the pink sandals she wore a lot during her childhood, but they had been thrown away. With the help of a friend in Shanghai, she found a similar pair which cost her 300 yuan (US$43).

"When I opened the delivery box and saw the shoes, I was overwhelmed by my happy childhood memories," she says. "Suddenly I felt a bit unwilling to give the shoes away. I wanted to hang them in my shop."

Yin observes: "People sent us not only shoes but warm, and sometimes lost memories that could be shared, together, with honesty."

She says we still feel lonely even among others. "Every lonely soul is like the fabric leg in this forest. We move forward through these shoes, it is like we encounter different people in society. We observe each other, feel each other and try to find empathic emotions."

Zhang Yun from MOCA Yinchuan's publicity department says that many owners say the shoes mean so much to them and ask if they can be returned after the exhibition ends.

Song Dong, Yin's husband and an established artist in his own right, spent a week at the museum helping complete the installation.

"You can find in this forest of shoes the changes of time and the course of history, also you can feel the differences between men and women and gap between generations in the way they view relationships, fashion styles and consumption," he says.

"It is as if we step into someone else's walk of life, and then we try to think the way they do, comparing it with ourselves. This process truly shows the enchanting side of art."