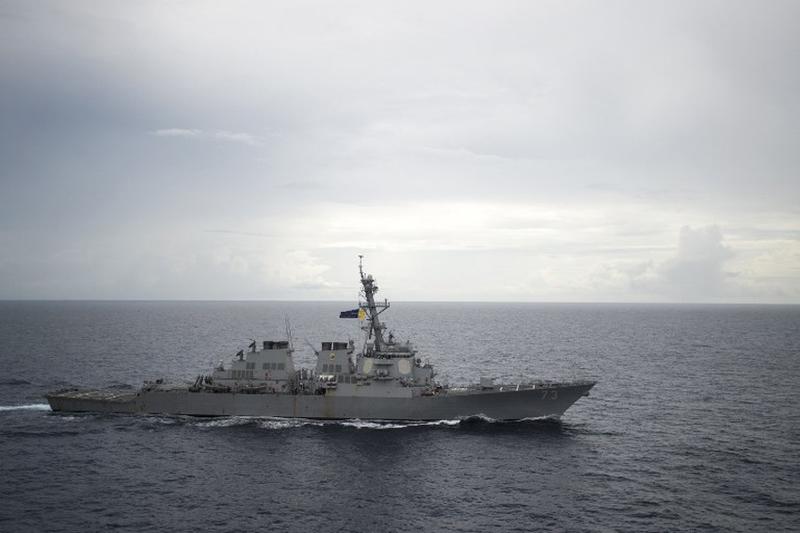 This US Navy photo shows the Guided-missile destroyer USS Decatur as it operates in the South China Sea on Oct 13, 2016. A spokesperson for China’s foreign ministry says the US destroyer entered neighboring waters of islands and reefs of China's Nansha Islands on Sept 30, 2018 without permission form the Chinese government. (PETTY OFFICER 2NDCLASS DIANA QUINLAN / NAVY MEDIA CONTENT OPERATIONS (N / AFP)

BEIJING – China on Tuesday expressed strong dissatisfaction and firm opposition to a US warship's entry into the neighboring waters of China's islands and reefs in the South China Sea.

Spokesmen for the Chinese foreign ministry and Chinese military spoke separately on the incident, urging Washington to stop such provocations.

The Chinese side strongly urges the US side to immediately correct its mistakes and stop such provocative operations.

"On Sept 30, without permission of the Chinese government, the US destroyer Decatur entered neighboring waters of islands and reefs of China's Nansha Islands," said Hua Chunying, spokesperson for China’s foreign ministry.

The Chinese Navy identified the US warship, warned and expelled it, she said.

China has indisputable sovereignty of the Nansha islands and its adjacent waters, the spokesperson stressed.

With joint efforts of China and the Association of Southeast Asian Nations members, the current situation in the South China Sea has continued to stabilize and get better, Hua said.

Repeated provocative US moves under the pretext of the so-called "freedom of navigation operation" have threatened peace and stability in the region, she pointed out, adding that such US moves are against the common will of countries in the region and the basic international norms.

"The Chinese side strongly urges the US side to immediately correct its mistakes and stop such provocative operations," she said.

China would take all necessary measures to safeguard its national sovereignty and security.

Reacting to the incident, Wu Qian, spokesperson for the Ministry of National Defense, said: “The USS Decatur guided missile destroyer arbitrarily entered waters off China's islands and reefs in the South China Sea on Sept 30.”

“China has indisputable sovereignty over the islands in the South China Sea and their adjacent waters.”

Currently, with the joint efforts by China and ASEAN countries, the situation in the South China Sea is developing towards a stable and positive direction, he said.

“However, the US side has sent warships into waters near China's islands and reefs in South China Sea time and again, which has posed a grave threat to China's sovereignty and security, severely damaged the relations between the two militaries, and significantly undermined regional peace and stability.

“The Chinese military will fulfill its defense duty and continue to take all necessary measures to firmly safeguard the sovereignty and security of the country, as well as the regional peace and stability,” said the spokesperson.