Gaza parents struggle to join kids for treatment in Israel 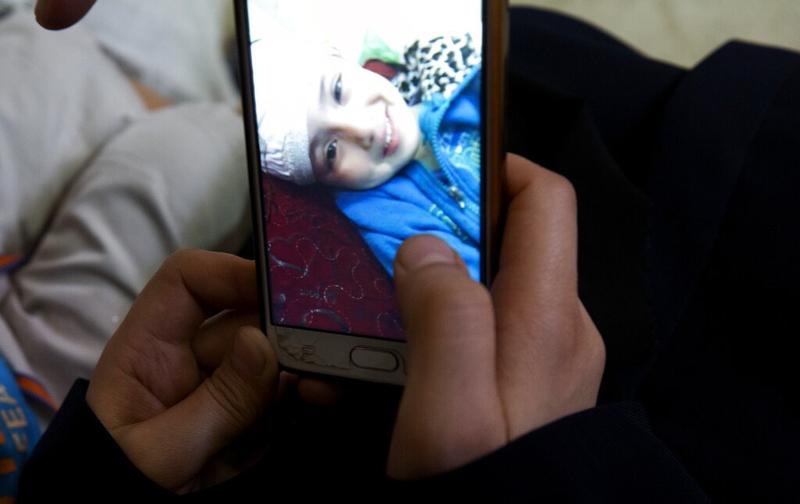 In this May 27, 2019, photo, Muna Awad, mother of 5-year-old Aisha a-Lulu, shows her photo while Aisha is in a Jerusalem hospital, at the family home in Burij refugee camp, central Gaza Strip. (HATEM HOUSSA / AP)

JERUSALEM — When Palestinian preschooler Aisha a-Lulu came out of brain surgery in a strange Jerusalem hospital room, she called out for her mother and father. She repeated the cry over and over, but her parents never came.

Instead of a family member, Israeli authorities had approved a stranger to escort Aisha from the blockaded Gaza Strip to the east Jerusalem hospital. As her condition deteriorated, the child was returned to Gaza unconscious. One week later, she was dead.

A photo of Aisha smiling softly in her hospital bed, brown curls swaddled in bandages, drew an outpouring on social media. The wrenching details of her last days have shined a light on Israel's vastly complex and stringent system for issuing Gaza exit permits.

It is a bureaucracy that has Israeli and Palestinian authorities blaming each other for its shortfalls, while inflicting a heavy toll on Gaza's sick children and their parents.

"The most difficult thing is to leave your child in the unknown," said Waseem a-Lulu, Aisha's father. "Jerusalem is just an hour away, but it feels as though it is another planet."

So far this year, roughly half of applications for patient companion permits were rejected or left unanswered by Israel, according to the World Health Organization. That has forced over 600 patients, including some dozen children under 18, to make the trek out of the territory alone or without close family by their side.

The system stems from the Hamas militant group's takeover of Gaza in 2007, when it violently ousted the Western-backed Palestinian Authority. Israel and Egypt responded by imposing a blockade that tightly restricted movement in and out of Gaza.

READ MORE: Calm appears to hold in Gaza despite exchange of fire

The blockade, which Israel says is necessary to prevent Hamas from arming, has precipitated a financial and humanitarian crisis in the enclave. For years, Gaza's 2 million residents have endured rising poverty and unemployment, undrinkable groundwater and frequent electricity outages. Public hospitals wrestle with chronic shortages of drugs and basic medical equipment. Israel blames Hamas, which it considers a terrorist group, for the crisis.

In what it portrays as a humanitarian gesture to help Gaza's civilians, Israel permits Palestinian patients to seek medical treatment at hospitals in Israel and the West Bank once they pass a series of bureaucratic hurdles. COGAT, the Israeli defense body that issues the permits, says it insists that all patients cross with an escort, usually a close relative, unless they wish to go alone or require immediate treatment that doesn't allow time for security screening. 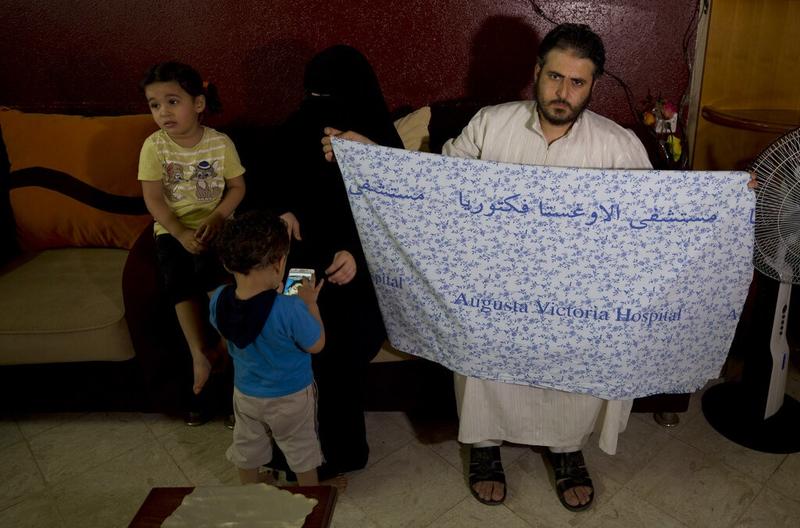 In this May 27, 2019, photo, Waseem, father of 5-year-old Aisha a-Lulu, holds the hospital bed sheet his deceased daughter was covered with when she was sent home from a Jerusalem hospital, at the family home in Burij refugee camp, central Gaza Strip. (HATEM MOUSSA / AP)

COGAT, the Israeli defense body that issues the permits, says it insists that all patients cross with an escort, usually a close relative, unless they wish to go alone or require immediate treatment that doesn't allow time for security screening

In order to get a permit, patients must first submit a diagnosis to the West Bank-based Palestinian Health Ministry, proving that their treatment isn't available in Gaza. Then a Palestinian liaison requests exit permits from COGAT, which reviews the applications and passes them to Israel's Shin Bet security agency for background checks.

According to WHO, the approval rate has plummeted in recent years.

A COGAT official disputed the figures, saying they don't take into account that the number of permit applications has grown as Gaza's health care system deteriorates, and that Israel has started issuing permits less regularly but for prolonged stays. The official, speaking on condition of anonymity under agency rules, said COGAT is working to ease restrictions by designating a permit specifically for parents of child patients.

After being diagnosed with brain cancer, Aisha received immediate approval to get out of Gaza for what was hoped to be life-saving surgery. But when her parents approached the Palestinian Civil Affairs Commission for escort permits, their process ground to a halt.

To their bewilderment, Palestinian officials told them not to apply, saying it was too risky.

At 37, Waseem is below the age that Israel deems acceptable for swift entry on security grounds. Today, all men under 55 require extra screening, which means waiting, usually for months, according to Mor Efrat, the Gaza and West Bank director for Physicians for Human Rights Israel. As for Aisha's mother, Muna, a quirk of her upbringing in Egypt left her without an official Israeli-issued ID card required to receive a permit.

"We tell families to find a companion that won't give Israel any reason to refuse," said Osama Najar, spokesman for the Palestinian Health Ministry. "We want to save the child and, yes, that can mean sending them alone."

In this sense, the Palestinian Authority "acts as a subcontractor for Israel," said Efrat, forcing parents to make a difficult choice: delay their child's urgent care, or search for someone else that Israel would be more likely to let cross. 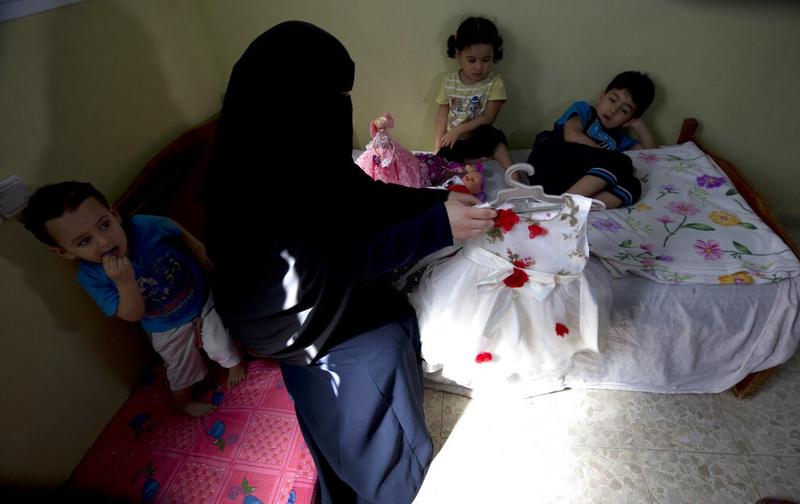 In this May 27, 2019, photo, Muna Awad, mother of 5-year-old Aisha a-Lulu, and her children sit on what used to be Aisha's bed at the family home in Burij refugee camp in central Gaza Strip. (HATEM HOUSSA / AP)

Aisha's parents said they scoured for alternatives, applying for an aunt and her 75-year-old grandmother, but Israel rejected both.

The girl's only remaining hope, the Palestinian office told them, was to apply for as many older women as possible from their extended social network. A permit for Halima al-Ades, a remote family acquaintance whom Aisha had never met, was approved.

Muna said she had no choice but to sign COGAT's consent form and whisk her daughter out of Gaza for immediate treatment. She said the frustration of the sprawling bureaucracy, and the painful memory of her 5-year-old daughter crying for her on the phone during her last days, haunts her.

"It was the hardest time of my life," she said. "My heart was being ripped out every day and every hour."

The Shin Bet declined to comment on the case. But in a statement, it emphasized Israel's security concerns about Gaza patients and their companions. "The terrorist organizations in the Gaza Strip, headed by Hamas, are working tirelessly to cynically exploit the humanitarian and medical assistance provided by Israel," it said.

This means that Palestinians are often turned down without explanation or for reasons out of their control. "I feel confident telling you that most of these rejections are arbitrary," said Efrat, of Physicians for Human Rights Israel.

Alon Eviatar, a former high-ranking official with COGAT, said the goal remains the same. "On the ground, this means to make daily life as difficult as possible for Hamas, without crossing the red line to humanitarian disaster," he said.

Eviatar acknowledged that the Israeli permit system was ineffective, inefficient and overburdened. "We are desperate for an alternative, to get Gaza to take care of itself and stop relying on Israel," he said.

Aisha's doctor in Jerusalem, Ahmad Khandaqji, said he has treated countless lone patients from Gaza over the past year, but that Aisha's story stuck with him. "She felt abandoned and betrayed," he said. "We saw how that directly impacted her recovery."