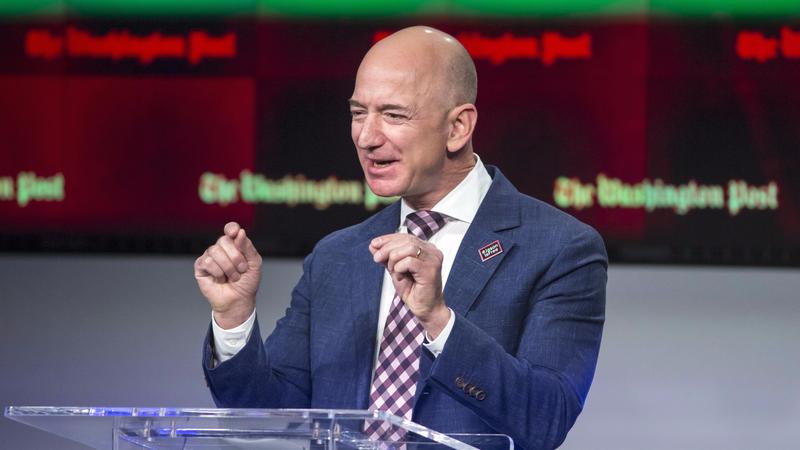 In this Jan 28, 2016, file photo, billionaire Amazon founder and Washington Post owner Jeff Bezos talks about the history and character of the Post during a dedication ceremony for its new headquarters in Washington. (J. Scott Applewhite, File / AP Photo)

Microsoft founder Bill Gates reclaimed the lead by afternoon, as Amazon's stock fell nearly 1 percent for the day to US$1,046.

Amazon shares have been trading at a record high. They hit US$1,083.31 at about noon Thursday. According to securities filings, Bezos owns about 80 million shares, or 17 percent; those shares were valued at more than US$87 billion at the peak. Bezos also owns The Washington Post through a holding company.

Forbes said Bezos' net worth was about US$90.6 billion when the market opened Thursday. Gates had US$90.1 billion. Forbes said Gates would have been the undisputed leader had he not given billions of dollars away to various philanthropic causes. Bezos issued a request for philanthropic ideas in a tweet in June, just before Amazon announced a US$13.7 billion deal for organic grocer Whole Foods.

The changes in Bezos' fortune coincided with Amazon's report of a 77 percent decline in quarterly profit on heavy spending. Shares fell another 2 percent in after-markets trading as the company missed Wall Street's expectations on profit.

Amazon said it earned US$197 million, or 40 cents per share, in the second quarter, down from US$857 million, or US$1.78 per share, a year ago. Analysts surveyed by Zacks investment Research were expecting earnings of US$1.40 per share on revenue.

Revenue grew 25 percent to US$38 billion, compared with US$30 billion a year ago. That topped expectations of US$37.2 billion.

But Amazon has long been known for investing the money it makes back into its businesses. For the second quarter, Amazon reported operating expenses of US$37 billion, a 28 percent increase from a year earlier.

In a conference call, Amazon Chief Financial Officer Brian T. Olsavsky braced investors for even more spending in the second half of the year. Amazon will continue to open new warehouses to fulfill orders, even though sales tend to slow down in the third quarter before rising again during the holidays. He also said Amazon has been spending more to acquire video for its streaming service and to lease properties for data centers to meet growth in its cloud-services business.

Just a day earlier, Amazon said it plans to hire thousands of warehouse workerson the spot at job fairs across the country. Nearly 40,000 of the 50,000 jobs will be full time, and most of them will count toward Amazon's previously announced goal of adding 100,000 full-time workers by the middle of next year.

And Amazon will be spending even more to buy Whole Foods if the deal goes through, as expected. Olsavsky said he expects Whole Foods will complement Amazon's other channels for selling groceries, including AmazonFresh deliveries and an experimental Go convenience store in Seattle.

"There's no one solution," he said. "We'll see how customers respond."