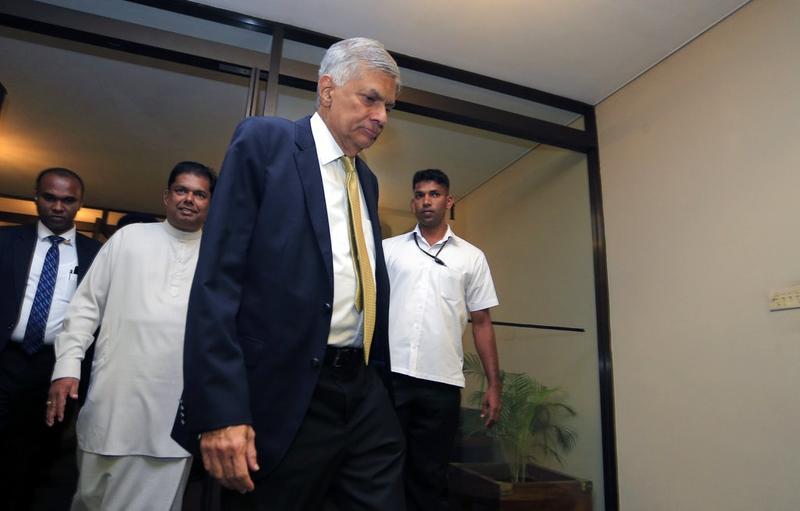 COLOMBO, SRI LANKA - Sri Lanka's prime minister comfortably overcame a no-faith vote on Wednesday, strengthening his hand within the unity government formed by parties traditionally opposed to each other.

The motion against Prime Minister Ranil Wickremesinghe brought by lawmakers supporting the country's former strongman Mahinda Rajapaksa and debated in Parliament received 76 votes in favor and 122 against.

Twenty-six lawmakers were absent during the vote and the speaker doesn't usually vote.

The parties within the unity government are led by Wickremesinghe and President Maithripala Sirisena.

The vote is unlikely to resolve intra-government tensions after some Cabinet ministers representing Sirisena's party voted for Wickremesinghe's ouster.

Cabinet spokesman Rajith Senaratne told reporters after the vote that members would not allow some 15 lawmakers - some of them Cabinet ministers who voted for Wickremesinghe's ouster - to continue in the government.

The main allegation against Wickremesinghe involved his appointment of a Singaporean as the central bank governor who is now accused of leaking inside information to benefit his son-in-law in a treasury bond sale.

Sri Lankan police have sought Interpol assistance to arrest Arjun Mahendran, the former bank governor. His son-in-law and another official are already under arrest.

According to a presidential commission's findings, Mahendran's son-in-law allegedly made profits of US$72 million from the dealings while the state lost about US$55 million.

A victory for the no-faith motion would have boosted Rajapaksa's push to recapture power.

Opposition lawmaker Dinesh Gunawardena opened the debate on the motion, saying Wickremesinghe was responsible for the scam because he appointed a foreigner to head a sensitive institution such as the central bank, and that its impact has been felt in the country's economy, with low investor confidence.

Government Minister Lakshman Kiriella defended Wickremesinghe, saying two inquiries into the bond scam - one by a parliamentary committee and the other by the presidential commission - found no fault with the prime minister.

Minority leader Rajavarothayam Sampanthan, who heads the largest ethnic Tamil party in Parliament, said his party would oppose the motion because it wants the president and the prime minister to implement their pledge to draft a new constitution protecting the political rights of minority Tamils after a protracted civil war that ended in 2009.

"They want to first defeat the prime minister. The next target will be the president; they want the government brought down," Sampanthan said.

Rajapaksa was defeated in the 2015 presidential election after Sirisena, who was his health minister, defected and joined Wickremesinghe in an election alliance.

After being elected president as a neutral candidate, Sirisena accepted an offer from Rajapaksa to take over his Sri Lanka Freedom Party. Since then, party rivalries have been simmering within the government.