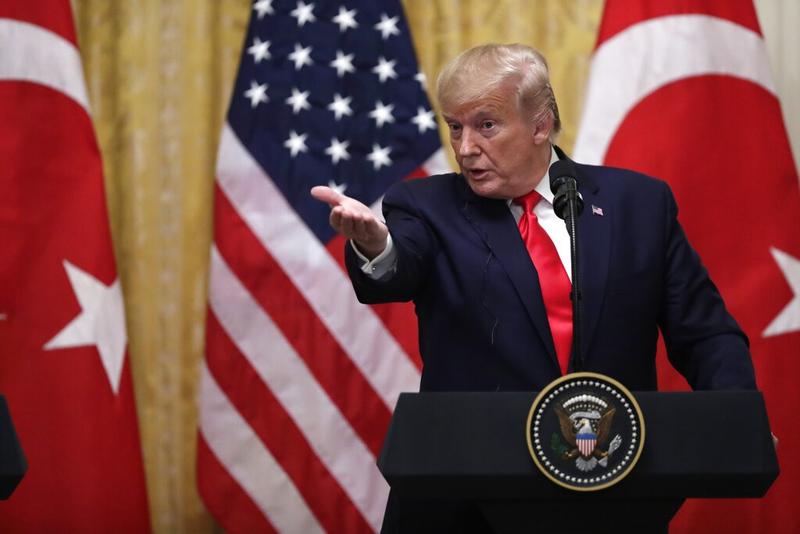 US President Donald Trump at a news conference with Turkish President Recep Tayyip Erdogan in the East Room of the White House, Nov 13, 2019, in Washington. (EVAN VUCCI / AP)

WASHINGTON — The US House Committee on Intelligence held the first public hearing Wednesday since House Democrats launched an impeachment inquiry into President Donald Trump in September to determine whether he abused his office in his interactions with Ukraine.

Devin Nunes, ranking member of the Intelligence Committee and the top Republican on the panel, in his opening remarks slammed the Democrats' impeachment effort as an orchestrated smear campaign against Trump

Appearing for the inaugural public hearing were William Taylor, Charge d'Affairs of the US Embassy in Ukraine, and George Kent, deputy assistant secretary of State for European and Eurasian affairs. Taylor and Kent both attended closed-door depositions with House lawmakers in October, during which they voiced concerns about the president's dealings with Kiev.

In his prepared opening statement, House Intelligence Committee Chairman Adam Schiff, a California Democrat and Trump's frequent target of attacks since the impeachment proceedings began, said impeachment investigators are seeking answers from witnesses whether Trump leveraged a White House meeting with Ukrainian President Volodymyr Zelensky and millions of US dollars in military aid to the country to pressure the Ukrainian leader to investigate Trump's political rivals.

"And if President Trump did either, whether such an abuse of his power is compatible with the office of the presidency?" Schiff said. "The matter is as simple, and as terrible as that."

Schiff said "there are still missing pieces" in the chain of events relating to the Ukraine controversy, despite the evidence gathered from previous depositions by subpoenaed witnesses. He accused Trump of stonewalling the impeachment effort by instructing government agencies to ignore congressional subpoenas for documents and prohibiting witnesses from appearing for testimonies as requested by House committees.

"These actions will force Congress to consider," the chairman said, "whether Trump's obstruction of the constitutional duties of Congress constitute additional grounds for impeachment."

Devin Nunes, ranking member of the Intelligence Committee and the top Republican on the panel, in his opening remarks slammed the Democrats' impeachment effort as an orchestrated smear campaign against Trump.

"We're supposed to take these people at face value when they trot out a new batch of allegations, but anyone familiar with the Democrats' scorched-earth war against President Trump would not be surprised to see all the typical signs that this is a carefully orchestrated media smear campaign," Nunes said.

He criticized the Democrats for "pushing impeachment forward without the backing of a single Republican." The Democratic-controlled House on Oct 31 passed a resolution formalizing the impeachment inquiry with no Republican members voting for it.

Nunes listed three "crucial questions" the GOP expected for the hearings: The full extent of Democratic coordination with the whistleblower whose revelation of the Trump-Ukraine interactions triggered the impeachment inquiry; the extent of Ukraine's meddling in Trump's 2016 campaign; and the reason for the Ukrainian energy company Burisma to hire former Vice President Joe Biden's son Hunter, as well as whether Hunter's position affected government actions of the administration of former President Barack Obama.

Kent, the State Department official, said in his opening statement that he raised concerns as early as February 2015 about Hunter Biden's status as a board member at Burisma "could create the perception of a conflict of interest," stressing, however, that he "did not witness any efforts by any US official to shield Burisma from scrutiny."

Trump asked Zelensky in a phone call on July 25 to "look into" how Joe Biden "stopped the prosecution" of Burisma. In January 2018, Biden told an event at the Council on Foreign Relations how he in 2016 pressured the Ukrainian authorities to fire Viktor Shokin, the country's former prosecutor general who was leading the investigation into Burisma at the time.

Kent also told the committee that he became aware of efforts by Trump's personal lawyer Rudy Giuliani and his associates to "run a campaign to smear" diplomats at the US embassy in Kiev, including former US Ambassador to Ukraine Marie Yovanovitch who was ousted in May. He said it "became clear" to him that "Giuliani's efforts to gin up politically-motivated investigations were now infecting US engagement with Ukraine." 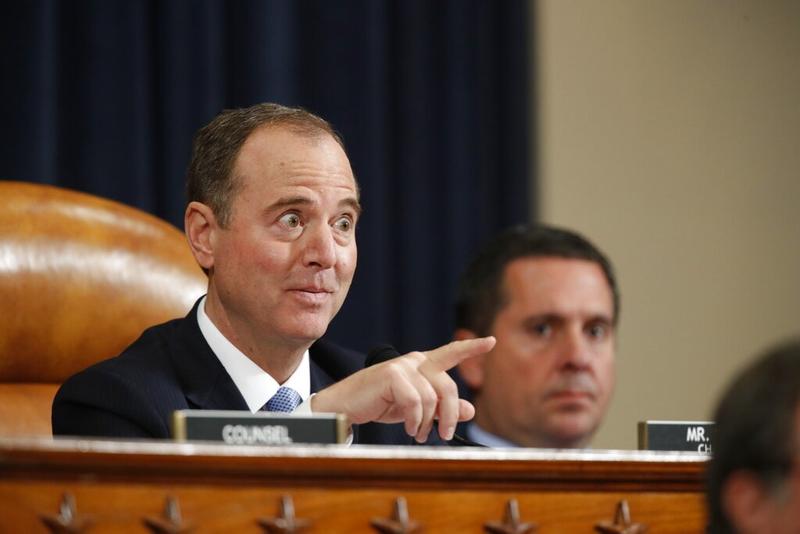 It was "unexpected, and most unfortunate," that Americans "launch attacks on dedicated public servants advancing US interests in Ukraine," Kent said, adding that "those attacks undermined US and Ukrainian national interests and damaged our critical bilateral relationship."

Taylor, the top US diplomat in Ukraine, testified that in mid-July "it was becoming clear" to him that a meeting with Trump at the White House that Zelensky wanted "was conditioned on the investigations of Burisma and alleged Ukrainian interference in the 2016 US elections." He added that the condition "was driven by the irregular policy channel I had come to understand was guided by Mr Giuliani."

Taylor told lawmakers in his opening statement that withholding security assistance to Ukraine "in exchange for help with a domestic political campaign in the United States would be crazy."

He said he, on Sept 1, was "alarmed" after hearing for the first time from Tim Morrison, the top Russia and Europe adviser on the National Security Council, that not only the White House meeting between Trump and Zelensky, but also the security assistance to Ukraine "was conditioned on the investigations."

When asked to elaborate on that comment, Taylor said "the White House meeting was one thing, security assistance was much more alarming."

Revealing a new piece of information about Trump's alleged pursuit for investigations from Ukraine, Taylor said a staffer of his was with US Ambassador to the European Union (EU) Gordon Sondland when the latter called Trump from a restaurant in Warsaw, Poland, on July 26 to inform the president of his meetings in Kiev. That was one day after Trump made the controversial phone call with Zelensky that has been at the center of the impeachment investigation.

Taylor said he didn't give the account during his Oct 22 deposition because he was only told about the episode last Friday.

Jim Jordan, an Ohio Republican, used his questioning opportunity to challenge the accuracy of Taylor's testimony as the diplomat's narration of events was mostly based on second-hand information. Citing the testimony from Sondland, the EU ambassador, Jordan said to Taylor: "We've got six people having four conversations in one sentence and you told me this is where you got your clear understanding."

"It's a witch hunt, it's a hoax," Trump said Wednesday afternoon, repeating the characterization of the public hearing he used recently. "I'm too busy to watch it. So, I'm sure I'll get a report," he told reporters in a meeting with Turkish President Recep Tayyip Erdogan at the White House.

White House Press Secretary Stephanie Grisham said earlier in the day Trump was not watching the hearing and was instead having meetings Wednesday morning. Yet, the president was constantly tweeting and retweeting about what was happening on Capitol Hill.

Trump's tweets include video clips of the hearing as well as critical comments from Republicans. In two separate morning tweets, the president called the two witnesses "NEVER TRUMPERS" and urged impeachment investigators to "READ THE TRANSCRIPT" of his call with Zelensky that has been released by the White House.

Grisham said on Twitter the witnesses "can't provide any first hand knowledge of any wrongdoing" by Trump, and "have never even spoken" with the president during the impeachment inquiry.

Her claims were refuted by Chris Murphy, Democratic senator from Connecticut, who tweeted that "plenty of people who talked directly to Trump about the extortion, and the White House knows this because they have refused to allow any of them to testify."