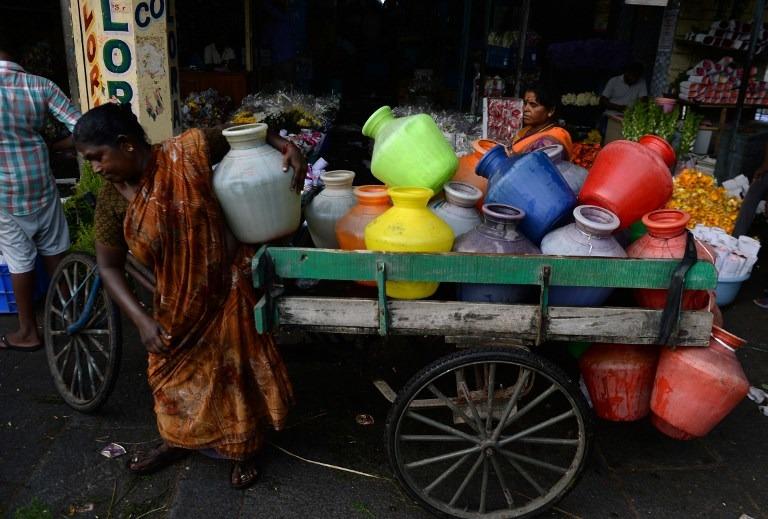 An women distributes water at a wholesale flower market during the Durga Puja festival in Chennai on Oct 16, 2018. (ARUN SANKAR / AFP)

CHENNAI, India — When the thousands of water lorry drivers who shore up parched Chennai's overtaxed water delivery system went on strike for three days last month, to protest a ruling restricting their access to groundwater, a water crisis ensued.

An estimated 163m people out of India's population of 1.3b - or more than one in 10 - lack access to clean water close to their home

Hotels and malls shut. Taps ran dry in residential districts of the city.

"A resident called and even threatened suicide if I didn't send a water tanker. Water is like that. We can't live without it," he told the Thomson Reuters Foundation.

India is suffering "the worst water crisis in its history", according to a June report by government policy think tank NITI Aayog.

Worsening water shortages - for farmers, households and industry - threaten the lives and incomes of hundreds of millions of Indians, and the economic growth of the country, the report said.

An estimated 163 million people out of India's population of 1.3 billion - or more than one in 10 - lack access to clean water close to their home, according to a 2018 report by WaterAid, an international water charity.

For Parthasarthy, that's a good business opportunity, and a chance to add to his fleet of 15 water trucks as the Tamil Nadu state government struggles to meet growing demand for clean water.

The port city of Chennai needs 800 million litres of water a day to meet demand for water, according to official data. At the moment, the government can provide only 675 million litres, according to the Chennai Metropolitan Water Supply and Sewerage Board.

Like many Indian cities, Chennai and its suburbs plug that gap by buying water, encouraging residents to dig backyard borewells, or using private wells.

In particular, Chennai depends on more than 4,000 private water tankers for its everyday water needs. The government also runs a "dial a tanker" service to meet demand.

According to the Chennai Private Water Tanker Lorry Association, which has more than 1,000 members, each tanker makes up to five trips a day, ferrying water from the outskirts of the city to apartments, hotels, malls and offices.

Altogether, the tankers deliver 200 million litres of water a day to Chennai, according to the association.

"There are neighbourhoods that depend on tankers throughout the year with no access to government water pipelines," said Shekhar Raghavan, director of the charity Rain Centre, which encourages rainwater harvesting and water conservation in urban areas.

That, he said, has "given rise to the water mafia, which has total control over who will get how much water in the city".

Tankers identify good groundwater sources in agricultural areas in neighbouring districts, pay a small fee to access the water and then sell if for 50 times that cost, Raghavan said.

But what Raghavan called "indiscriminate" - and in many cases unauthorised - extraction of groundwater is creating growing problems as supplies run short.

In 2014, a state government directive restricted use of such tanked-in water for commercial purposes, though implementation of the order was erratic.

Hundreds were fined - but the amount of water being delivered has continued to grow, by about 25 percent since 2014, the water lorry owners association estimates.

Drivers argue that they are providing a crucial public service and plugging leaks in government delivery mechanisms.

"Technically we are providing water free and helping people. We are quenching the city's thirst," Parthasarthy said.

That means "we only charge for transporting water," he said. 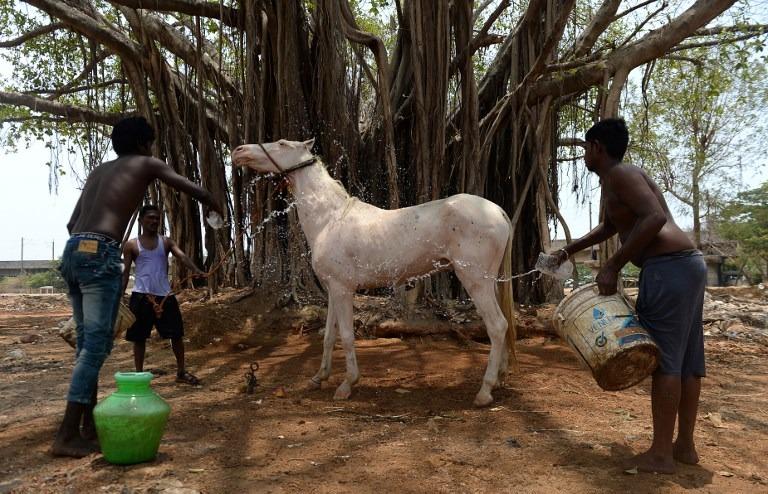 Indian men pours water over their horse to cool it down on a hot summer day in Chennai on May 3, 2018. (ARUN SANKAR / AFP)

But critics say the firms' use of rural water is depriving people in those areas of sufficient water - and that fast-depleting water supplies mean it's time to rethink how water is managed in Chennai.

Some residents say they are being held to ransom by private water distributors, as they have no option but to pay and no prospect of being hooked to government-run water supplies soon.

"We are totally dependent on water lorries and they are taking advantage of that fact," said Raman Duraiswamy, convener of the Sholinganallur constituency welfare association, an umbrella body that has 600 resident associations as members.

"We have paid a lot in taxes and for the last five years have been waiting for the government to deliver on their promise of providing us piped water."

Those restrictions cut off the companies' access to groundwater in areas identified as "critical" and "dark zones", where the water table is overused or very low.

The court found otherwise. In its decision, judges called groundwater the "backbone of India's drinking water and irrigation system" and ruled that companies extracting it for profit without permission were engaged in criminal "theft".

Overuse of rural groundwater was threatening food production and the country's food security, the court ruled.

The strongly worded order has stirred debate on the city's dependence on water tankers and packaged water - particularly as Chennai's government has yet to settle on alternatives.

R Neelakandan, a spokesman for the Chennai water board, said feasibility studies were underway on new water sources and a new desalination plant was in the pipeline. 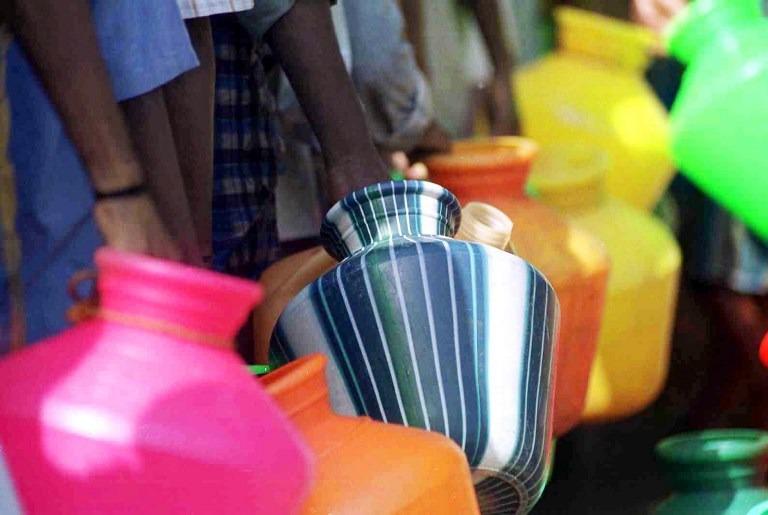 In this 24 June 2001, photo, residents queue with plastic containers to collect water from the tankers of the Metro Water Board in Chennai. (DIBYANGSHU SARKAR / AFP)

The plant would provide 150 million litres a day of water to Chennai and its suburbs, and is expected to be running in the next five years, he said.

But the alternatives "will take time and right now we are waiting for the (November) monsoon rains to fill up the dry lakes and ease the situation," he said in a telephone interview.

Raghavan, of the Rain Centre, which has spent two decades looking for alternative and sustainable water for Chennai, said getting water to those who need it will require better rainwater harvesting and storage, and renovation of wells - not just more delivery tankers.

"A common sense approach (is) required to avoid day zero," he said.

For now, for many residents, a good monsoon is all that stands between them and more water shortages ahead.

"The water crisis is worsening and even we are worried about depleting ground water," admitted Shakespeare Arulanandam, founder of the greater Tamil Nadu packaged drinking water manufacturers association, whose members filed the high court suit.

"In the future we can only pray more fervently and hope for good rains to ensure there is enough water to go around. It will be up to the Gods," he said.