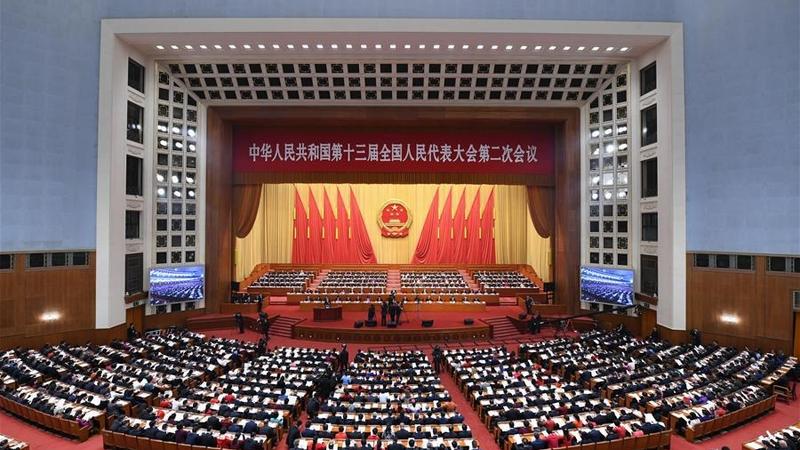 The second session of the 13th National People's Congress opens at the Great Hall of the People in Beijing, capital of China, March 5, 2019. (ZHANG LING / XINHUA)

BEIJING - China's top legislature underscored efforts to provide the country's high-quality development with the backing and support of high-quality legislation in 2019 in an annual work report.

The report of the Standing Committee of the National People's Congress (NPC), was delivered Friday by the committee's chairman Li Zhanshu at the second session of the 13th NPC.

The top legislature plans to move forward with formulating and revising urgently needed laws for deepening market-based reforms and expanding high-standard opening up, according to the report.

Under the plan is also revision of the Securities Law, the Law on Officers on Active Service, the Military Service Law, the Law on the People's Armed Police Force, the Organic Law of the NPC, and the NPC procedural rules.

Research will be conducted for the drafting of laws on bio-security and Yangtze River conservation, according to the report.

All these tasks need to be expedited so that they are completed on schedule, it reads.

Summing up its work over the past year, he said the top legislature has got off to a good start under the leadership of the Central Committee of the Communist Party of China with Comrade Xi Jinping at its core.

"The NPC Standing Committee made studying and implementing Xi Jinping Thought on Socialism with Chinese Characteristics for a New Era the foremost political task," Li said, noting that the move aims to ensure a correct political orientation in NPC work.

Li also highlighted the amended Constitution, saying new progress has been made in studying, publicizing, implementing, and enforcing the Constitution, thereby demonstrating its legal standing, authority, and efficacy.

He went on to underscore legislation guarantees for the country's reform, opening up, and stability.

Among them are the enactment of the E-commerce Law and the Law on the Prevention and Control of Soil Pollution, as well as the revision of the Company Law.

Li said the draft foreign investment law submitted to the on-going annual session for its third reading "is a full reflection of new ideas, approaches, and measures in reform and opening up, and will play an important role in lifting China toward a new stage of high-level opening up in the new era."