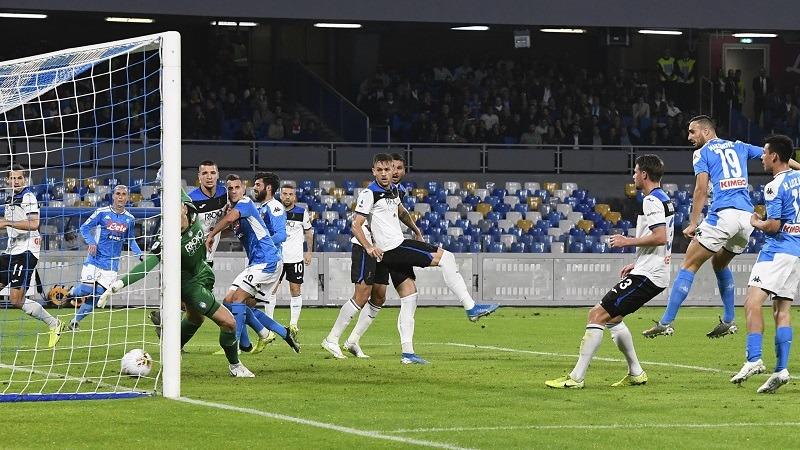 MILAN - Atalanta rallied to draw 2-2 at Napoli on Wednesday in an entertaining Serie A match between two of the league's most attack-minded sides.

Atalanta remained third but slipped five points behind Juventus, which moved back to the top of Serie A - a point above Inter Milan - after a stoppage-time penalty by Cristiano Ronaldo gave it a 2-1 win over Genoa.

Nikola Maksimovic and Arkadiusz Milik scored for Napoli, either side of Remo Freuler's equalizer.

As far as I'm concerned, you didn't even need VAR but it's ridiculous that the referee didn't go to see the replay

But Josip Ilicic leveled for Atalanta four minutes from time, with Napoli coach Carlo Ancelotti and an assistant then sent to the stands for their protests as they felt there should have been a penalty moments earlier when Fernando Llorente appeared to be elbowed over by Simon Kjær.

"For the first time I don't want to talk much tonight. I feel offended as a professional and I'm disappointed," Ancelotti said. "The defender doesn't even look at the ball and goes straight for Llorente to try and stop him from jumping. It was a clear penalty. They made a dreadful mistake.

"As far as I'm concerned, you didn't even need VAR but it's ridiculous that the referee didn't go to see the replay ... I don't want to say anything else because I wasn't shown respect and nor was my club."

Milik also twice hit the woodwork for Napoli before finally getting his goal.

Napoli remained three points behind Atalanta but fell to sixth.

Ronaldo had a goal disallowed in stoppage time but then won and converted a penalty to seal the victory against Genoa, which played nearly all of the second half with 10 men. 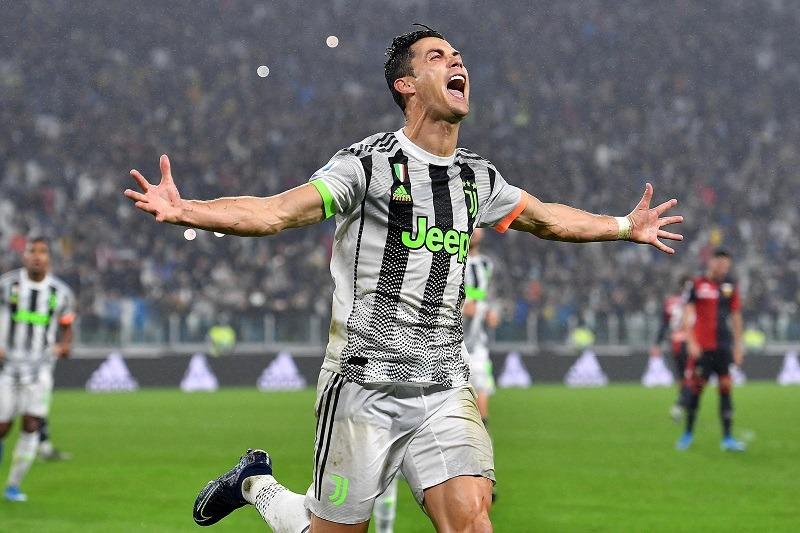 Juventus' Cristiano Ronaldo celebrates after scoring during the Italian Serie A soccer match between Juventus and Genoa at the Allianz stadium in Turin, Italy, Oct 30, 2019. (ALESSANDRO DI MARCO / ANSA VIA AP)

"We believed in it and tried right until the end," Ronaldo said. "We created many opportunities, we wanted to win and with each passing minute the tension increased. We knew that Inter had won yesterday and we were second and this was one an added stimulus."

Maurizio Sarri's men were looking to bounce back from a disappointing 1-1 draw at Lecce at the weekend and Leonardo Bonucci headed them in front in the 36th.

But Christian Kouame leveled five minutes later with a bit of luck as he miskicked the ball off his other leg and it wrongfooted Juventus goalkeeper Gianluigi Buffon.

Francesco Cassata was sent off for a second yellow card five minutes after the interval but Genoa's chances to hold on were boosted when Juventus substitute Adrien Rabiot was also dismissed for two bookings three minutes from time.

Ronaldo, who had earlier missed a sitter, thought he had won the match in the fourth minute of stoppage time but the goal was disallowed for offside.

The Portugal international was given a second chance minutes later when he was tripped by Antonio Sanabria and he drove the penalty into the bottom left corner. 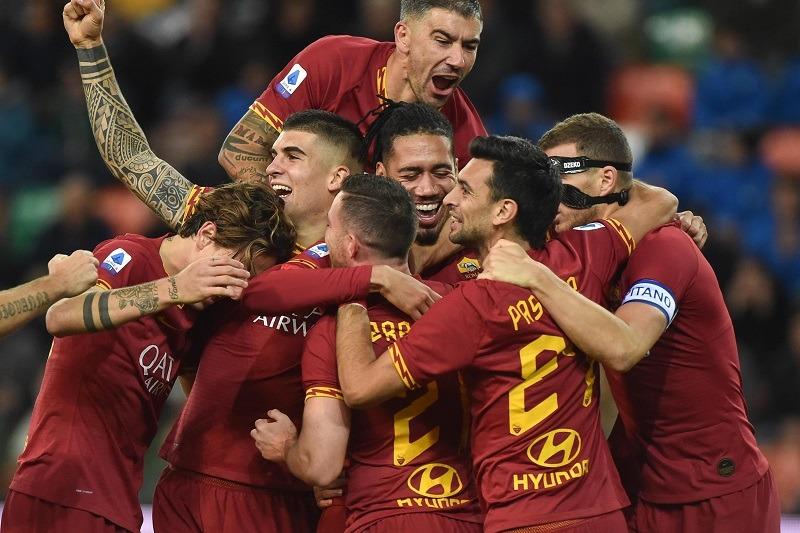 Roma's Christopher Lloyd Smalling, center, celebrates with his teammates after scoring during the Italian Serie A soccer match Udinese Calcio vs AS Roma at the Friuli-Dacia Arena stadium in Udine, Italy, Oct 30, 2019. (FRANCO DEBERNARDI / ANSA VIA AP)

Roma defender Federico Fazio was sent off after just 32 minutes but the capital side managed to win 4-0 at Udinese to move fourth.

Lazio is a point further back after beating Torino by the same scoreline.