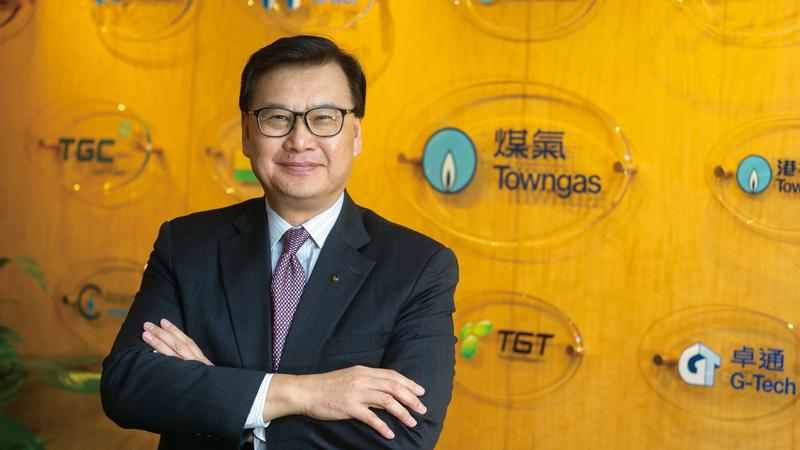 Back in 1864, coal gas was introduced in Hong Kong for the first time. The gas pipeline then was only 24 kilometers long, providing fuel to 500 gas lamps along Queen’s Road and certain buildings.

From then on, Hong Kong and China Gas Co Ltd (Towngas), the first and sole piped-gas supplier in the city, gradually began providing gas to every home and building.

Towngas, founded in 1862, now provides gas for 85 percent of households as well as Hong Kong’s industrial and commercial sectors.

“As a public utility, we are quite closely linked to society. It is essential for us to be immersed in the culture,” said Alfred Chan Wing-kin, managing director of Towngas and chairman of Towngas China.

In Hong Kong, gas is produced at two production plants located at Tai Po and Ma Tau Kok. The maximum supply capacity of the two plants is around 12.6 million cubic meters a day.

Every employee’s attitude to change is a key. We encouraged them to consider one thing every day — how to do better tomorrow?

Coal was originally the main source of the gas. But with the rise of clean energy, the supplier changed the material to heavy oil, and then to naphtha and natural gas.

Today, natural gas is being used for electricity generation and production of piped gas in Hong Kong. As hydrogen occupies almost half of the gas and carbon monoxide only accounts for as much as 3.1 percent, Chan believed the gas is safe and environmental-friendly enough.

“With about half the density of air, it rises and will dissipate in the air if leakages occur,” he said.

It is not in Towngas’ plan to promote natural gas for direct use in Hong Kong, as conditions here are quite different than they are on the Chinese mainland.

Gas for industrial and commercial use accounts for 75 percent on the mainland, compared with only 40 percent in Hong Kong. The company has more residential customers in the city.

It means that changing into natural gas is not able to increase gas sales in Hong Kong. Thus, the overall economic value of using natural gas directly is not high, he explained.

“If we have to do that, we need to change gas pipes in a building within a day and alter the current 4 million gas cookers,” Chan added.

However, the trend of “changing from coal to natural gas” will continue on the mainland, which could help maintain Towngas’ natural gas sales growth there.

Towngas’ annual report reveals its profit attributable to shareholders last year came to HK$9.31 billion (US$1.19 billion), up 13.2 percent from the year before. Revenue rose 20.3 percent to HK$39.07 million due to a 1.7-percent rise in gas sales volume in Hong Kong and an 18-percent gas sales growth on the mainland.

Starting with the sale of bottled gas, Towngas opened the gate to the vast mainland market with a joint venture in Panyu, Guangdong province, 25 years ago.

When electricity suppliers CLP Holdings and Power Assets Holdings spread their wings in overseas markets through acquisitions, Towngas broke a different path for itself — making big strides on the mainland.

It happened to ride on mainland’s reform and opening-up of the 1990s. Since there were no big problems working with government departments in terms of laws, regulations and standards, the mainland foray went smoothly.

“Every company has its own development path with distinct focus and advantage. It is hard to tell which is better,” Chan said.

There is no doubt that Towngas did make a best choice for itself. As of the end of last year, it owned 131 city-gas projects spread across 23 provincial-level regions.

Meanwhile, the gas supplier is striving to diversify its business on the mainland, with 254 projects covering water sectors, energy applications, exploration and utilization of new energy, as well as telecommunications.

With the release in February of a development blueprint for the Guangdong-Hong Kong-Macao Greater Bay Area, the company expects tremendous potential for bringing new projects online in the area, where they currently already have more than 20 joint venture projects.

“Last year, we just invested in Foshan Water Environmental Protection Co Ltd, the first water services project in the Bay Area. In the coming two to three years, we will make significant investments for its expansion and build it into a waste disposal factory,” Chan said.

In Shenzhen, other than the original cooperation with Shenzhen Gas Corp, Towngas now has two telecommunication projects and one payment technology project.

“The telecommunication sector is profitable, including the projects in Hong Kong and Dongguan. The one in Shenzhen is just a start, and we don’t expect it to make money in the first five years,” Chan said.

When Alfred Chan Wing-kin was in his early 40s, he got an invitation from public utility Hong Kong and China Gas Co Ltd (Towngas) to lead the department of marketing and customer services.

He turned down the offer at first. His professional background, in engineering projects and manufacturing, had nothing to do with public utilities or marketing.

“But at that stage, things might never have changed in my life if I had maintained the status quo,” Chan said.

So he took up the gauntlet after receiving the invitation again and started to break new ground for Towngas.

In 1990s, electrical appliances such as microwave ovens, induction cookers and electric kettles were becoming more and more popular in daily life. It seemed as though the golden era for the gas company, with rapid development and user growth, was about to end soon.

As the company’s first head of marketing, Chan was entrusted with a mission at this critical moment — to find a way out of the competition with electricity suppliers.

He delivered his first outcome with the sales volume of the Superbowl — the tabletop gas cooker with a built-in rice cooking pot in the middle.

The multifunction product could cook dishes and rice at the same time, and did not cost much more than other gas cookers. Backed by these selling points, 25,000 Superbowls were sold in a year. By using that, a household’s gas consumption increase 8 percent, which is optimistic for the company.

Soon after that, Chan accepted another challenging task, as Towngas introduced to the city a gas-powered clothes dryer from Japan. Before the promotion, Chan took advantage of his profession in manufacturing and spent a half-year on product endurance tests. Using his suggestions on material, production and installation, Towngas reduced some costs.

Given the fact that Hong Kong residents were used to drying clothes in the sun, promoting the clothes dryer was quite challenging at first. But because the dryer provided a much quicker and cleaner way to dry clothes that were soft to wear, its sales volume was good. It sold 20,000 one year in a good season and helped raise household gas consumption by 33 percent.

His unremitting efforts saw him rise through the ranks to become managing director in 1997.

Overseeing the company’s business from the perspective of management, Chan saw changes are essential for Towngas’ continuous prosperity.

“As a public utility, we hope the company presents an image of stability rather than obsolescence,” he said.

The public utility’s business is always regarded as inflexible, as their working method has been the same for a long time and will continue in the longer term.

But Chan believed various improvements could be done during the immutable working process, such as how to make products look better, how to install gas in a more convenient way, and how to improve customer services.

“Every employee’s attitude to change is a key. We encouraged them to consider one thing every day — how to do better tomorrow?” Chan said.

When people on the field are introduced a new working tool, usually they will resist at the beginning. At such a time, Chan and his colleagues will visit the worksite and encourage employees to try it once.

The leverage effect of these innovative tools is quite significant. With these tools, plus a humanized checking system, workers can go directly to a construction site, boosting efficiency.