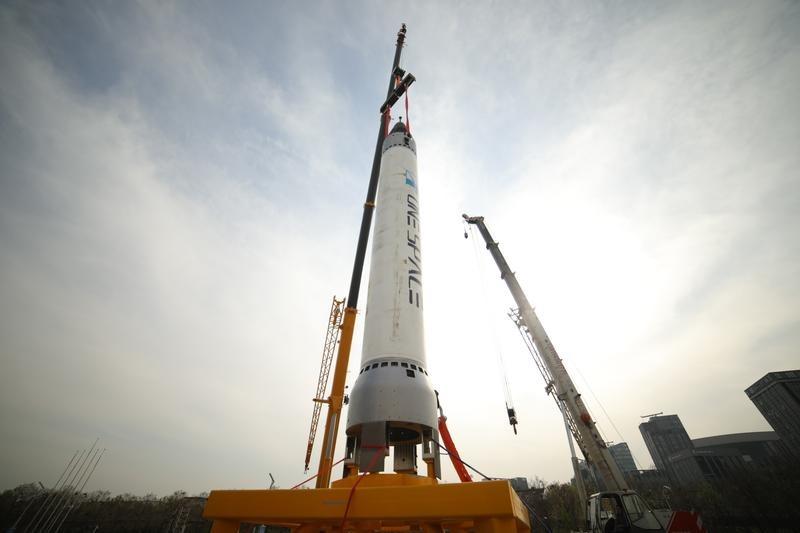 The "Chongqing Liangjiang Star" rocket was assembled in Beijing April in 2018. The China Academy of Launch Vehicle Technology is known as a prestigious developer of carrier rockets, but in the near future, it may acquire a new tag: China's first space tourism provider. (PHOTO / CHINA DAILY)

The China Academy of Launch Vehicle Technology is known as a prestigious developer of carrier rockets, but in the near future, it may acquire a new tag: China's first space tourism provider.

Engineers at the academy in Beijing's southern outskirts are designing a new spacecraft to send anyone willing to pay US$200,000 to US$250,000 on a suborbital journey, according to the academy

Engineers at the academy in Beijing's southern outskirts are designing a new spacecraft to send anyone willing to pay US$200,000 to US$250,000 on a suborbital journey to get a magnificent view of the stars and experience weightlessness, according to the academy, part of China Aerospace Science and Technology Corp and the country's largest rocket maker.

According to the plans, the reusable spacecraft, expected to enter service around 2028, will look like a fixed-wing aircraft without a vertical stabilizer－the upright fin at the tail－and be propelled by a rocket engine. It will blast off vertically like a typical carrier rocket but make a horizontal landing on a runway like an ordinary plane, according to the academy.

It will operate in accordance with preset programs, with no pilot or controllers inside the spacecraft.

Passengers would stay there for over 10 minutes of sightseeing during the half-hour flight, according to the academy. They could see distant stars and Earth's contours through the windows, experience moments of weightlessness like astronauts, and perhaps even carry out scientific experiments.

Zhao Jianbo, an engineer in charge of the program, said participants would need to undergo training sessions for several weeks at Chinese space establishments to get ready for the effects of gravitational acceleration and weightlessness.

"They will not need to wear spacesuits during the journey because there will be oxygen and life-support instruments inside the spacecraft," he said.

Project manager Han Pengxin said the spacecraft will be safe and reliable since it will employ the academy's cutting-edge technologies.

Passengers would have to be between ages 18 and 65 and have neither heart disease nor hypertension, he said.

Cai Qiaoyan, a senior researcher of reusable spacecraft at the academy, said maintaining the space tourism spacecraft would be easy, so it could be used for frequent flights.

Globally, seven people have rocketed into space at their own expense. The trips were arranged by Space Adventures, a space tourism company in the US state of Virginia, and the tourists were passengers aboard Russian carrier rockets and spacecraft.

Dennis Tito, an engineer and multimillionaire from the US, was the world's first space tourist.

Together with two Russian cosmonauts, Tito joined the Russian Soyuz TM-32 mission on April 28, 2001, and spent nearly eight days in space, orbiting Earth 128 times after receiving extensive training in Russia and reportedly paying US$20 million for his journey. He also was the first self-financed visitor to the International Space Station.

In addition to the Chinese academy, several foreign space firms like the US' Blue Origin as well as Virgin Galactic of the United Kingdom have been developing reusable spacecraft for suborbital tourism, which has yet to become a reality.