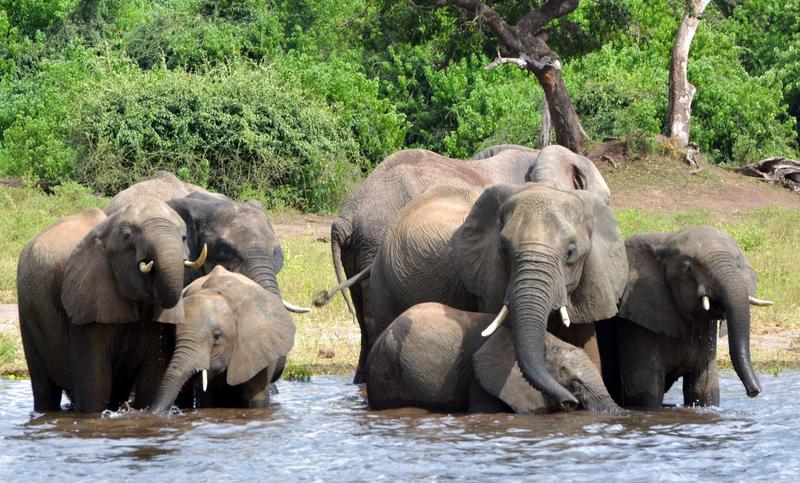 JOHANNESBURG — Botswana, long viewed as a rare refuge for African elephants, is coming under increasing threat from poachers.

Poachers are killing elephants in the southern African country in growing numbers after wiping out large numbers of elephants in nearby Zambia and Angola, a conservation group said.

Some carcasses counted by Elephants Without Borders "were not poached but rather died from natural causes and retaliatory killings as a result of human and wildlife conflicts," the government said.

The Elephants Without Borders group and wildlife officials in Botswana have conducted half of a national elephant census and so far have counted nearly 90 "fresh and recent" carcasses of poached elephants, group director Mike Chase said in an email.

A similar census in 2014 found just nine carcasses, according to Chase. Botswana has an estimated 130,000 elephants, the most of any country in Africa.
ALSO READ: China's conservation efforts hailed at African Ranger Awards

Botswana's government said Tuesday that there had been inaccurate reporting on elephant poaching. Some carcasses counted by Elephants Without Borders "were not poached but rather died from natural causes and retaliatory killings as a result of human and wildlife conflicts," the government said.

The reported increase in elephant poaching in Botswana could reflect a trend in which poachers move into new territories as conditions become more difficult in regions where they usually operate.

Those conditions could include a dearth of elephants to kill after widespread poaching, or crackdowns on trafficking syndicates in some cases.

Tanzania's Selous region, for example, was heavily hit by elephant poachers but recent data indicates that the killing has slowed. Even so, killings intensified around the same time in Mozambique's Niassa reserve to the south, which is linked to the Selous by a wildlife corridor.

The fight against elephant poaching has made some gains, including a ban on the ivory trade in China, the world's biggest consumer. But experts say the rate of annual elephant losses still exceeds the birth rate, and the encroachment of human settlements is reducing the animals' range.

Botswana, with a population of just over 2 million people, suffers some human-wildlife conflict but has more space than many other countries for animals to roam. Kenya, for example, has a population 25 times larger and is almost as big as Botswana in geographical size.

Botswana's security forces have also had a reputation — and faced criticism from neighboring countries — for allegedly being quick to open fire on suspected poachers, including Namibians and Zimbabweans who were killed after illegally crossing the border.

President Mokgweetsi Masisi, who took office in Botswana this year, has taken steps to reduce the use of military weapons in operations against poachers, according to local media reports.

While the move may have alleviated tension with Botswana's neighbors, some conservationists speculate it could be providing an opening to emboldened ivory traffickers.

Poachers have targeted old bull elephants that presumably have the heaviest tusks, killing them when they go to drink at seasonal water sources, Chase said.

"A clear order has been put out for tusks of a specific weight, and I suspect such large ivory is in heavy demand, considering that there are few large tuskers left in Africa," he said.