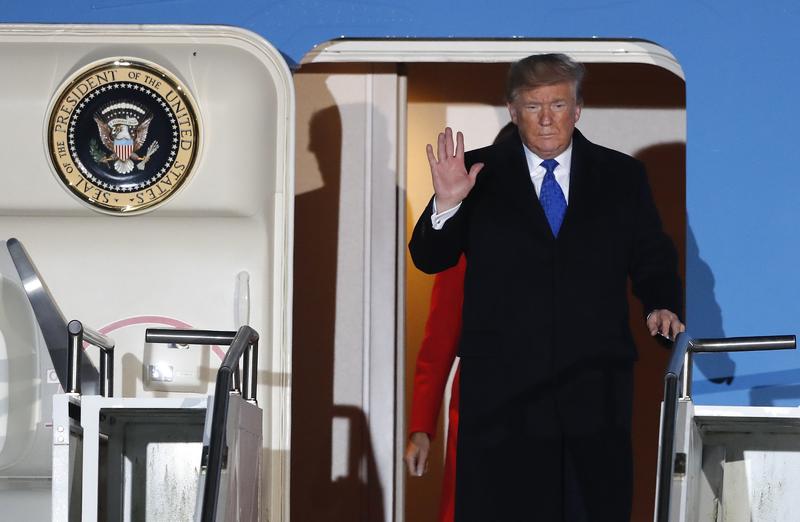 LONDON — Crying foul over timing, President Donald Trump on Monday accused Democrats of scheduling this week’s impeachment hearing to undercut him during his trip abroad for a NATO leaders’ meeting playing out at a crucial moment for the 70-year-old military alliance.

Trump, who arrived in London late Monday for two days of meetings, called the trip “one of the most important journeys that we make as president” before departing Washington and noted Democrats had long known about the meeting.

The president lashed out at Democrats again soon after arriving in the UK. He said on Twitter that he had read the Republican report designed to counter Democrats’ impeachment case on his flight. The report, which was obtained by The Associated Press, called Trump’s hesitation to provide military aid to Ukraine “entirely prudent.”

“Prior to landing I read the Republicans Report on the Impeachment Hoax. Great job! Radical Left has NO CASE. Read the Transcripts,” Trump wrote on Twitter. “Shouldn’t even be allowed. Can we go to Supreme Court to stop?”

It was not immediately clear under what legal grounds Trump was calling for the high court’s involvement.

Trump’s trip comes amid ongoing quarrels over defense spending by NATO allies and widespread anxiety over the president’s commitment to the alliance.

The president said his trip would be focused on “fighting for the American people.” But in the more than two months that the impeachment inquiry has been underway, he has constantly drifted back to what he frames as the Democrats’ unfair effort to overturn the results of his 2016 election.

The House Judiciary Committee is scheduled to hold a hearing Wednesday on the constitutional grounds for impeachment before Trump wraps up at the NATO meeting.

Trump insists he’s solely focused on scoring domestic and foreign policy wins, including revamping NATO so that allies spend more on defense. But he’s often appeared consumed by the day-to-day battle against impeachment.

In recent days he’s repeatedly lashed out about the “impeachment hoax” and the “scam” inquiry, even delving into impeachment at a ceremony to celebrate NCAA athletes and at last week’s annual Turkey pardon.

White House aides say the summit offers Trump an opportunity to counter the impeachment narrative in Washington and demonstrate to voters that he’s keeping a business-as-usual approach while Democrats concentrate on the probe.

But soon after Air Force One departed, Trump took to Twitter to slam “Do Nothing Democrats” for scheduling the hearing during the NATO meeting as “Not nice!””

House Speaker Nancy Pelosi, in Madrid for a UN conference on climate change, declined to comment about the impeachment inquiry, saying, “When we travel abroad, we don't talk about the president in a negative way. We save that for home.”

Trump is only the fourth US president in history to face an impeachment inquiry. The gravity of impeachment is likely to play into the calculus of how other global leaders engage the president going forward, in the view of some analysts.

“In one sense impeachment is weakening his hand diplomatically,” said Ted Galen Carpenter, a senior fellow for defense and foreign policy studies at the Cato Institute in Washington. “For a normal president, it would be seen as a substantial problem. For Donald Trump, he’s going to try to blow right through it and act is if that’s not a relevant factor.”

The NATO leaders meeting is a complicated backdrop for Trump to make his first extended overseas visit —he made a quick Thanksgiving visit to US troops in Afghanistan — since Democrats launched the impeachment inquiry.

Trump has repeatedly criticized fellow NATO members and complained that too few nations are on track to meet the alliance goal of spending at least 2% of GDP on defense by 2024. French President Emmanuel Macron recently lamented that a lack of US leadership was causing the “brain death” of the alliance.

Trump’s former national security adviser John Bolton has said the president could move to leave the alliance if he wins reelection.

Democratic presidential candidate Joe Biden, who has warned that a second Trump term could mean NATO's effective dissolution, jokingly said Monday that he'd "say a prayer" as the president heads to London.

"There's time for redemption," Biden told reporters as he campaigned in Emmetsburg, Iowa. "But so far he's treated NATO like it's a protection racket."

In the leadup to the summit, White House aides sought to soften Trump’s past criticism of member nations as deadbeats.

White House officials noted that before Trump took office only four NATO members had reached the 2% benchmark that was set in 2014. Now there are nine countries that have reached the threshold, according to the White House. Eighteen of the 29 members of the alliance are projected to meet the 2% threshold by 2024.

Trump isn’t the first US president to attend a NATO summit with impeachment looming.

In June 1974, Nixon faced criticism when he headed to Brussels as NATO commemorated its 25th anniversary. He met with fellow alliance leaders and tried to convey a message that he remained fully in power even as the Watergate investigation gained steam. By summer’s end, Nixon resigned.

In contrast, Trump heads to NATO confident that there aren’t the votes needed in the Republican-controlled Senate to convict him should the House vote to impeach him. Even so, he still might not be able to resist throwing attention back to the impeachment inquiry in Washington.

“While Nixon remained determined to rise above the swirl of impeachment and pretend he wasn’t distracted, Trump can’t help himself,” said Derek Chollet, executive vice-president for security and defense policy at the German Marshall Fund of the United States. “Moreover, for Trump, being in charge hardly means projecting steady confidence – it means proving that he can keep everyone off-balance and nervous about what’s coming next.”