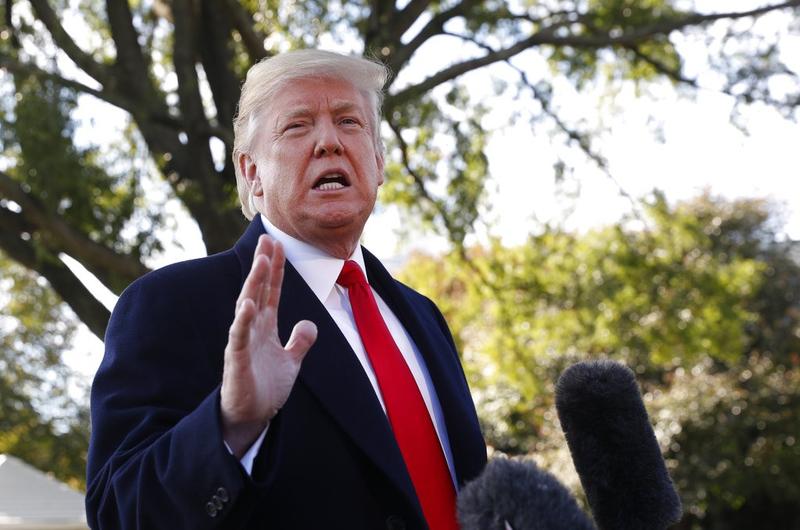 President Donald Trump stops to talk to members of the media before walking across the South Lawn of the White House in Washington, Oct 22, 2018, to board Marine One helicopter for a short trip to Andrews Air Force Base, Md., en route to Houston. (PABLO MARTINEZ MONSIVAIS / AP)

WASHINGTON/TAPACHULA - President Donald Trump on Monday vowed to begin curtailing millions of dollars in American aid to three Central American nations and called a caravan of migrants bound for the United States a national emergency, as he sought to boost his party's chances in Nov 6 congressional elections.

We will now begin cutting off, or substantially reducing, the massive foreign aid routinely given to them

"Guatemala, Honduras and El Salvador were not able to do the job of stopping people from leaving their country and coming illegally to the US. We will now begin cutting off, or substantially reducing, the massive foreign aid routinely given to them," Trump wrote in a series of Twitter posts.

The caravan, an estimated 7,000 to 10,000 Central Americans fleeing violence and poverty in their homelands, is in southern Mexico, inching toward the distant US border.

Trump and his fellow Republicans have sought to make the caravan and immigration campaign issues ahead of the midterm elections, in which his party is fighting to maintain control of the US Senate and House of Representatives.

Trump's remarks also seemed aimed at piling pressure on Mexico to stop the caravan, something that he complained the Mexican police and military had failed to do.

Mexico, which has refused Trump's demands that it pay for a border wall between the countries, tries to walk a fine line between showing solidarity with the Central American migrants and responding to Washington's demands to control its borders.

The caravan was moving north again on Monday as migrants left the southern Mexican city of Tapachula near the Guatemalan border, bound for the town of Huixtla, also in Chiapas state. 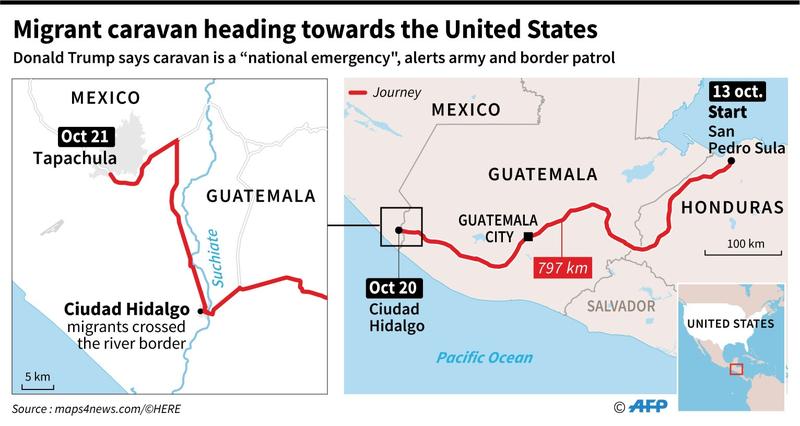 This AFP graphic shows the projected route of the caravan of migrants which is heading towards the United States.

Some shielded themselves from the midday sun with umbrellas, others with bits of cardboard on which they had slept the previous night. As they left the city and crossed a highway, Mexican drivers honked their horns in support.

US administrations have long seen aid programs as an essential part of efforts to stabilize the countries of Central America and stem the flow of migrants leaving.

But since Trump became president last year, the US has already moved to sharply decrease aid to the region. 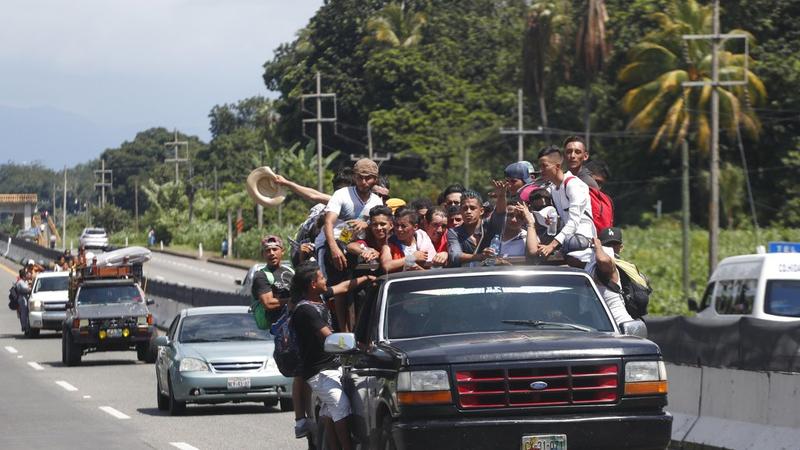 Central American migrants making their way to the U.S. in a large caravan fill the truck of a driver who offered them the free ride, as they arrive to Tapachula, Mexico, Oct 21, 2018. Despite Mexican efforts to stop them at the Guatemala-Mexico border, about 5,000 Central American migrants resumed their advance toward the US border Sunday in southern Mexico. (MOISES CASTILLO / AP)

Later on Monday, Trump headed to Texas, a key border state, to campaign for Republican US Senator Ted Cruz, who is seeking re-election.

Speaking to reporters, Trump stepped up his criticism, saying that despite getting a "tremendous amount of money" in US foreign aid, Guatemala, Honduras and El Salvador "like a lot of others, do nothing for our country."

Trump also said, without providing evidence, that "Criminals and unknown Middle Easterners" are mixed in with the caravan, a claim immigration advocates disputed.

'Power of the purse'

Democratic Representative Nita Lowey said Trump's threat to cut foreign aid "ignores that Congress, not the president, is entrusted by the Constitution with the power of the purse." Lowey said Congress provides assistance to Central American countries to address the root causes of why people want to leave in the first place.

"Cutting funding would make the problem worse, not better," Lowey added in a statement.

The migrants - men, women and children - have defied threats by Trump that he will close the US-Mexico border, as well as Mexican government warnings.

Argelia Ramirez, a spokeswoman for the caravan, said there were about 10,000 people in the group and that around 6,000 of them would seek to remain in Mexico. UN spokesman Farhan Haq estimated the caravan includes more than 7,000 people.

"Donald Trump can say what he wants. At the end of the day, he knows he's not the king of the world," Ramirez told Reuters. "We're fighting for a cause, and I think God will end up moving the hearts of all the American people."

The caravan is still a long way - more than 1,100 miles - from the US border. Mexico hopes to disperse the convoy long before it can reach the border using bureaucratic procedures, telling migrants to register with authorities in order to submit applications for asylum in Mexico.

That process can last weeks, and migrants are supposed to stay where they register while applications are processed. If they violate those rules, they face deportation.

Mexican Interior Minister Alfonso Navarrete told a media briefing on Monday that 1,128 Hondurans had sought refugee status in Mexico. He said 82,166 migrants from Honduras, Guatemala and El Salvador had been returned to their homelands in 2018.

He did not give a clear answer when asked if federal police would accompany the migrants to the U.S. border or stop them. Officers had instructions to keep watch over the caravan and help the national migration agency, Navarrete said. He did not provide further details of how the police would be deployed.

Separately, Mexican President Enrique Pena Nieto told a business summit that those in the caravan who did not follow the rules were unlikely to be able to remain in Mexico or reach the United States.

A spokesman for the president's office in El Salvador, Roberto Lorenzana, said the country had slashed migration to the United States by 60 percent over the past few years, a feat its Central American neighbors had not matched.

In Guatemala, a border crossing with Mexico and another with Honduras have been closed indefinitely, said Alejandra Mena, a spokeswoman for that country's migration agency.

Army Lieutenant Colonel Jamie Davis, a Pentagon spokesman, said that while National Guard troops are currently supporting the Department of Homeland Security on the border, the Pentagon had not been asked to provide additional support. There are currently 2,100 National Guard troops along the border in Texas, New Mexico, Arizona and California, according to the Pentagon.