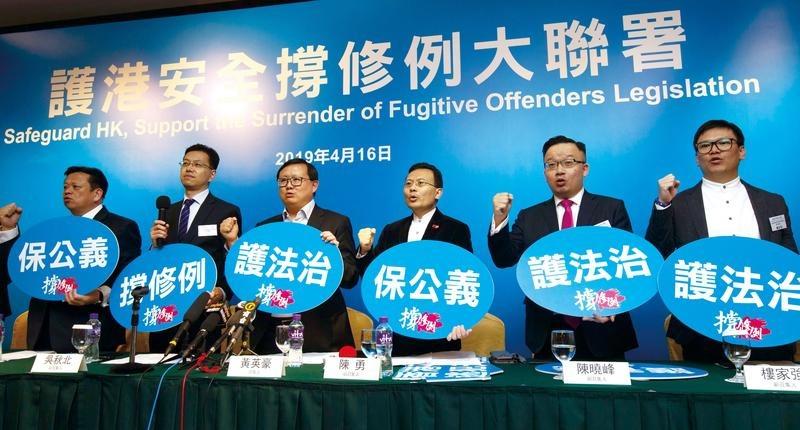 The proposed amendments to Hong Kong’s extradition laws have received more backing from wide sectors of the local community – days ahead of further deliberations by legislators on theissue.

The proposed changes to the Fugitive Offenders Ordinance had also drawn more than 111,000 people pledging support in an online signature petition by Saturday.

A Legislative Council’s bills committee is set to scrutinize the amendments Tuesday. The changes, once approved, are set to plug legal loopholes by allowing the special administrative region to transfer fugitives, on a case-by-case basis, to other jurisdictions that don’t have such an arrangement with the SAR at present.

Eddy Li Sau-hung, president of the Hong Kong Economic and Trade Association, said law-abiding businessmen have nothing to fear as the new law is aimed at protecting the interests of most Hong Kong people, including the business sector.

Pledging his support, Willy Fu Kin-chi, deputy secretary-general of the Hong Kong Legal Exchange Foundation, noted that as the SAR has no fugitive transfer arrangements with many jurisdictions currently, the amendments will lay out the legal grounds for handling such issues with them, and that will be beneficial for combating cross-border crimes.

To date, Hong Kong has fugitive transfer agreements with 20 other jurisdictions, but there’s still no such arrangement between the HKSAR and places like the Chinese mainland, the Macao SAR and Taiwan although China resumed the exercise of sovereignty over Hong Kong.

Kennedy Wong Ying-ho, a member of the National Committee of the Chinese People’s Political Consultative Conference — the nation’s top political advisory body, described the amendments as “critical” for Hong Kong in maintaining its reputation as an international city.

He said it would be absurd for Hong Kong to allow itself to be used as a safe haven by suspects to hide from their crimes committed elsewhere.

Wong, who’s also a lawyer, reckoned that the issue is being politicized.

To allay public worries, the government released an animated video on Friday, explaining nine frequently asked questions about the proposed amendments. They include queries on whether the general public would be affected, and why the changes are necessary.

Critics have disapproved of the amendments, including former Hong Kong governor Chris Patten, who claimed that the move has undermined the city’s rule of law and “one country, two systems”.

But, Patten’s remarks were refuted by the city’s political heavyweights and legal experts.

Former Secretary for Justice Elsie Leung Oi-sie believed that Patten has been using Hong Kong to attack the country politically.

Tam Yiu-chung, Hong Kong’s sole deputy on the National People’s Congress Standing Committee, questioned Patten’s accusations, saying they were made out of ignorance of the amendments.

He said the amendments have made it clear under what circumstances fugitives would be surrendered to other jurisdictions, and that the court would have the final say on the matter.

Tam said he could not understand how this would affect Hong Kong’s rule of law, adding that the changes would only

make Hong Kong safer by stopping it from being used as a safe haven by criminal suspects.