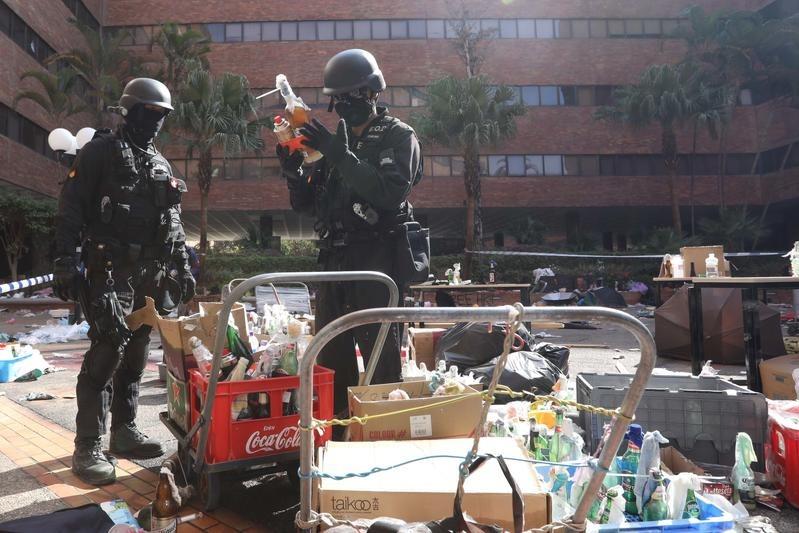 Officers of the Explosive Ordnance Disposal search for hazardous items at an outdoor area of the Hong Kong Polytechnic University (PolyU) on Nov 28, 2019. (PHOTO / CHINA DAILY)

HONG KONG - Hong Kong police said Thursday night that they have seized 3,801 petrol bombs and many other dangerous items and offensive weapons on the campus the Hong Kong Polytechnic University (PolyU).

At a media briefing about the operation of the safety teams deployed to the PolyU on Thursday, Assistant Commissioner of Police (Operations) Chow Yat-ming said officers from the police and fire services departments were split up into different groups and systematically entered into different buildings on the campus to remove and handle all dangerous items and offensive weapons, as well as to gather evidence at the scene.

Officers from the fire services department also found a large quantity of dangerous chemicals, including a large amount of petrol bombs, LPG hydrogen, over 550 liters of flammable liquid, 20 liters of corrosive fluid, and 80 liters of toxic substances

After more than 10 days of occupation by radicals, the campus has been badly and extensively damaged, with a large number of petrol bombs, gas cylinders and corrosives exposed under the sun light for a long time, which posed a serious threat to all personnel at the scene, Chow said.

According to Senior Superintendent Li Kwai-wah of the Organized Crime and Triad Bureau, the team seized 3,801 petrol bombs, including 100 tied with cassette gas bottles to make greater damage in Thursday's operation.

The team also seized 921 cassette gas cylinders, 558 bottles of different kinds of chemicals, including strong acid, strong alkali, corrosive liquids and chemicals that can be used to make explosives.

As for offensive weapons, police seized a number of bows, about 200 arrows, one air rifle and four boxes of nails that were extensively used in the vicinity of the PolyU.

At the university's car park, police found the fuel tanks of 44 vehicles damaged by radicals, who had done so to steal petrol and make petrol bombs, and several other vehicles maliciously vandalized.

Deputy Chief Fire Officer (Licensing & Certification) Wong Chun-yip said that as of 9 pm, officers from the fire services department have inspected the podium, laboratories, all the dangerous goods stores and most buildings on the campus.

During the inspections, they found a large quantity of dangerous chemicals, including a large amount of petrol bombs, LPG hydrogen, over 550 liters of flammable liquid, 20 liters of corrosive fluid, and 80 liters of toxic substances.

They also found that the university's laboratories had been broken in and vandalized and a total of 15 fire extinguishers outside the dangerous goods stores were missing.

The operation will resume on Friday morning as there are still some work to be done by police and fire services officers during the daytime, Chow said, adding that the team is expected to finish their tasks on Friday.

READ MORE: Police to lift PolyU siege by Friday at the earliest

"I'm confident that we can finish it by tomorrow and return a safe campus to the university management," he said.