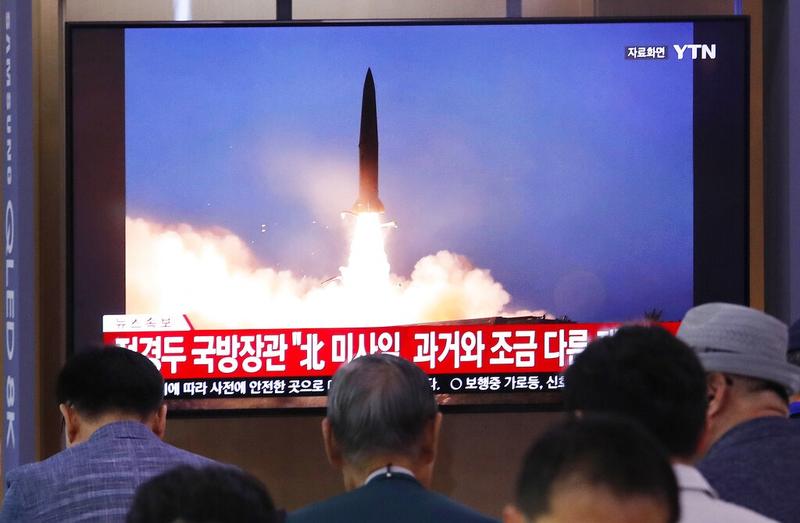 People watch a TV showing a file image of the Democratic People's Republic of Korea's missile launch during a news program at the Seoul Railway Station in Seoul, the Republic of Korea, July 31, 2019. (AHN YOUNG-JOON / AP)

SEOUL/BANGKOK/TOKYO — The Republic of Korea (ROK) said Wednesday the Democratic People's Republic of Korea (DPRK) fired two short-range ballistic missiles off its east coast, as Japan and the United States sought to keep lines of communication with the DPRK open.

ROK’s Joint Chiefs of Staff (JCS) said the two missiles were launched at 5:06 am and 5:27 am local time each near DPRK's eastern city of Wonsan, traveling about 250 km at an altitude of some 30 km.

"North Korea's actions do not help ease military tensions, nor do they help keep the momentum for talks that are under way," ROK Foreign Minister Kang Kyung-wha told reporters, Reuters reports. She urged the DPRK to halt the missile launches.

The DPRK is also referred to North Korea.

Later in the day, the National Security Council (NSC) standing committee of the Blue House expressed strong concern about the DPRK's launch.

The committee said DPRK's missile firings could have a negative effect on efforts to build peace on the Korean Peninsula, instructing the military to closely monitor relevant situations and thoroughly maintain defense posture.

The committee members vowed to continue diplomatic efforts for the resumption of negotiations to denuclearize the peninsula.

The DPRK's new move came less than a week after the country's launch of two short-range ballistic missiles that were fired near the same Wonsan area.

A ROK defense official said initial estimates showed the missiles, dubbed the KN-23s, fired on Wednesday could be similar to those last week, although they were still working to confirm details, reports Reuters.

ROK defense minister Jeong Kyeong-doo told a defense forum in Seoul that stopping a missile like the KN-23 would be difficult, although ROK's missile defense systems would be able to detect and intercept them.

ROK's defense ministry also told lawmakers in Seoul it had concluded that a new submarine the DPRK showcased last week was capable of carrying up to three ballistic missiles.

Following the latest DPRK’s move, US Secretary of State Mike Pompeo said in Bangkok he's very hopeful for a quick resumption in nuclear talks with the DPRK despite DPRK’s recent weapons tests that have clouded already uncertain prospects for a return to the table, AP reports.

He told reporters accompanying him to an Asian security conference that some preliminary work on a new round of talks has been done but no dates have been set.

He said he's waiting to see if DPRK’s foreign minister comes to Bangkok for the Association of Southeast Asian Nations Regional Forum and is confident they will meet if he does, according to AP. The State Department said the lead US negotiator, Stephen Biegun, will be in Bangkok for DPRK-related discussions but has not released his schedule.

In Tokyo, Prime Minister Shinzo Abe said the DPRK's latest missile launch has no impact on Japan's security, and that Japan was working with its allies over the situation in the region, reports Reuters.

Separately, Chief Cabinet Secretary Yoshihide Suga said Japan would continue to seek a summit with the DPRK without conditions.

The official said a top staffer from the National Security Council hand-delivered photographs from the leaders' June meeting at the Korean Demilitarized Zone to a DPRK official last week. The Trump administration official spoke on the condition of anonymity because the official wasn't authorized to speak publicly.