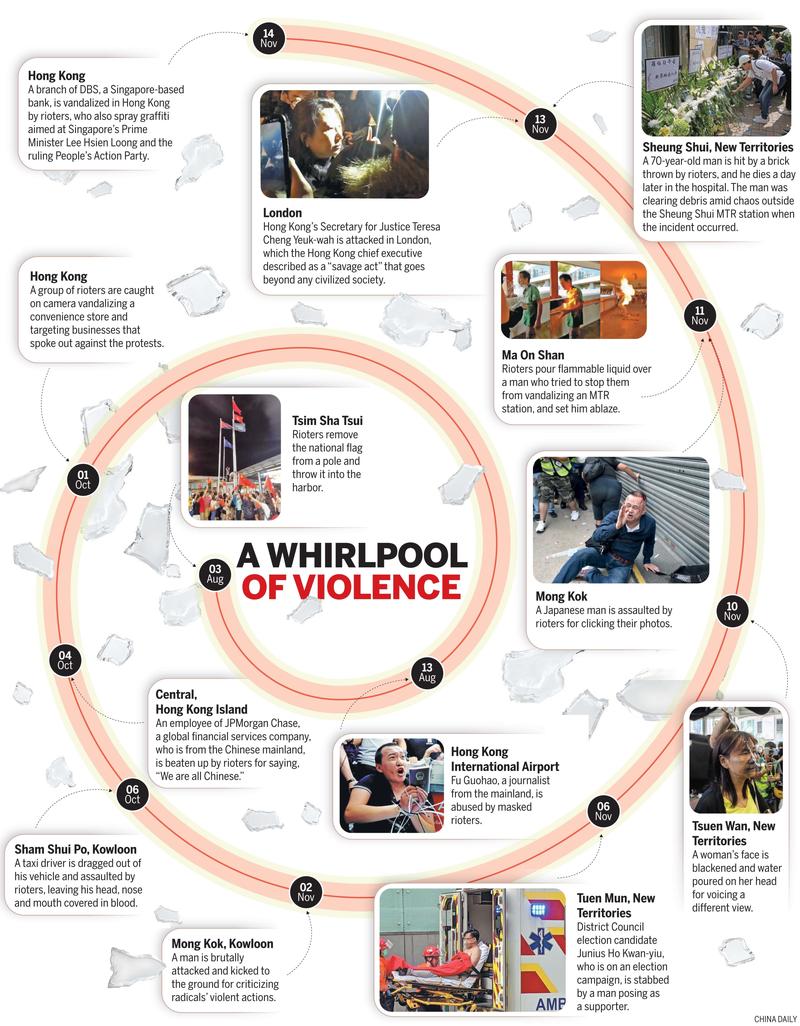 Police sealed off the vicinity of Hong Kong Polytechnic University in the early hours of Monday after violent overnight clashes with radical students and rioters holed up on university campus.

Mobs of rioters went on an arson spree outside the campus, setting footbridges and an armored police vehicle on fire.

Radicals launched some of the fiercest attacks on Hong Kong police on Sunday in pitched battles outside PolyU, shooting an officer with an arrow in the leg and showering a police armored vehicle with a hail of gasoline bombs.

An arrow fired by protesters lodged at the university pierced the left calf of a media liaison officer during a police operation in Hung Hom, as radicals continued to use  university campuses as strongholds since early last week.

Violence escalated near PolyU as a bridge linking the campus with an MTR station went up in flames, after being struck by a hail of gasoline bombs launched with giant catapults, setting an armored vehicle ablaze.

The public’s help in clearing up the roads has touched the hearts of many. They have shown their love for Hong Kong and injected positive energy into society

Police managed to put out the fire, but it strongly condemned such acts of violence, warning that anyone who stayed behind or helped the rioters could be charged with taking part in a riot.

In another incident, an anti-riot police officer was shot at with metal balls which struck his helmet’s visor right above his nose, but he escaped injury.

The police said the situation was aggravated by the use of a large number of lethal weapons, including flammable fluids and arrows, stored on the campus by radicals.

A spokesman for PolyU said several of the institution’s laboratories had been vandalized and “dangerous” chemicals had been stolen. The university has reported the incident to the police, considering its serious threat posed to public safety.Traffic in the vicinity of PolyU has been paralyzed since Nov 10, including the busy Cross-Harbour Tunnel.

Protesters blocked roads leading to the tunnel and damaged tra c facilities, while tollbooths at the entrance endured multiple fi res. Rioters also broke into the administration building of the tunnel on Friday, cutting off its power supply and damaging the fire alarm system. 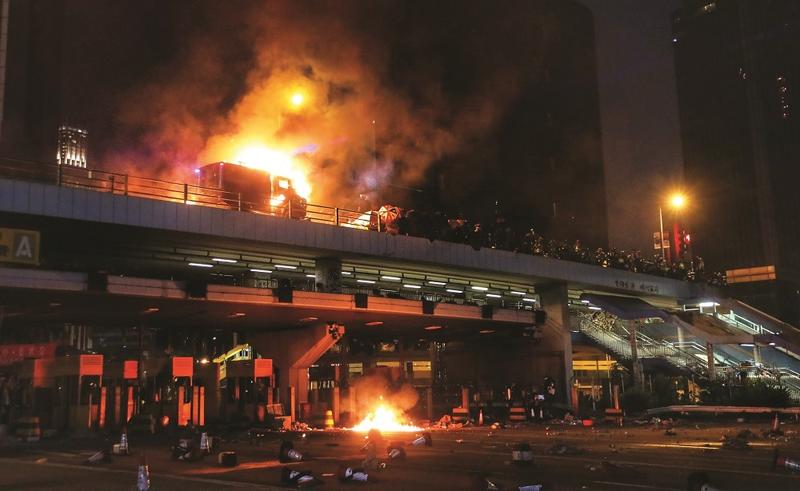 A burning police armored vehicle spews thick smoke on a flyover near Hong Kong Polytechnic University on Sunday. Radical students and rioters have turned the campus  into a stronghold in clashes with police. (PHOTO / CHINA DAILY)

Over the weekend, black-clad protesters also harassed and attacked residents who volunteered to clear the roadblocks and debris on thoroughfares near PolyU created during the most chaotic week-long violence in five months. They ordered the residents to leave and threatened to use force on them. They hurled bricks from the campus and drove the volunteers away with rods.

Residents in the New Territories also joined efforts with police to clean up after the radical protesters, who blocked the Tolo Highway and seriously vandalized the East Rail Line, forcing several stations to stay shut for the majority of the week.

“The public’s help in clearing up the roads has touched the hearts of many. They have shown their love for Hong Kong and injected positive energy into society,” a Hong Kong government spokesman said.

Hundreds of residents had also taken part in clearing up Pok Fu Lam Road near the University of Hong Kong, which has been used as another base by rioters. They were also harassed by groups of masked people, clad in black, who firebombed the street from an adjacent fl yover, but no one was hurt.

Brian, a US citizen in the finance sector, joined the clearing up on Saturday, together with his girlfriend.

Describing the acts of protesters as “insane”, he said many of them have been blinded by hatred. “They’re turning people against themselves,”he said.

Fred, a US teacher, cheered and applauded as vehicles were finally able to pass. He said he could not understand the protesters’ motives in setting up barricades at their school, adding that they have lost their minds.

"I love Hong Kong, but I’m not sure whether they like it,” he said.

Applauded by members of the public, the soldiers returned to their barracks after speedily completed their work which allowed traffic to resume.

It was not the fi rst time that soldiers of the PLA Hong Kong Garrison have taken part in public community work in Hong Kong.

In October last year, they helped to remove fallen trees on roads following the massive disruption caused by Typhoon Mangkhut.