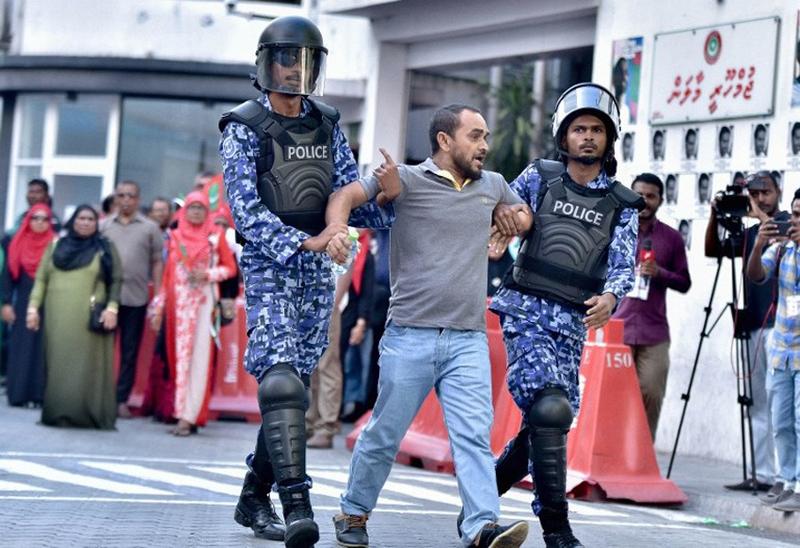 This March 2, 2018 picture shows Maldivian police arresting a man during a demonstration seeking the release of opposition leaders held in jail in the Maldives capital Male. (AHMED SHURAU / AFP)

COLOMBO, Sri Lanka — An emergency imposed in the Maldives after a court ordered the release of jailed politicians will be allowed to expire Thursday after allowing time for the government to investigate corruption allegations against the judges who issued the order, an envoy said.

The government "has no intention of extending" the emergency when its 30-day period expires, "barring very unusual circumstances such as widespread violence," Mohamed Hussain Shareef, ambassador to neighboring Sri Lanka, told foreign journalists in Colombo on Monday night.

The Supreme Court on Feb 1 had ordered several of the president's jailed political opponents released because of due process violations during their trials. Clashes between security forces and anti-government protesters followed and the Maldives declared an emergency that gave police sweeping powers, including making arrests, searching and seizing property, and restricting freedom of assembly.

Rights groups and several foreign governments had urged the government to respect the order and criticized the state of emergency.

Yameen's half-brother and former president Maumoon Abdul Gayoom was also arrested during the emergency, accused of conspiring with the opposition to overthrow the government.

Shareef said the emergency was required to investigate the allegations of bribery and corruption involving the court order to release the opposition politicians. He said the chief justice and the other judge have been charged for accepting bribes to topple the government through the court order while Gayoom and another court official will also be charged shortly. 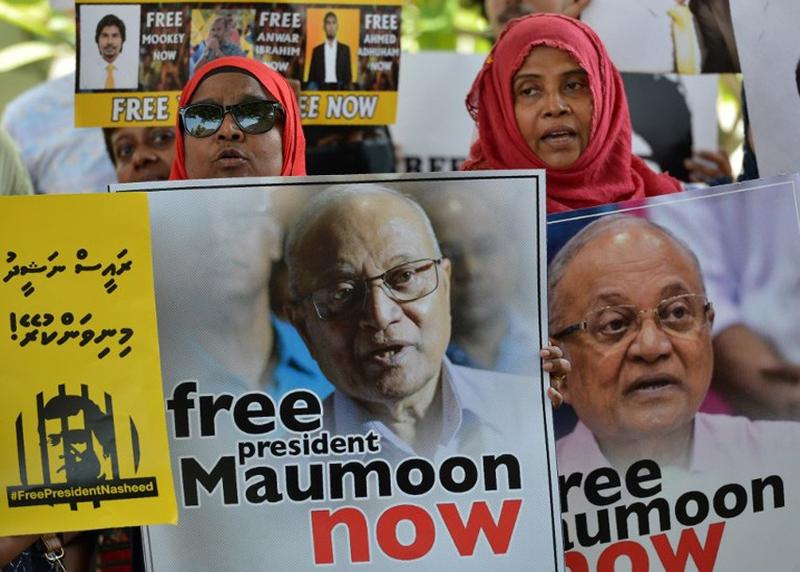 In this March 6, 2018 photo, supporters of former Maldivian president Mohamed Nasheed shouts slogans during a protest against the current Maldives President Abdulla Yameen demanding the release of opposition political prisoners in front of the Maldives embassy in Colombo. (ISHARA S KODIKARA / AFP)

He said investigations were continuing into 38 people still in custody.

Protests have been continuing since the declaration of emergency.

Two journalists were arrested Friday for allegedly making and uploading a video in which three people are impersonating police officers. The two journalists were remanded for 10 days. If found guilty, they can be sentenced to four months jail.

The country's traditional political alliances have been upended in recent years. Gayoom, now an opposition leader, is allied with former President Mohamed Nasheed, who unseated him in the 2008 elections. Nasheed, Yameen's most prominent rival, lives in exile and is among the politicians freed by the now-annulled court order.

The Maldives is an archipelago of more than 1,000 islands. Tourism dominates the economy, with wealthy foreigners flown directly to hyper-expensive resort islands.