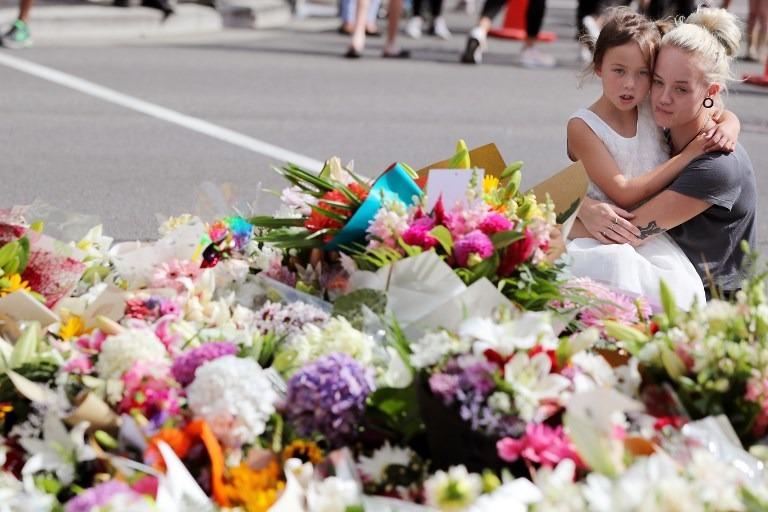 Residents pay their respects by placing flowers for the victims of the mosques attacks in Christchurch on March 16, 2019. (MICHAEL BRADLEY / AFP)

CHRISTCHURCH/WELLINGTON, New Zealand - The main suspect in mass shootings at two New Zealand mosques was charged with one count of murder on Saturday, a day after the attack that killed 49 people and wounded dozens, prompting the prime minister to vow reform of the country's gun laws.

Brenton Harrison Tarrant, a 28-year old Australian citizen, appeared in a Christchurch District Court and was remanded without a plea until his next scheduled appearance in the South Island city's High Court on April 5.

Handcuffed and wearing a white prison suit, Tarrant did not speak. His court-appointed lawyer made no application for bail or name suppression.

He was likely to face further charges, police said.

Brenton Harrison Tarrant, a 28-year old Australian citizen, appeared in a Christchurch District Court and was remanded without a plea until his next scheduled appearance in the South Island city's High Court on April 5

The attack, which Prime Minister Jacinda Ardern labeled as terrorism, was the worst ever peacetime mass killing in New Zealand and the country raised its security threat level to the highest.

Footage of the attack on one of the mosques was broadcast live on Facebook, and a "manifesto" was also posted online that denounced immigrants as "invaders".

The video footage showed a man driving to the mosque, entering it and shooting randomly at people inside. Worshippers, possibly dead or wounded, lay on the floor, the video showed. Reuters was unable to confirm the footage's authenticity and police urged people not to view or share it.

Police said two other people were in custody.

Armed police were deployed at several locations in all cities, unusual in a country where levels of gun violence are low.

Ardern said the main suspect was a licensed gun owner who used five weapons during his rampage, including two semi-automatic weapons and two shotguns. The weapons also appeared to have been modified, Ardern said.

"I can tell you one thing right now, our gun laws will change," Ardern told reporters, saying a ban on semi-automatic weapons would be considered.

None of those arrested had a criminal history or was on any watchlist in New Zealand or Australia. 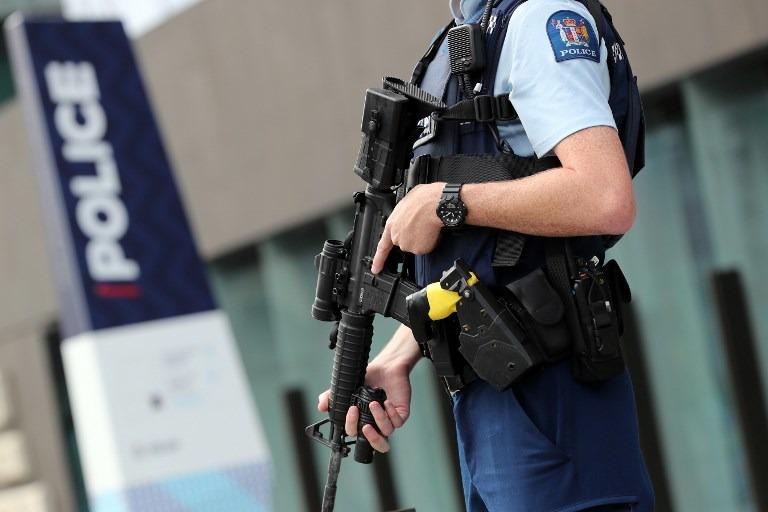 Armed police on the streets of Christchurch, outside the District Court and Police Station in Christchurch, March 16, 2018. (MICHAEL BRADLEY / AFP)

Rules in New Zealand require gun owners to be licensed, but unlike neighboring Australia, laws do not require all weapons to be registered, giving authorities poor oversight of the country's firearms, according to GunPolicy.org.

"The police don't have a clue how many guns there really are in New Zealand," said Philip Alpers, an Australia-based expert in gun laws and director of GunPolicy.org.

He said New Zealand, with a population of just under 5 million, had an estimated 1.5 million firearms.

Military-style semi-automatic rifles, banned in neighboring Australia, are permitted in New Zealand but must be registered.

"I can tell you one thing right now, our gun laws will change," Ardern told reporters, saying a ban on semi-automatic weapons would be considered

There was a heavy police presence at the hospital where families of the more than 40 wounded had gathered. Funerals were planned on Saturday for some of the victims, several of whom were born overseas.

Dozens of people laid flowers at cordons near both mosques in Christchurch, which is still rebuilding after a devastating earthquake in 2011 that killed almost 200 people.

Leaders around the world expressed sorrow and disgust at the attacks, with some deploring the demonisation of Muslims.

US President Donald Trump, who condemned the attack as a "horrible massacre", was praised by the accused gunman in a manifesto posted online as "a symbol of renewed white identity and common purpose".

Asked by a reporter in Washington if he thought white nationalism is a rising threat around the world, Trump said: "I don’t really. I think it’s a small group of people that have very, very serious problems. I guess if you look at what happened in New Zealand perhaps that’s a case, I don’t know enough about it yet."

Ardern, who flew to Christchurch on Saturday, said she had spoken to Trump, who had asked how he could help.

"My message was sympathy and love for all Muslim communities," she said she told him.

Political and Islamic leaders across Asia and the Middle East voiced concern over the targeting of Muslims.

"I blame these increasing terror attacks on the current Islamophobia post-9/11," Pakistani Prime Minister Imran Khan posted on social media. "1.3 billion Muslims have collectively been blamed for any act of terror." 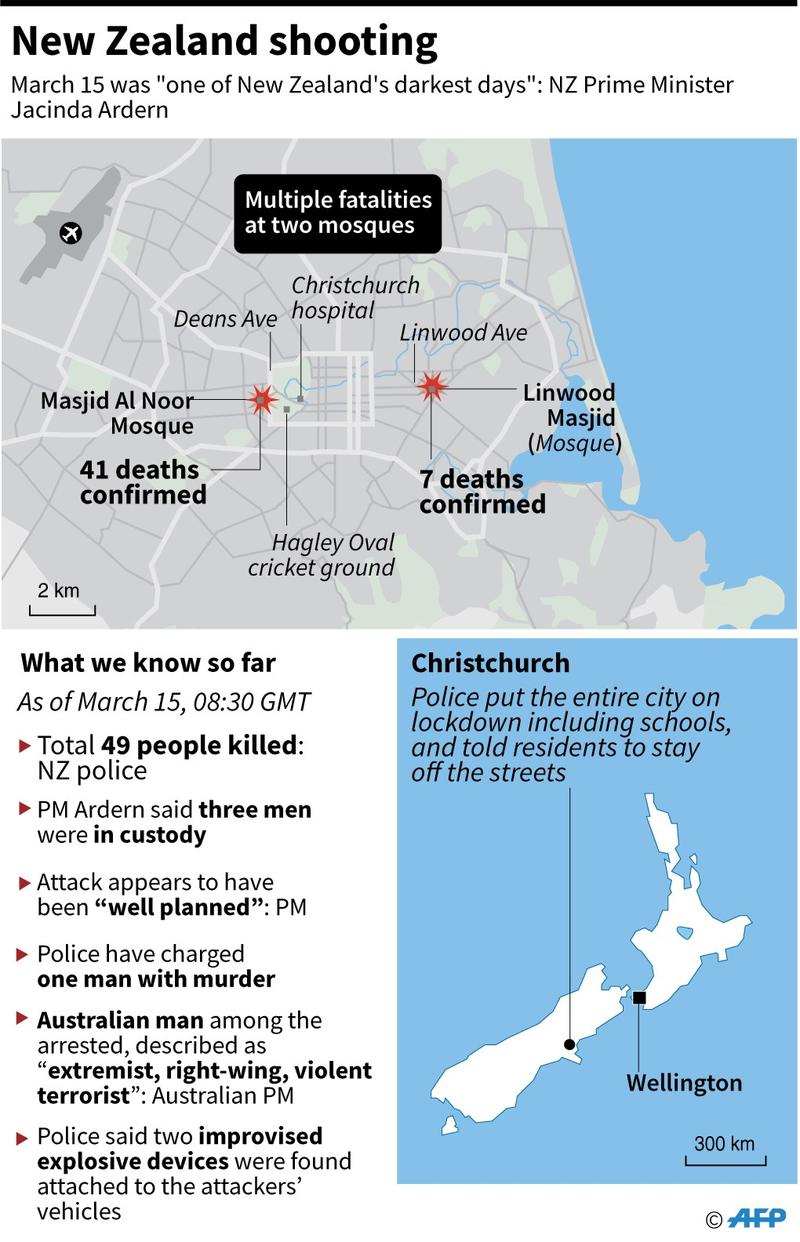 'SHOOTING EVERYONE IN THE MOSQUE'

One man who said he was at the Al Noor mosque told media the gunman burst into the mosque as worshippers were kneeling for prayers.

"He had a big gun...He came and started shooting everyone in the mosque, everywhere," said the man, Ahmad Al-Mahmoud. He said he and others escaped by breaking through a glass door.

"He had a big gun...He came and started shooting everyone in the mosque, everywhere," said the man, Ahmad Al-Mahmoud. He said he and others escaped by breaking through a glass door.

Facebook said it had deleted the gunman's accounts "shortly after the livestream commenced" after being alerted by police. Facebook, Twitter and YouTube all said they had taken steps to remove copies of the videos.

Ardern said she had asked authorities to look into whether there was any activity on social media or elsewhere ahead of the attack that should have alerted them.

Forty-one people were killed at the Al Noor mosque, seven at a mosque in the Linwood neighborhood and one died in hospital, police said.

Muslims account for just over 1 percent of New Zealand's population, a 2013 census showed, most of whom were born overseas.

A website set up for victims had raised more than NZ$1 million (US$684,000) in less than a day, and social media was flooded with messages of shock, sympathy and solidarity.

One image shared widely was of a cartoon kiwi, the country's national bird, weeping. Another showed a pair of figures, one in a headscarf, embracing. "This is your home and you should have been safe here" the caption read.