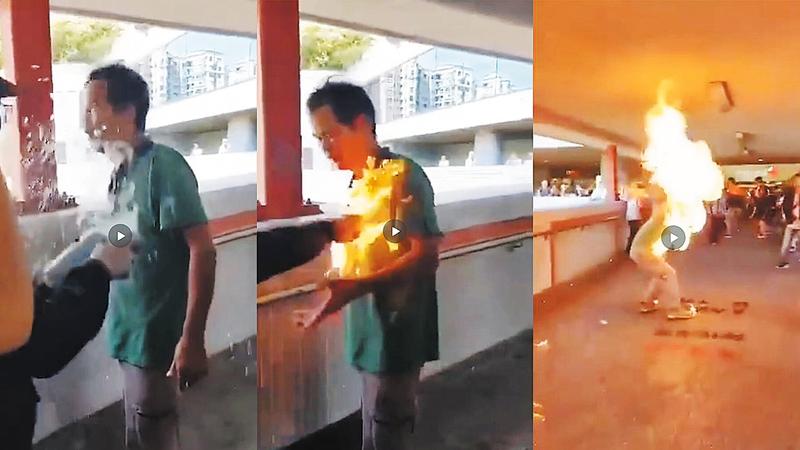 A man involved in a confrontation with radicals is splashed with flammable liquid and set on fire in Hong Kong on Nov 11, 2019. (PHOTO PROVIDED TO CHINA DAILY)

HONG KONG - The wife of the man set ablaze by radicals in Hong Kong said she was tearful, heartbroken and speechless to see her husband horribly in blaze, who has been an honest but apolitical man.

Her husband, a 57-year-old excavator driver surnamed Lee, was beaten up brutally, poured with suspected flammable liquid and set on fire by a radical in Hong Kong earlier this month after getting into a dispute with radicals for opposing their acts of vandalism.

Seeing him like this, I can't even talk, neither do my children.

"Seeing him like this, I can't even talk, neither do my children," said Mrs. Lee, whose husband was seriously burnt and is still in a coma at the hospital with second-degree burns on 50 percent of his body.

Lee has undergone the first round of skin grafting for his hands and still needs surgeries for his chest, abdomen and face, she said.

She said her husband is an honest man, but he has never talked politics at home or participated in any political events.

"He has had a hard life," she said, who never expected anything like this would happen to her family.

She said she has been cheering him up and asking him to hold up, telling him that a lot of people are supporting him and wishing him to get well soon.

She expressed gratitude to the supporters and said she hopes the radicals would cease violence and stop messing up Hong Kong as soon as possible.

Ordinary residents in Hong Kong are falling into victims of escalating violence as the prolonged unrest in the region, stemming from the extradition bill incident, entered another month. A senior sanitation worker died in hospital last Thursday after being hit in his head by one of the bricks hurled by radicals.

The central government has strongly condemned the radicals' criminal deed of setting a civilian on fire and called for prompt actions to arrest those radicals and punish them in accordance with the law.

Lee's case has been classified as an attempted murder by the police.