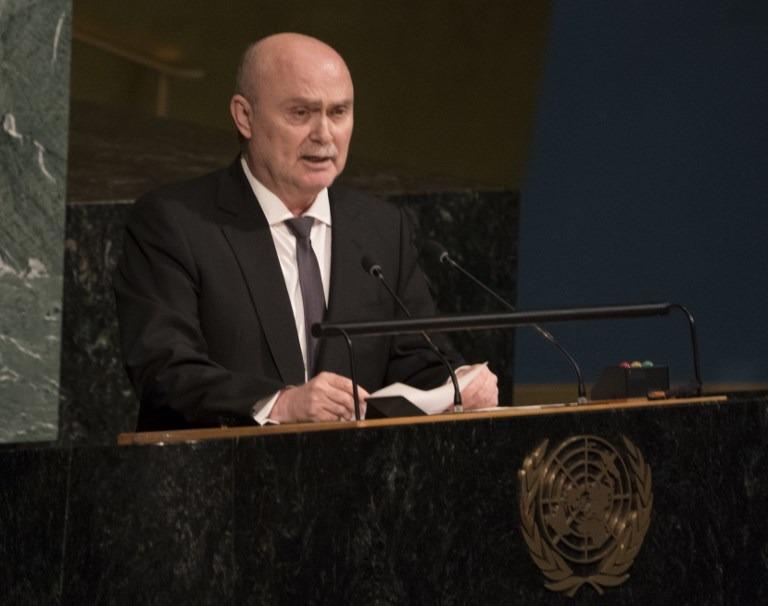 UNITED NATIONS — Turkey urged the international community on Tuesday "to vocally and actively support" Turkish calls for a cease-fire in Syria's last rebel-held stronghold in neighboring Idlib province where Syria and its allies have intensified attacks ahead of an expected offensive.

Turkey's Ambassador Feridun Sinirlioglu made the appeal after telling the UN Security Council that President Bashar Assad's regime seeks to legitimize its military operation in Idlib on the grounds that it's fighting terrorism.

It is especially important that Iran, Russia and Syria — the guarantor states in the so-called "Astana process" aimed at ending the violence in Syria

He warned that such an offensive would only "create further suffering, alienate and radicalize more Syrians" and "play into the hands of terrorists." He also warned that "an all-out military operation would result in a major humanitarian catastrophe" and "trigger a massive wave of refugees and tremendous security risks for Turkey, the rest of Europe and beyond."

That warning was echoed later by UN Secretary-General Antonio Guterres who said a full-scale battle in Idlib "would unleash a humanitarian nightmare unlike any seen in the blood-soaked Syrian conflict."

The UN chief said it is especially important that Iran, Russia and Syria — the guarantor states in the so-called "Astana process" aimed at ending the violence in Syria — "find a way in which it is possible to isolate terrorist groups and ... create a situation in which civilians will not be the price paid to solve the problem in Idlib."

Idlib is the last refuge for the Syrian opposition and home to close to 3 million people, including 1.4 million displaced Syrians hailing from provinces now controlled by the government and close to 1 million children. Syrian government forces, backed by Russia and Iran, have been massing troops for weeks around Idlib in preparation for an attack.

Russia's UN ambassador said "terrorists" can't be allowed to hold hundreds of thousands of people as "human shields" in Idlib where he said "tens of thousands" of fighters linked to al-Qaida, the Islamic State and other extremist groups are concentrated.

Vassily Nebenzia was briefing the council on last Friday's summit of the presidents of the three Astana countries in Tehran, stressing that they are committed "to continue helping with a definitive elimination of terrorism in Syria."

He told council members there is "an urgent need" to separate opposition fighters seeking a political settlement from the "terrorists" in Idlib, and appealed to those with influence to exert pressure to achieve this. He also stressed the need to prevent civilian casualties.

Turkey's Sinirlioglu, whose country supports the Syrian opposition, countered that "only a viable cease-fire would allow the creation of an environment to effectively fight terrorism."

He said this requires time and patience and is what Turkey has been trying to achieve in its separation efforts in Idlib.

"In order for our efforts to succeed, guarantees must be given to civilians and moderate opposition groups that they will not be targeted once they separate from terrorists," Sinirlioglu said.

US Ambassador Nikki Haley said the Trump administration hasn't seen "any actions to indicate that Russia, Iran and Assad are interested in a political solution."

"All we've seen are the actions of cowards interested in a bloody military conquest of Idlib," she said, citing a military escalation in Idlib this month including over 100 Russian and Syrian airstrikes.

Haley said the Astana process has failed "to stop the violence or to promote a political solution."

"Russia has the power to stop the catastrophe looming in Idlib," she said. "They still have the power to match their words of peace with deeds by working in Geneva to achieve a political transition in Syria."

But Russia and Iran rejected Turkey's call for a cease-fire at the summit in Tehran, she said, "and the Assad regime continued its brutal attacks."

The US, Britain and France have pledged to respond to any use of chemical weapons in Idlib.

And Haley warned Assad and his allies for a second time that any assault on Idlib would be considered "reckless" by the US and "the consequences will be dire. The world will hold them responsible."

Russia's Nebenzia responded saying attempts to separate the three Astana guarantors "will not be successful."

Many council members asked Russia to divulge its plans for Idlib, he said, but Moscow would like the Western coalition backing Syria's opposition to share its plans.

The position of the West became "nuanced," Nebenzia said, explaining that "what we hear is not linked to the use of chemical weapons" but they've "started saying force could be used if there's a military offensive in Idlib."